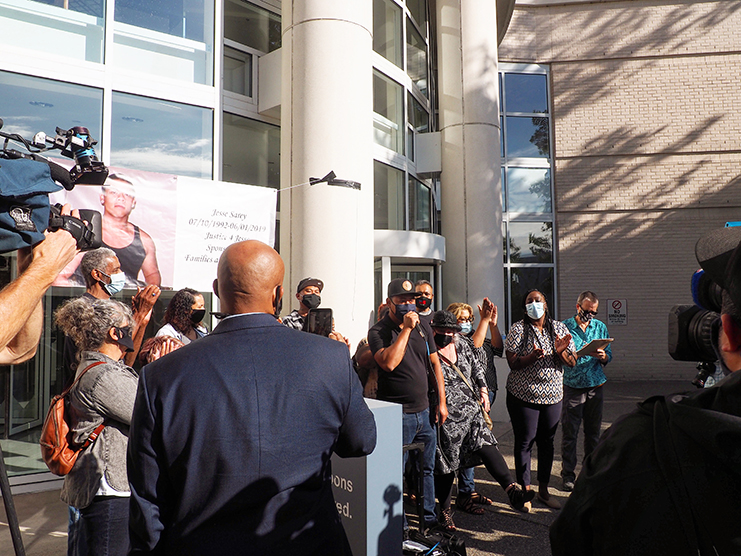 “Justice for Jesse…history is made,” said Steven, a family member of Jesse Sarey, speaking at a rally on Monday, August 24, 2020, in front of the Maleng Justice Center in Kent, following the bail hearing of Auburn police officer Jeff Nelson.

Nelson was charged on August 24, 2020 with second degree murder and first degree assault for the killing of Jesse Sarey. The indictment marked the first time a police officer has been charged with murder in 30 years in Washigton state and the first time since Initiative 940 was passed statewide by voters in 2018.

Nelson pled not guilty to both charges.

Sarey’s family and several organizers, including ForFortyTwo and Families Are The Frontline, led the rally following a bail hearing for Nelson.

A May 2019 encounter between Jesse Sarey and Officer Jeff Nelson resulted in Sarey being shot in the torso and forehead within 67 seconds of Nelson pulling up to Sunshine Grocery in Auburn. Sarey was sitting next to a freezer box when Nelson arrived.

Nelson has 77 use of force reports since 2014 and is responsible for three of the five Auburn police department shootings since 2011.

Prior to the passage of Initiative 940, the bar set to convict a police officer for murder was very high. Prosecutors had to prove “malice” or “evil intent” on the part of the officer.

Initiative 940 changed the legal standard for criminally prosecuting police officers in instances of deadly force, changing the focus to whether a similarly situated officer would believe that the use of deadly force was necessary to prevent death or serious injury to the officer or another person.

The case was investigated by the Port of Seattle Police Department as part of the Valley Investigative Team, an entity created upon the passage of Initiative 940 to investigate police use of deadly force.

In a video press conference on August 20th to announce charges against Nelson, King County Prosecutor Dan Satterberg walked through a video analysis of the shooting to explain how his office reached the decision to file charges.

“We are not seeking bail or to detain Officer Nelson,” said Satterberg during the press conference.

At the bail hearing, both the defense and prosecution asked for no bail and for Nelson to be released.

Sarey’s foster mother and spokesperson for the family, Elaine Simons, spoke at the bail hearing to argue for setting a bail amount.

“I implore you to give us the reassurance of knowing that Jeff Nelson will be arrested and held on bail, at least $1.5 to $2 million, in keeping with the severity of the offense. That he is not above the law,” said Simons during the bail hearing.

“I’ve been doing this…for 17 years and have never seen this,” said King County Superior Court Judge Victoria Galván in response to the prosecution’s decision to not ask for bail.

“The fact of the matter is, he’s charged with intentional murder…The idea that he’s wearing a uniform suggests he can’t be violent in any other circumstance is not an argument that sits well with this court,” she said.

Bail was set at $500,000 with a no contact order protecting the Sarey family, and house arrest and electronic monitoring if bail is posted.

Katrina Johnson, an organizer for Families Are The Frontline, hopes that the charges against Nelson and Initiative 940 will continue to help build equity for communities when it comes to holding police accountable. Johnson was instrumental in organizing the creation of Initiative 940. On June 18, 2017, her cousin, Charleena Lyles, was shot and killed by the Seattle Police Department following a 911 call that Lyles had placed.

“We weren’t [only] fighting for our loved ones, we were fighting for those people that we knew would follow us, and this law would benefit them, and Jesse Sarey’s family happens to be one of those families,” said Johnson.

“I had a conversation with [King County] Deputy Prosecuting Attorney Mark Larson. He told me before my cousin’s case was even finished being investigated that no police officer would be held accountable,” Johnson said. “That’s why I started working on Initiative 940.”

Despite the charges brought against Nelson, Johnson acknowledges gaps in Initiative 940 including the need for a special independent prosecutor for police deadly use of force cases and the absence of a mechanism to hold law enforcement agencies accountable when not adhering to Initiative 940.

In June, Governor Inslee created the Task Force on Independent Investigations of Police Use of Force, which Johnson has been appointed to, to continue reforms and address these gaps.

The day after Satterberg announced the charges against Officer Jeff Nelson, a King County Superior Court judge ruled in favor of Kent, Auburn, Renton and Federal Way in a lawsuit the cities brought against King County Executive Dow Constantine regarding the inquest process.

In January, the four cities filed a lawsuit that alleges King County Executive Dow Constantine stepped outside his authority when he augmented the inquest process for officer involved shootings to include an examination of a department’s training and its policies and an officer’s disciplinary history. The City of Seattle was formerly a party to the suit but has since dropped out.

The ruling pauses several inquest processes including one for the family of Charleena Lyles.

Families of those slain by law enforcement were also in attendance at the rally to support the Sarey family and call for further police reforms.

The families and organizers also hope to inform communities and galvanize more community members to come out in support.

“There needs to be justice, and we feel it is necessary for this family to get the answers they need and deserve, and we would like the police officer who killed Jesse Sarey to be held accountable for his actions. We would like to set the precedent that all police officers be held accountable for their actions,” said Nia Bryce of ForFortyTwo, a BIPOC youth- led group active in Kent.

“This is something that is impacting our community, he’s a Khmer youth that was gunned down by police. It seems hard but I hope that our [Khmer] community can begin to mobilize and be out there,” said Eric Yu, who traveled from Seattle to attend Nelson’s bail hearing and the rally for Jesse Sarey.

“I just ask that the community continue to be there and support this family, this is just the beginning,” said Johnson, during her speech to the crowd at the rally.

“All our pain and our struggle that we went through was for this family today. When one family wins, we all win.”