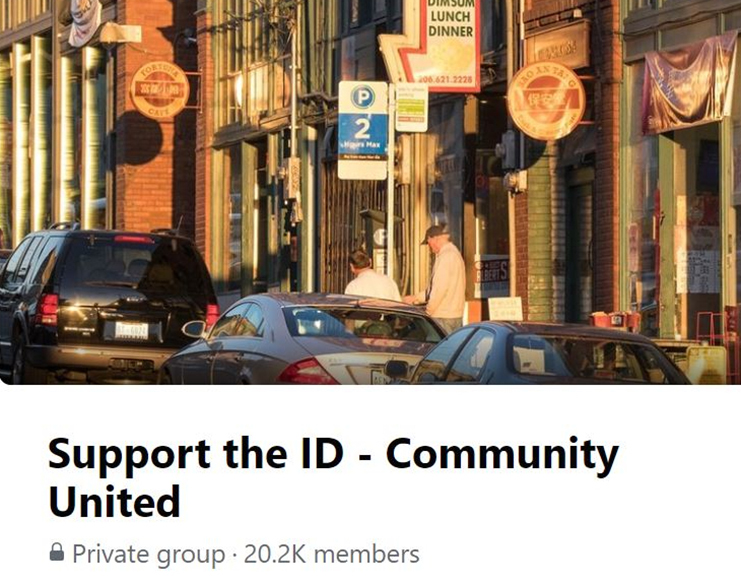 On July 12, Support the ID – Community United, a Facebook group formed at the start of the COVID-19 pandemic, was archived — essentially, locked. The group still exists and all its posts are accessible, but for now, people can’t make new posts or comment on old ones.

The group was started by Sarah Baker, Bill Tashima and a mutual friend, to support businesses in the CID and beyond that had been struggling since January due to xenophobic assumptions associating the Asian neighborhood with the coronavirus.

By the time it was archived, the group contained over 20,000 members. It served as a nexus of support for not only the CID, but businesses owned by people of color throughout the Seattle area. During the pandemic, people strategized ways to support the CID and communities of color with their dollars, labor and compassion.

But by July 12, Baker, co-founder and main administrator of the group, felt the group had become an unwelcoming place.

In a final post on July 12 explaining the decision to “put the group to bed,” Baker wrote: “The small glimmers of positive conversation and learning are wiped out by negative energy. Unnecessary calling out. Mean spiritedness.”

Baker explained that business owners were telling her they were afraid to post in the group. “Posts about small businesses are being completely overshadowed, again, not by the true dialogue and conversations that have been occurring, but by petty exchanges.” Baker continued: “When the call-out culture becomes so toxic that any true dialogue is completely stymied? That’s a problem.”

According to her post, the problems had “created an environment that is so hostile that I often wonder if we have completely lost sight of why we originally came together — to help each other.”

More than a month after archiving the group, Baker said in an interview that she often thinks about reopening it sometime in the future. “There’s not a day that goes by that I don’t think about the group,” she said.

But before that happens, she said, a lot will need to change.

Baker grew up near the CID and works as program manager at Communities Rise. She and Tashima, another co-founder of the group, are both active in the Japanese American Citizens League, and Baker was recently re-elected to the national board.

Baker had no idea the group would grow as quickly as it did. Shortly after it was created, about 1,000 people per day were joining it. People posted about their visits and takeout orders at restaurants and businesses in the CID and beyond and highlighted ones places that needed help. Members crowd-funded to buy meals for front-line healthcare workers, helped Southeast Asian flower sellers, volunteered to board up vandalized businesses.

“It was a way to connect and access a group of people with personal ties to the neighborhood during a time where that help and those contributions were much needed. (And we’re still in that time!),” said Joseph Guanlao, development and communications manager for the Seattle Chinatown International District Preservation and Development Authority (SCIDpda), in an email.

Guanlao said the group helped inspire an outpouring of donations to the CID Restaurants and other Small Businesses Relief Fund started by SCIDpda, the CID Business Improvement Area and Friends of Little Saigon, and raised awareness early in the pandemic about restaurants struggling during the first stay-at-home order. “It’s missed, for sure,” he added.

During the summer uprisings against racism and police brutality after the killing of George Floyd, the support continued for Black-owned businesses, and members discussed ways to fight systemic racism.

Ultimately, no single factor, but “the weight of many things,” led to Baker’s decision to archive the group.

For one, there was the emotional toll and time commitment of moderating a large group. The group’s two other co-founders stepped back from it for their emotional health, so Baker was in charge for a few months, while working full time and attending graduate school. Sometimes, she would be up until 3 or 4 in the morning, “dealing with some sort of emergency or having to talk to folks and listen to two sides of the story.”

There were instances of exchanges in the group leading to conflicts outside of it. Someone even complained about Baker’s work as a moderator to a nonprofit she is on the board of.

The semi-anonymity in the large group led to a hostile direction she had seen happen with other large online groups. “The overall atmosphere had gotten to the point that it wasn’t about lifting each other and supporting one another, it was more about tearing people down, and I’m not here for that,” she said.

The group’s focus had expanded beyond just the CID, and was sometimes a space to support other organizations and causes — which Baker was fine with. And she believed there was even some room for “debating people for the sake of debating.”

But, “at a certain point it became less about the support piece, and more about who is more woke?” Baker said. “That type of dialogue was pushing out some of the business owners and folks that were trying to learn. We’re all coming to race equity work from a different space, and not everyone’s on the same page.”

“I feel like there are instances where people were asking questions because they legitimately wanted to know, and wanted to learn and figure out, what are ways that I can be supportive of the Black community or why is it that I should not do x-y-z — that kind of stuff,” Baker said. “People asking legitimate questions, and just being told, ‘Well you’re a racist,’ and ‘That’s anti-Black’ and ‘You need to get out of here.’”

“I had so many people, dozens of people, reaching out to me on an almost daily basis, saying ‘Hey I really appreciate this space, but it’s reached the point where I don’t feel comfortable posting,’” she said.

She felt a sense of loss in choosing to archive the group — but also felt that the group becoming a truly inclusive space “just wasn’t going to happen any time soon, and without a lot of work that I think a lot of us frankly didn’t have time for.”

Recently, Baker talked with a business owner in the CID about reopening the group. The business owner suggested maybe Baker shouldn’t, saying the group “served a purpose at a specific point in time and it did that job,” Baker recalled.

Baker thinks there’s something to the idea that things evolve. Other groups have taken off from Support the ID, including groups supporting minority business owners, and businesses in Renton and White Center. And people have been continuing similar CID community work in the absence of Support the ID, Baker said — including the CID Night Watch group, and others.

It’s possible the group could open up again.

For this to happen, Baker said, there would have to be new ground rules to create an inclusive space where people can grow and learn, while also keeping out racism. There would also need to be a team or at least four people to take on the workload of moderating the group.

Whether it re-opens or not, Baker said she is proud of the work the group accomplished.

“At the end of the day, the power of community is just so incredible, and the fact that folks were so willing, at such a difficult point in time, to show up for each other, even if it wasn’t physically, was amazing.”