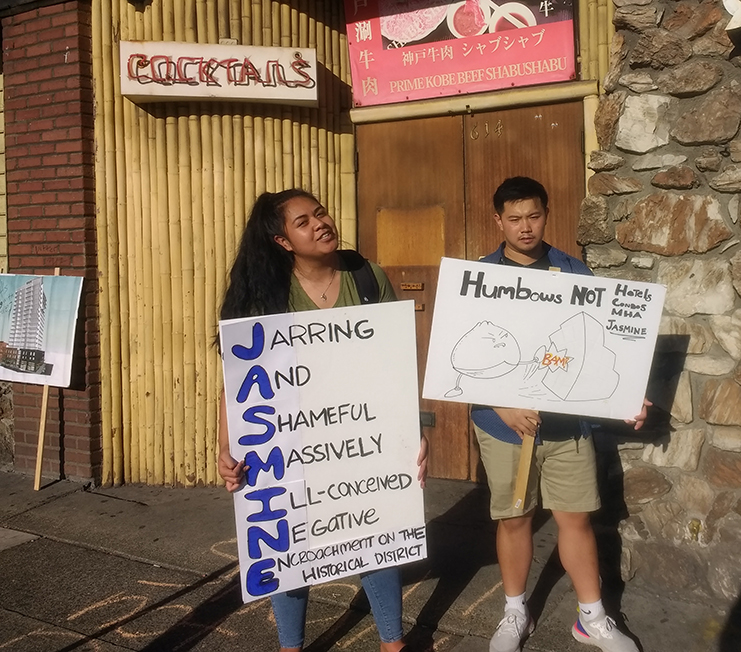 On August 27, members of the International Special Review District (ISRD) board inspected the outside of Bush Garden’s building to see its structural condition. Waiting for them, around 26 people held signs opposing a proposed 17-story development that, if approved, would likely lead to the building’s demolition.

Holding signs that read “History lives here” and “Stop Vibrant Greed, save the Bush Garden building,” people stood silently as representatives of developer Vibrant Cities, which owns the site — including CEO James Wong and members of the design team — showed members of the board features of the building’s exterior.

To build Jasmine, Vibrant Cities’s project, would require demolishing most or all of the Bush Garden building. The ISRD board reviews alterations to buildings and new constructions in the Chinatown International District (CID). As part of its rationale for demolishing the building, Vibrant Cities presented information to the board about the history and condition of the building.

“The rationale is based on structural lack of integrity and lack of upgrades to the building and lack of retrofit,” said Rebecca Frestedt, ISRD coordinator for the Department of Neighborhoods. “And so the board is looking at some of those conditions first-hand.”

At an ISRD meeting in May, structural engineer Bruce Zhong of DCI Engineers presented a report commissioned by Vibrant Cities that said the Bush Garden building is not stable because it was originally built as a one-story building, with the second and third floors added later. Zhong said the quality and workmanship of the building are poor even compared to other buildings of its era, and it remains a public safety hazard in the event of an earthquake. Zhong said the building would be unfeasible to retrofit to the safety requirements.

During the ISRD site visit, members of Vibrant Cities pointed out loose bricks, warping of the building, and noted that it was constructed on poor soil.

Vibrant Cities’s rationale for demolition was criticized by Eugenia Woo of Historic Seattle, who wrote in a letter to the ISRD board that the building could be rehabilitated, as other damaged brick buildings in the Chinatown-ID and Pioneer Square were.

Karen Sakata, owner of Bush Garden restaurant and bar, was among the demonstrators. Sakata doubted the condition of the building was as bad as the design team’s analysis, and said there’s great historic value to the building. “It holds so much history, not just for the International District and not just the Japanese American community, but Seattle,” she said.

In its heyday, the restaurant was like a little village for Japanese Americans, where everything from prom nights, funerals and fundraisers were held, Sakata said. On the upper floors of the building are the remains of tiny hotel rooms, where many immigrant laborers stayed. These floors were later used by the Toyo Club, a Japanese American crime organization.

Bush Garden restaurant and bar will move to Uncle Bob’s Place, a forthcoming housing project from InterIm Community Development Association (CDA). Part of the reason Sakata wanted to move was she didn’t think a 17-story project is appropriate so close to the historic parts of the neighborhood. “I think it’s just too imposing, it’s just too intrusive,” she said.

The demonstration included members of the CID Coalition, an organization which formed around concerns about gentrification and displacement in the CID.

“Today is about sending a message to the board that the community is watching,” said Nina Wallace, a member of the CID Coalition. Wallace said the board does not listen to community feedback enough. People will often show up to ISRD meetings and ask, “Why is there no affordable housing in this building, or why are you not taking into account how this is going to impact the neighborhood and residents?” Wallace said. “Every time what the board tells us is that equity and affordability is not within their purview. So what we want to show is…this should be a concern for them, that the community wants to see equitable development, and affordable development.”

Despite its historic significance, the interior of Bush Garden is outside the purview of the ISRD board, said Frestedt. The board also has no jurisdiction over which tenants occupy the building.

After the site visit, Frestedt thanked members of the community for being engaged, and answered questions from the public about the board’s role and process. “I just don’t want them to tear down this building,” one woman said.

The board did not express comments of feedback during the site visit, saving these for the next public briefing. The board will discuss the site visit at a future public meeting, Frestedt said, but a date has not yet been set.

Letter to the editor: There is still hope for Bush Garden