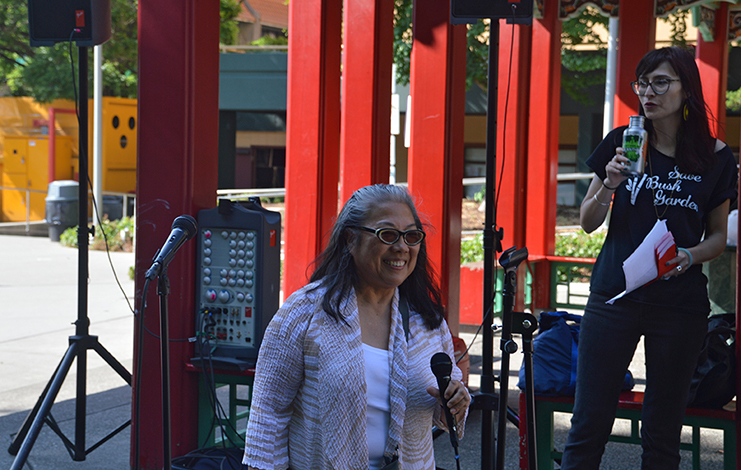 Bush Garden, the legendary Japanese restaurant and karaoke lounge, will be moving from its current location. In what could be called a case of kismet, its new home will be Uncle Bob’s Place, a new low-income housing project developed by InterIm Community Development Association.

Bob Santos, the building’s namesake, worked tirelessly to preserve the Chinatown International District. He was also a regular at Bush Garden, a mainstay of the neighborhood since 1957.

Uncle Bob’s Place will be built on the site formerly occupied by the Four Seas Restaurant, with construction set to be complete in 2021. It will have 126 units of affordable housing, with commercial and community space on the ground floor managed by the Chan family, owner of Tai Tung Restaurant and the Four Seas.

In 2016, real estate developer Vibrant Cities, run and co-founded by James Wong, bought the Bush Garden building. They are planning a 17-story market-rate development called Jasmine and offered Bush Garden a spot in the building.

Bush Garden owner Karen Sakata spoke with the International Examiner about what this move means for Bush Garden, its legacy in the neighborhood and why she decided to turn down Wong’s offer to stay in Jasmine.

International Examiner: We talked last August for an article about updates to Bush Garden. Can you bring me up to speed on the last nine months?

Karen Sakata: Things are pretty much how they were before when we talked except now we know we’re planning to move and we’re still trying to figure out all the details about what that might look like, how we might get creative and think about bringing Bush into the 21st century.

IE: And what does that mean?

KS: You know I really cherish the history of Bush, but it was a function of time and place. The thing that resonates still is the role that it played in community. A lot of the Japanese American community has changed significantly, there’s Japanese restaurants everywhere and more people travel internationally, so it’s not unique to be a Japanese restaurant. So what is the identity? I’ve thought a lot about it and the role that the restaurant played in the midst of all the stuff that was going on was something that I really feel was important so I want to use that as the grounding for moving forward if that makes sense.

IE: Yeah it does.

KS: And the other thing is, we haven’t been a live music venue but I know I’ve had thoughts of trying different things. One thing that Uncle Bob lamented about was that back in the day the International District had a lot of music from different groups. It was a lively place so I know just to bring that back is a possibility or something that we would want to consider.

KS: Well it’s kind of two separate things. Bush has been an informal space where people can come down to have food and drink, maybe they’re meeting at the same time, or they come down after a big community event to sit back and relax or to talk about what happened. I think the vision for the community center is slightly different than that. There’s a lot of community organizing that happens and if there was an event that people wanted to hold, they’re thinking of having it used in that fashion. It could be connected but not part of Bush. We could support each other in creating that space to make it really central to the community and everybody’s second living room.

IE: When you talk about the details that are yet to be figured out, can you share what those details are?

KS: No, I mean I think that’s one of things we’re still thinking through. You know every space has it’s own identity. The building where Bush is at now very much carries so much energy and spirit from people over all these years. You can’t transplant that kind of energy. You almost have to recreate it or try to create a new version of it and still carry on with intentionality and making sure the new space can serve the same purpose to community.

IE: It sounds like this is an intentional move to something different.

KS: I’m not gonna be around forever so it’s planning for the future, for what we want the International District to be and what we want to bring people into the community, how we want to do that and what it is about — trying to be authentic and true to the neighborhood, honor the history of the neighborhood, bringing people into it with that appreciation. I spent a lot of time in the ID as a young kid and I think about what it meant to have a place like the International District to go to. I think that story of the international District is really important and I don’t want to lose that. I mean yes to economic development, but that doesn’t mean we have to lose who we are, doesn’t mean we have to lose our community.

This is a neighborhood where kids and families and people of all ages and all income can live side by side. I know we need more density but who is it for and how do we keep community? Just because we’re not rich – can’t we live and work in the same neighborhood and not have to travel for an hour?

IE: Why do you feel like you can’t continue to build this type of space in your current location since the developer has said that you could stay in Jasmine?

KS: Well, it’s a couple of reasons. One is that we can’t afford to move twice. We’d have to move out and then move back in. But totally separate from that is, I don’t believe a 17-story building belongs right there. It doesn’t fit into the neighborhood. I know he has a good story, but I just feel like — well why aren’t you building a space for people like your family?

We asked for things like, well connect the people in the building to the neighborhood. There have been some good ideas that came out about that. Across the way from Hing Hay Park, there they used to be a theater that showed films from Japan and China and the Philippines, and I used to go there every Friday night with my grandmother. We don’t have any place in Seattle that. I mean wouldn’t that be interesting?

It’s a strong parallel. I just find it really interesting that all of a sudden, people are saying the building is irreparable, but people sat on it for 20 years and did nothing. Even if it has been identified then I guess they should be asking us to leave [which they aren’t]. You know everybody tells their story to fit their narrative of where they want to go with things.

If I won the Lotto, it would be very cool to figure out a way to showcase what Bush was and how it fits into Seattle’s history, the community’s history and immigration in the United States as a whole. We still have the capacity to tell that story and it’s all in the ID and that building holds a lot.