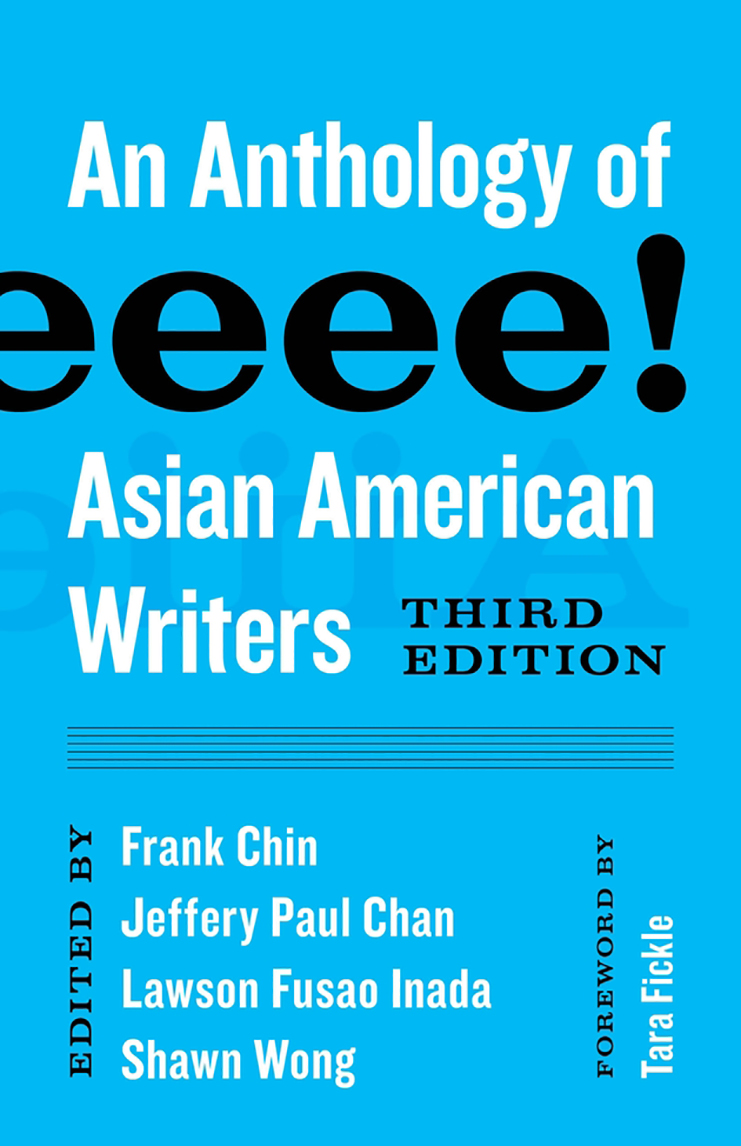 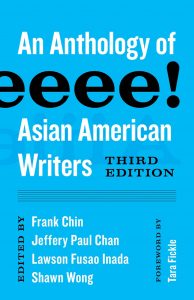 What if Aiiieeeee! is still waiting for its moment? It feels odd to say this about a 45-year-old anthology that’s seen multiple editions and a sequel, secured the reputations of a shelf’s-worth of authors, and helped generations of readers envision Asian American literature. But Aiiieeeee! is an odd book—it never conformed to anyone’s expectations.

This Thursday night, January 9, Elliott Bay Books will host a conversation with Wong and Tara Fickle, author of a sharp forward to the new edition, and Wong will be speaking on January 30th at UW’s Kane Hall.

Aiiieeeee! is, first and foremost, a collection of great writers, who can transform what you think Asian America was and could be. Nonetheless, the book is controversial, particularly in academic circles. As Fickle writes, “Asian Americanists have often been far more familiar with what is wrong with Aiiieeeee! than with Aiiieeeee! itself.”

Truth is, Aiiieeeee! has been more legend than book for decades. That legend has two main components: first, that the idea of Asian American literature began with Aiiieeeee!; and second, that its original sin was a sexist, homophobic, ethnocentric, anti-immigrant “cultural nationalism.” As it goes with legends, neither claim is quite true.

This legend was largely secured during the book’s last major revival, at the end of the 1980s. The lifting of racist immigration laws in 1965 had led to an unexpected surge in arrivals from across Asia, including educated professionals, whose children, then gaining a foothold in elite universities, provided the basis for a renaissance in Asian American arts. Aiiieeeee! rode this wave, with the release of a new edition and a sequel, The Big Aiiieeeee! But the signature 1990s anthologies—Jessica Hagedorn’s Charlie Chan Is Dead, or if you were really hip, Walter Lew’s Premonitions—reveled in the ethnic diversity of post-1965 generations.

From then on, many critics reduced Aiiieeeee! to the weakest claims in its preface and introduction, or treated it as a proxy for the persona of Frank Chin, whose performance of the uncompromising provocateur was hardening into caricature. But as a strawman, Chin was invaluable: the Aiiieeeee! origin story allowed critics to celebrate an Asian American literature whose diversity and feminist and queer politics exceeded its narrow beginnings.

Only Aiiieeeee! wasn’t really the first. Asian American literature, as an idea, began as the cultural wing of the Asian American movement. Beginning in the mid-1960s, this movement established the concept that U.S. Asian ethnic groups were historically linked, and that their political destiny lay in the revolutions of “Third World” (nonwhite) people at home and abroad.

Arts were essential to the movement, but its preferred forms were cheap and DIY: posters, comics, music, performance poetry. Art was meant to be timely, not timeless; novels, which took too long to write, were out of style. Although Aiiieeeee! writers were active, a more representative figure might be the poet-organizer Janice Mirikitani, who edited AION magazine.

There was sexism and homophobia in the movement, but plenty of feminism too, including a notable contingent of lesbian poets. Many international students participated, and immigrants’ issues were a major concern. These histories were inadvertently obscured by the origin story that developed from a reductive critique of Chin.

What became Aiiieeeee! grew up alongside the movement. In the 1971 Asian American studies reader Roots, Bruce Iwasaki engages with Chin and Inada, before championing the activist poetry of the dancer and musician Nobuko Miyamoto. The prefatory material to Aiiieeeee! first appeared in the antiwar Bulletin of Concerned Asian Scholars, in a special “Asian America” issue, coedited by Wong.

The anthology was rejected by numerous publishers before reaching Charles Harris, of the historically black Howard University Press. Ishmael Reed, who hosted the party where Chan, Chin, and Wong first met Inada, helped make that connection, and allowed Chin and Wong to take over volume III of his Yardbird Reader.

As an anthology, Aiiieeeee! had competition—Iwasaki lists a handful of predecessors and contemporaries in Counterpoint, Roots’s 1976 sequel. But what made it an odd fit for the movement—its interest in literary history and traditional genres—was perfect for the years of strategic retreat that followed, as dreams of Third World revolution receded into the institutionalizing multiculturalism of the Reagan era.

Aiiieeeee!, one might say, was always more of an ending than a beginning. You can read it as the closure of the movement’s radical artistic visions—or, more generatively, as a late blossoming of the old Asian America that produced it.

Forged by multigenerational histories of exclusion, West Coast-style segregation, and migrant labor, pre-1965 Asian America was profoundly transformed by subsequent immigration. The Aiiieeeee! editors’ curiously narrow restriction of Asian American identity to U.S.-born Chinese, Japanese, or Filipino Americans turns out to be less ethnocentrism than a rough attempt at historical specificity—before 1965, excepting smaller numbers of Korean and South Asian Americans, these were the dominant ethnic groups.

In 2020, the experiences of older and newer Asian American communities are again converging, and, like the radicalism of the 1960s and 1970s, Aiiieeeee! seems newly relevant. Yes, the editors’ theorizing remains problematic—it fails to synthesize the richness of a transpacific Anglophone Filipino literature, and its challenge to racism is caught up within the redemption of a narrow form of masculinity. But what matters most are the writers, not the theories.

Bulosan is here, and Okada, and the still-neglected Toshio Mori. Wong’s gorgeous, lyrical novel Homebase is excerpted, as is Chin’s Chickencoop Chinaman, which exposes a complex doubt and vulnerability behind his dazzling verbal aggression. There is the unexpected experimentalism of Sam Tagatac’s “The New Anak,” and a resolute double dose of Nisei feminism from Wakako Yamauchi and the incomparable Hisaye Yamamoto.

Perhaps the biggest surprise is the acknowledgement that “Wallace Lin” is actually the poet and editor Russell C. Leong. Fickle suggests that his use of a pseudonym was “inextricable” from the oblique same-sex desire of “Lin’s” “Rough Notes for Mantos,” but despite receiving a copy of Aiiieeeee! from his father, a writer himself, Leong presumed his secret was safe. Nonetheless, Charles Leong later told Chin that he suspected “Lin” was his son!

Who knows what other revelations remain to come. Could Aiiieeeee! turn out to be a late bloomer?