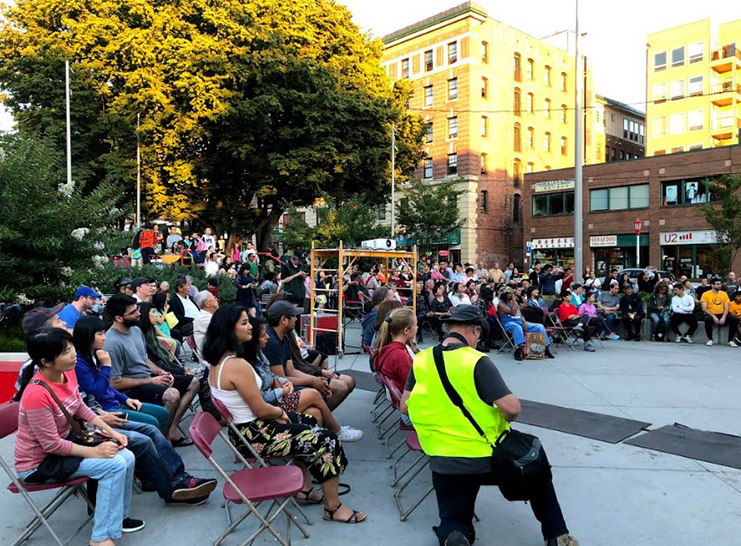 Seattle Asian American Film Festival (SAAFF), in partnership with InterIm CDA and Seattle Parks and Recreation presents its annual Chinatown – International District Summer Cinema the first four Saturday nights in August at Hing Hay Park. The free events, which include live entertainment before each film, are family-friendly and open to the public. On August 3, 10, 17 and 24, the screenings will take place on the west side of Hing Hay Park (which means “park for pleasurable gatherings,”) 423 Maynard Ave. S., Seattle. The films will begin at sunset, after special live performances beginning at 7:30 PM. See the full schedule at https://seattleaaff.org/2019.

Rachel Chu is happy to accompany her longtime boyfriend, Nick, to his best friend’s wedding in Singapore. She’s also surprised to learn that Nick’s family is extremely wealthy and he’s considered one of the country’s most eligible bachelors. Thrust into the spotlight, Rachel must now contend with jealous socialites, quirky relatives, and Nick’s disapproving mother.

(Cantonese, with subtitles) In a desperate and unjust land, where government corruption rules the day, only one man has the courage to challenge the system and fight back. They call him “Iron Monkey.” Under the shadow of night, in the silence before dawn, he fights to give hope to the poor and the oppressed. Although no one knows his name and no one knows where he comes from, his heroism has made him a living legend to the people and a wanted man to the powers that be.

(English dub) Presented in conjunction with Japantown (Nihonmachi Night), Mirai tells the story of a young boy named Kun who feels forgotten by his family when his little sister Mirai arrives. Running away from home, Kun stumbles upon a magical garden that serves as a time-travelling gateway where he encounters his mother as a little girl and has a series of adventures with his baby sister, who is all grown up, opening a new perspective on his world.

Carl Fredricksen, a 78-year-old balloon salesman, is about to fulfill a lifelong dream. Tying thousands of balloons to his house, he flies away to the South American wilderness. But curmudgeonly Carl’s worst nightmare comes true when he discovers a little boy named Russell, voiced by Jordan Nagai, a stowaway aboard the balloon-powered house.