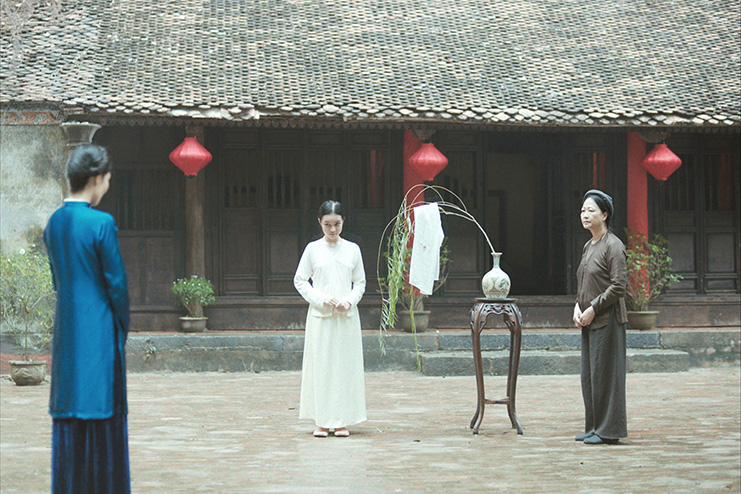 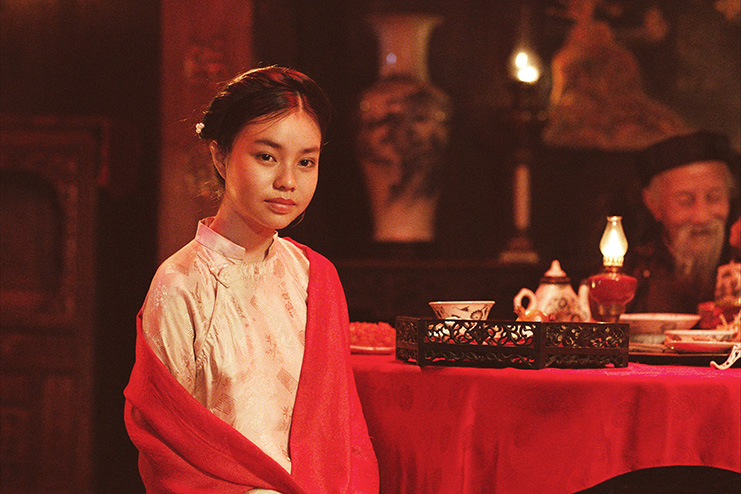 Ash Mayfair’s beautiful and sensual debut feature film reads like poetry to the mind’s eye. At the surface of her work lies a calm simplicity and luxuriant beauty, all of which extol the isolated countryside of supposed late 19th-century Vietnam. What bubbles beneath is a complex undergrowth of emotions hidden beneath a veneer of complacency and acceptance. These surroundings and circumstances are viewed through the eyes of 14-year old May, the third wife of Hung, a wealthy landowner old enough to be her father.

The Third Wife is a heartfelt homage to two women in Mayfair’s family: her grandmother and great-grandmother. Her inspiration rests on the stories these women told of their lives, both of whom had arranged marriages. Her great-grandmother was 14 when she was wed into a polygamous family.

Due to these stories, Mayfair has held a lifelong interest in women’s sexuality, the transition period from childhood to adulthood, and the struggle individuals encounter under a conservative patriarchal society.

The screenplay, which May wrote as her thesis project while getting her master’s in filmmaking at NYU’s Tisch School of the Arts, was recognized for its potential early on. It won awards from the Spike Lee Production Fund and the Hong Kong Film Forum, which helped kickstart the process of making the film a reality. The movie has already garnered countless awards and accolades since its world premiere last year at the Toronto International Film Festival. Although it made a brief appearance in Seattle during SIFF, it is set to return from July 26-28 at SIFF Cinema Uptown.

Showing in 27 other countries, The Third Wife has already sparked controversy in Vietnam. The country was embroiled in a media frenzy over the movie’s young female star Nguyen Phuong Tra My. Seen in a few highly intimate and sexual scenes with much older actors, Nguyen was 13 when filming started. Mayfair was fined $2,140 for not following censor requests to cut three scenes before screening. Out of concern for the actress and her family, whose reputation was being smeared online, Mayfair withdrew the film just four days after its release on May 17.

Mayfair and co-producer Tran Thi Bich Ngoc have stated that the cinema department in Vietnam had approved the script before shooting and that the production and distribution of the film didn’t break any laws. They have also said Nguyen’s mother represented her when she signed the contract. The filming was always supervised by the mother, and special precautions were taken when filming sensitive scenes.

It is possible the script Mayfair presented to the cinema department was not entirely representative of what they had used for production. Mayfair did several rewrites during preproduction in Vietnam. She also held improvisation sessions with the cast, some of which ended up in the movie. The cast had also contributed their knowledge of Vietnamese rituals and traditions. Conditions would also change on set, forcing Mayfair to seek alternatives that inspired new ideas.

Mayfair’s decision to ignore censor requests probably come twofold. Showing the film in its entirety to her grandparents may have been priority. Her grandfather, who is wheelchair-bound, actually rode in a vehicle for three hours to watch the movie in the nearest city. She also wanted to encourage female artists to tell their stories and to address the inequality women still face in Vietnam.

“This was my love letter to Vietnam, which is why we decided to go back there to make the film and to hire people and to create jobs, despite all the possible conservative attacks that we knew would happen,” she said in an interview with Film in Revolt. “The reaction it is getting [in Vietnam] is completely unwarranted…If this was the reaction of a very feminist movie, then how can anybody make anything more controversial or more politically different?”

One of the themes that immediately caught my attention was female sexuality. The theme almost seems risqué and completely out of place in a conservative, traditional, patriarchal Asian society, as if females of that time period had only been vessels or embodiments of meekness, servility and obedience. Ashfair challenges these tropes and brings layers of depth and complexity to the characters, defining them as individuals with different desires, goals and needs. To see female sexuality addressed in one so young as May in this setting seems almost revolutionary.

Although May has just been wed to Hung, she is immediately captivated by Mistress Xuan, the second wife, during the wedding festivities. Such brief moments of attraction become full-fledged when May observes her engaging in a forbidden tryst. Her feelings are forever changed when she realizes she is in love with Xuan. Sexually stimulated for the first time, she starts to explore her sexuality.

Interestingly, May never finds her attraction at odds with society, but perhaps this is to signify just how naive and innocent she is.

The film can also be seen as a fascinating character and relationship study. For instance, the connection between May and the two wives, and even between May and Xuan’s two oldest daughters, is an intriguing dynamic to observe. In terms of the wives, May is closest to the second wife, but overall May is closest to Xuan’s two oldest daughters, Lien and Nhan. Although she is supposed to be a mother figure, May is more like their slightly older sister as she plays with them and looks after them.

The contrasting personalities of the two sisters are also engaging to watch. While Lien embodies the typical meek aesthetic and behavior expected of girls, Nhan is like a wild, unbridled horse. Her unkempt hair, boundless energy and indifference to dirt, has her acting more like a stereotypical boy. At one point, Xuan laments, “Why can’t you act like a real girl?” As if to channel a response to this question, Nhan says a curious thing to her sister: “When I grow up, I will become a man. I’ll be a man and have lots of wives. I prayed to Buddha. It will happen!”

The wives’ relationships with each other are intriguing. While they seem bonded by their shared status and have a sense of camaraderie, it soon becomes apparent they are all competing with each other and vying to become the highest-ranking wife by bearing a legion of sons. The first wife, Mistress Hua, whose first and only child is a son, still yearns for a second child.

Perhaps this is one of the reasons why Hua is distant toward May: her status as “the real lady of the house” remains transient and subject to change. Xuan, on the other hand, stopped praying for a son after the birth of her second daughter, but whether she has truly stopped trying is questionable.

The Third Wife is a beautiful and thought-provoking film that invites audiences to witness May’s growth as she moves among the different roles in her new life. From the start, May is never seen as a victim: The look on her face is resolute and determined as she is taken to her new family. What the film lacks in dialogue it makes up for in rich symbolism, using the setting’s natural beauty to reflect May’s emotions; it is a visual treasure. Although this takes place in the late 1800s, it is important to note that these things still happen in other parts of the world, making the movie all the more relevant and poignant.