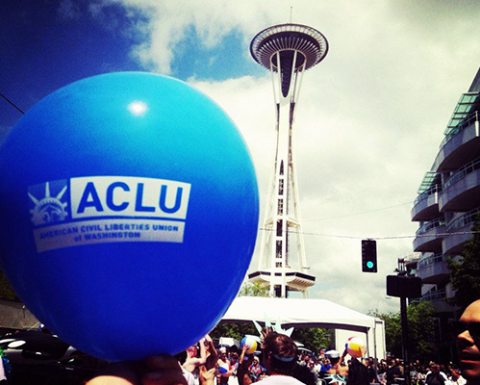 The American Civil Liberties Union of Washington (ACLU-WA) is seeking an experienced
attorney for a two-year term (may be extended, subject to funding) to build, file, and litigate complex civil actions in state and federal court to protect and preserve civil liberties for all Washingtonians.

The ACLU-WA has increased its level of operations in order to fight the current administration’s broad attacks on civil liberties while continuing to vigorously move forward the work of our existing projects—much of which will also be affected by the actions of the Administration: protecting the rights of immigrants; criminal justice reform; the school to prison pipeline; using religion to oppose LGBT rights and reproductive freedom; and privacy, surveillance, and technology. Our goal is not just resistance; it is progress.

This new attorney position will give us the capacity to push forward our affirmative agenda as well as engage in fast-moving, defensive battles against the current administration’s policies.

OVERVIEW
The ACLU of Washington is a leader among state affiliates of the American Civil Liberties
Union, the country’s premier guardian of liberty. We work in courts, legislatures, and
communities to protect and extend American rights to freedom, fairness and equality. The ACLU is both nonprofit and nonpartisan.

Whether it’s fighting the Muslim ban, ending mass incarceration and police brutality, achieving full equality for LGBT people, protecting privacy in the digital age, or protecting the most vulnerable and marginalized among us, the ACLU is willing to take on tough civil liberties cases and issues to defend all people from government abuse and overreach. And we’re successful. In the past couple of years in Washington State, we’ve won a nation-wide preliminary injunction against the Trump administration’s refugee ban, damages for a man wrongfully detained by a local police department because he was an immigrant, reforms on the use of solitary confinement for children in Grays Harbor County, the right to documents describing the Tacoma Police Department’s ownership and operation of a cell site simulator device, and a nationally significant lawsuit for a gay couple who was denied service by their local florist.

We have also filed a number of groundbreaking cases, including a First Amendment action
against ICE and the Border Patrol, the first lawsuit in the country about the right to medication assisted opioid treatment for people in jail, and a suit against the state for failing to prevent the disproportionate discipline of children with special education needs.

The ACLU stands for the principle that every individual’s rights must be protected equally under the law, regardless of race, religion, gender, sexual orientation, age, disability or  national origin. The ACLU-WA’s staff of 40+ employees and numerous volunteers work in a fast-paced, friendly and professional office in downtown Seattle. We are supported by more than 75,000 members, activists, and donors.

The ACLU is an equal opportunity employer. We value a diverse workforce and an
inclusive culture. The ACLU encourages applications from all qualified individuals without regard to race, color, religion, gender, sexual orientation, gender identity or expression, age, national origin, marital status, citizenship, disability, and veteran status.

PRIMARY RESPONSIBILITIES
The staff attorney will be responsible for investigating, filing, and litigating civil liberties and
civil rights cases in both federal and state courts. This includes legal research, investigative
work, identifying and signing up named plaintiffs, complaint drafting, discovery and motion
practice, and handling trials and appeals.

The staff attorney will be responsible for maintaining an active docket of their own cases,
typically with assistance from outside cooperating attorneys, as well as helping to supervise and mentor more junior attorneys in the department.

The staff attorney will also engage in advocacy short of litigation, coordinate with the various policy-focused attorneys and other staff in the office, provide legal analysis to advance other ACLU policy work, conduct community outreach as needed, and supervise law students and volunteer attorneys. Along with other professional staff members, the staff attorney will represent the ACLU publicly, speaking to the media and others, as assigned.

Travel, as well as some work on nights and weekends, will be necessary. Along with all
employees, the staff attorney is expected to help maintain a positive, respectful, welcoming, and professional work environment for employees and volunteers.

QUALIFICATIONS
At least four years of significant litigation experience, with some demonstrated ability to develop and litigate class actions and/or civil rights cases. Applicants with far more than five years of experience are strongly encouraged to apply. Plaintiffs’ side work and/or previous experience in constitutional law litigation is a plus, as is experience supervising other attorneys.

Must also have superior writing, research and verbal skills in presenting both to lawyers and to the non-lawyer public; leadership and organizational skills in order to encourage volunteer lawyers and work cooperatively in coalitions on complicated cases; the ability to take initiative, think strategically, and share responsibility and credit.

Must have a commitment to race equity, and a personal approach that values the individual and respects differences of race, ethnicity, age, gender, sexual orientation, religion, ability and socio-economic circumstance.

Must be a member of the Washington State Bar (or willing to take the next bar examination).

This job description provides a general but not comprehensive list of the essential responsibilities and qualifications required. It does not represent a contract of employment. The ACLU reserves the right to change the description and/or posting at any time without advance notice. This position is “exempt” under the Fair Labor Standards Act.

COMPENSATION AND BENEFITS
Salary is based on experience, qualifications and the parameters of the ACLU compensation
scale. Benefits include three weeks of vacation to start, medical and disability insurance, a
retirement plan, and an ORCA card.

APPLICATION PROCEDURE
To apply, email a letter of application and resume to [email protected] and include in the subject line of the email: your last name and Staff Attorney. In your letter, please indicate where you learned of the posting. Applications will be accepted until the position is filled, at which time the job announcement will be removed from our website at www.acluwa.org/owa.

This job posting refers collectively to the two organizations under the name “ACLU of
Washington.”