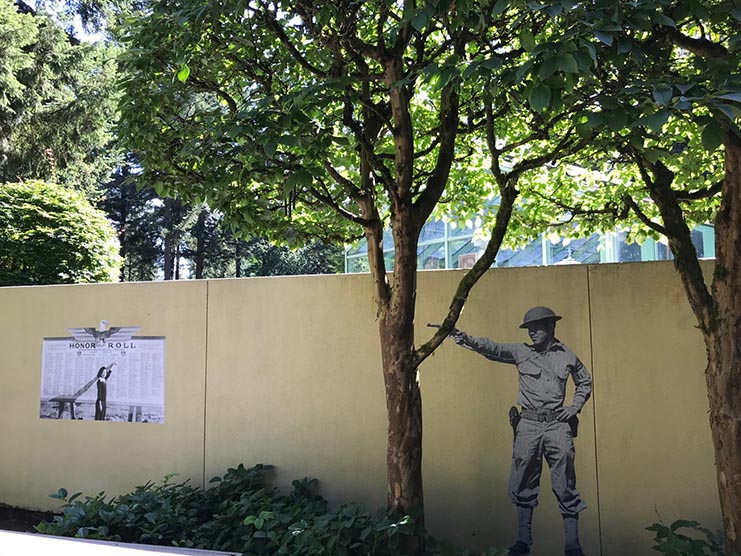 The Pacific Bonsai Museum in Federal Way is one of only two bonsai museums in the United States and maintains a collection of 150 bonsai. Now, the Museum is also hosting a special exhibition entitled World War Bonsai: Remembrance & Resilience, dedicated to tracing the cultural practice of bonsai in both Japan and the U.S.

This year, 2020, is the 75th anniversary of the end of World War II, and Pacific Bonsai Museum curator Aarin Packard believes this is an ideal time for this special exhibition.

Packard had been collecting materials for this potential exhibit since he began working as an assistant curator at the National Bonsai and Penjing Museum in Washington DC 15 years ago. “While I was in Washington DC, I was working with a lot of trees that had stories connected to World War II, and I just began amassing more information about what happened to the art form during that the war,” he said. “It’s a period that’s not really well documented, so I would store away any little fact or name, or any sort of information that I came across in my various research projects.”

Packard’s passion for bonsai grew slowly during his youth. “My dad had a small bonsai collection in our backyard and I grew up seeing them but not really having much interest in them,” he recalled. “I did develop an appreciation for Japanese culture through martial arts and studying Asian philosophy, but it wasn’t until two friends received bonsai as Christmas gifts that I became interested in learning more about them.”

Once Packard turned his bonsai hobby into a career, he delved into the work of a curator. “In regard to exhibitions, I see the role of a curator as an interpreter,” Packard said. “They bridge the gap between the audience and the information. They find ways of presenting information in a way that engages the audience to consider looking at something with a new perspective.”

While considering the audience for World War Bonsai, Packard decided to invite public artist Erin Shigaki, whose art has focused on the incarceration of the Japanese American community during World War II, to create a portion of the exhibit. “It was important to have representatives of the Japanese American community involved in this project from the beginning,” Packard said. “I became aware of Erin’s work earlier in the year and thought she might be a great person to reach out to.”

In return, Shigaki was pleased to be included. “Folks at the Museum also had heard about the white-washing of my art at Bellevue College earlier this year,” she said, “and I appreciated their sensitivity to and awareness of that incident.”

Packard met with Shigaki and shared his curatorial vision. “I wanted to have a space at the end of the exhibit which could be some sort of memorial for reflection and contemplation but also for the community to add something to the exhibit,” he said. “She was doing something similar in taking historic photos of the incarceration and presenting them in a new context.”

Shigaki quickly signed on to the partnership. “I had an excellent initial meeting with Aarin during which we discussed the exhibit arc and looked through some of the artifacts that he planned to show or draw from,” she said. “We quickly discovered that we’re both passionate about the history surrounding the Japanese American incarceration and the stories that emerge from that oppressive chapter in American history.”

Packard found Shigaki’s thoughts inspiring. “Our conversations were around this idea of creating a space for the community to reflect but also to tie the theme of racism experience by Japanese Americans during WWII to current events and help bring the past into the present,” Packard said. “She is an amazing artist and advocate.”

In addition to curation, Packard’s job description also includes exhibit design. “I’m not only trying to present the information and objects in new and engaging ways, but I am also dealing with the challenge of creating an exhibit in an outdoor space,” he said.  “I think our museum is set up for that, but it is tricky to think of ways to engage visitors in new ways while still ensuring the collections are being well-cared for.”

For Shigaki, who primarily creates public art for urban areas, the rural museum setting was new. “This is the first time I’ve been invited to install in an environment so powerfully a part of the natural world,” she said. “It was a pleasure to work among the smells and shadows of old-growth conifers and amidst the spirit of the bonsai trees.”

It is precisely that spirit that forms the narrative of this exhibit. “We are sharing the stories of our trees and the individuals who originally created them,” Packard said. “The trees determine everything I do.”

Packard cites two particular trees with interesting back-stories, the first of which is a Japanese black pine. “That was started from seed by a Japanese American who was incarcerated and then took the seedling with him upon his release,” he said, “and it eventually grew into one of the bonsai in our collection.”

World War II incarceration is also key to the second story that Packard highlights. “The other tree that’s also extremely important is a very big trident maple which was essentially abandoned during the war as the family who cared for it were incarcerated,” Packard said. “The tree was able to get roots through the wooden container it was growing in, in order to survive the war years.”

Shigaki explicitly brings incarceration into the forest exhibit and interweaves the two in her visual art. “Some of the images are pulled directly from the World War Bonsai exhibit, enlarged, and, in the case of the little Hirahara boy in a sailor suit, removed from the background of the original photograph,” she described. “I think this image is powerful for its purely innocent depiction of a boy spending part of his childhood in an American concentration camp. His parents, too, by staging this portrait session in their barrack-home, hold tight to the promises of America despite their unconstitutional forced removal and imprisonment.”

Despite this history, numerous Japanese bonsai artists ultimately shared their work because they saw the value of bonsai in bridging cultural divides and reconciling former enemies. “One story of someone who was reticent to teach was Kelly Nishitani, the earliest bonsai teacher in Seattle,” Packard reported. “He was approached by a woman, Connie Rafael, to teach her and he refused. He eventually agreed to teach her, and they went on to become lifelong friends, establishing the earliest interracial bonsai study group in Seattle, which became the Puget Sound Bonsai Association.”

It is this kind of humanity that the Pacific Bonsai Museum intends to highlight. “The primary part of the exhibit wonderfully tells the stories behind particular aspects of bonsai culture and practitioners during WWII,” Shigaki said. “The final part that I developed asks visitors to slow down, absorb everything they’ve seen, and take in the faces of but a few of the 120,000 incarcerees. It also asks a final question.”

That question is, “What kind of ancestors do we want to be?” Shigaki drew the question from an essay by Nina Wallace about the ongoing anti-Blackness in the United States, which she sees expressed in Asian American communities, as well.

Shigaki considers answering this question to be every American’s responsibility, including her own. “I answer the question by using my moral authority in the fight for equity and the removal of oppressive systems,” she said. “And I answer by creating art that hopefully helps all of us connect the Japanese American incarceration story to the struggles our Black, Brown, and Indigenous siblings continue to face today amidst a global pandemic, within the prison-industrial complex, and simply out in the world within our broken system.”