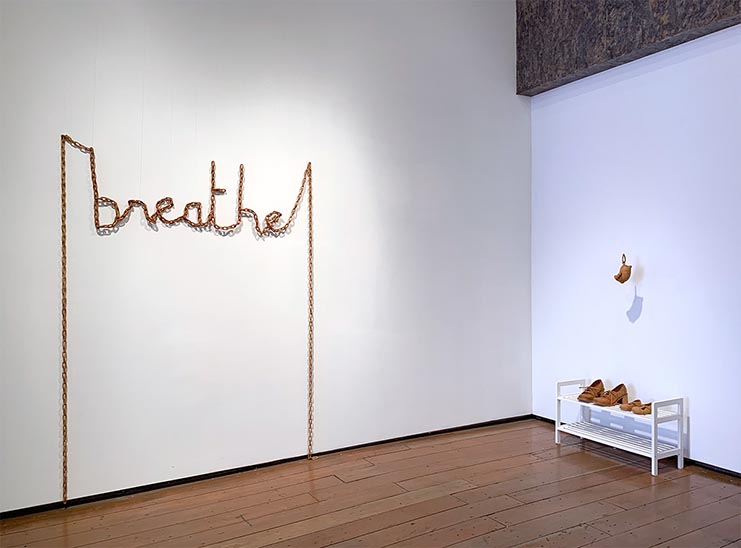 Two current shows in Seattle’s Pioneer Square neighborhood examine the influence of external forces like ancestral history and inherited belief systems in shaping the female experience from the inside out. Lakshmi Muirhead’s There Is Always A Before and Humaira Abid’s Sacred Games both take an unflinching look at how family, culture, and socialization inform a woman’s place and perceived value in society, as well as the development of her identity. Lakshmi’s intimate process of self-inquiry is on full view in a confident series of large scale works, while Humaira’s intricate paintings and sculptures narrate the painful stories of those who are forbidden to tell them first hand.

Upon entering J Rinehart gallery, one is immediately met by several towering works in leaden hues. Densely layered in paint and plaster, they recall to mind the Tablets of Testimony or other ancient stones. Fragments of writing— partially obscured— seem to recount bits of history in a familiar yet  unrecognizable language.

For artist Lakshmi Muirhead, the evolution of layers is as much about their function as what lies beneath them. In her new solo show There Is Always A Before, the artist connects the layers of her personal life and family history to her process of continually building up and digging into the canvas. With thick strokes of plaster, oil, acrylic, and graphite, she labors over the strata of each piece— occasionally scratching down to uncover a glimpse of what came before. Every mark on the canvas is a site of excavation and discovery, as she works to simultaneously evolve and interrogate its history. At first glance, each piece appears deceptively simple, owing in part to Lakshmi’s  self-imposed material restrictions.  A closer look reveals incredible depth and texture. Probing her personal experiences with maternity, erasure, lineage and the function of language, Lakshmi takes the viewer inward. To experience her work is to take part in her practice— by digging into each piece, layer by layer.

Across the streets at Greg Kucera Gallery, Humaira Abid’s astonishingly detailed woodwork and miniature paintings offer a jarring examination of how religion is often twisted to shield the powerful from scrutiny and consequence while subjugating the most vulnerable members of society.  Sacred Games is a collection of works that bring to light the stories of women and girls who’s lives and experiences are fundamentally taboo. Themes of sexuality, puberty and fertility converge with violence, unrest and displacement. This underscores a contradiction between the promise of spiritual protection and a lack of regard for women’s physical health and safety.

Humaira renders everyday objects in pine and mahogany with masterful precision. Lifelike reproductions of cardboard protest signs, women’s purses, neatly folded clothing in suitcases and handguns arranged in the form of a swastika all work together to convey the tension between fear and control, submission and dominance, shame and innocence. Working primarily in wood— a medium traditionally dominated by men—adds another dimension of strength and defiance to each piece. Execution and concept are perfectly in balance, emphasizing her creative and technical ability while sending a clear message about the prescribed role of a woman in contemporary society.

Lakshmi and Humaira seem to work from different vantages toward the same end: exploring the wounds we sustain and inherit, while uncovering the strength to talk about them in meaningful and productive ways.