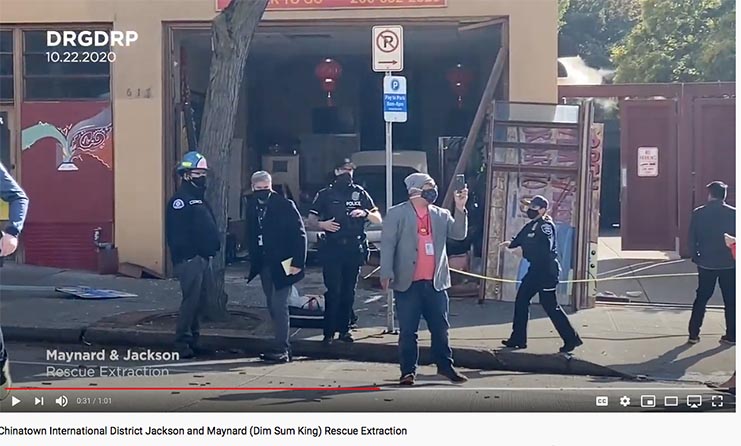 Seven people were injured after a vehicle backed into the entrance of Dim Sum King in the Chinatown International District just before 2 PM on Thursday, Oct. 22.

According to the Seattle Police Department’s blog: “It appears that the driver of the Toyota Camry was attempting to park the car on South Jackson Street when the Camry went over the sidewalk and into the front of the business.”

Fire Department crews found that the vehicle did not cause significant structural damage to the building, according to the Department in a tweet.

Staff from the Seattle Chinatown International District Preservation and Development Authority (SCIDpda), which owns the Bush Hotel building Dim Sum King is housed in, helped the restaurant staff remove rubbish and board up the storefront, said Jamie Lee, director of community initiatives at SCIDpda, in an email.

SCIDpda will consult its insurance companies to assess damage. According to Lee, the kitchen at Dim Sum King seemed untouched. SCIDpda will work with the owner to help file insurance, and possibly re-open in the future.