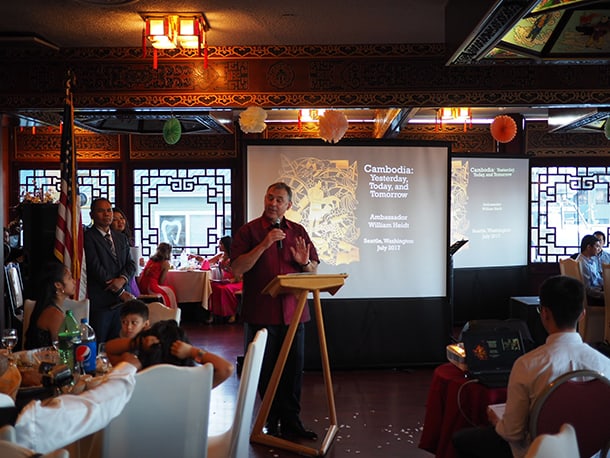 The tour began with a visit to Wat Dhammacakkaram, the oldest Cambodian Buddhist temple in Washington State, located in Seattle’s Beacon Hill neighborhood. There Ambassador Heidt, donning traditional Khmer garb, was received by Abbot Soveth Muy. After some handshakes and photo ops with temple patrons, Abbot Muy conducted a blessing ceremony welcoming the Ambassador. Ambassador Heidt and his wife Sotie reciprocated the hospitality by making a personal donation of $500 to the temple.

The visit was the third of its kind for the Ambassador in an effort to engage with the Cambodian diaspora in the United States. Pakun Sin, Chair of CACCWA was ecstatic. “The Ambassador and his wife Sotie were very insightful of the local community here,” Sin said.

For the first time in history, the wife of the U.S. Ambassador to Cambodia is of Khmer descent. With roots in the Pacific Northwest, Sotie Heidt, arrived in the United States in the 1980’s with the wave of refugees fleeing the Cambodian Genocide and settled in the Seattle area. She went on to attend Evergreen State College and then graduate with a master’s degree from Cornell University.

In 1997, she made the trip back to Cambodia. While working at the US Embassy, she met Ambassador Heidt, who was an Economic Officer at the time. In 1999, they married in Seattle, having both a church service and a traditional Khmer ceremony.

Later in the evening, events shifted to Lake Union where a dinner reception was held at China Harbor restaurant in the Ambassador’s honor. The CACCWA began the event with a presentation designed to give Ambassador Heidt and family an introduction to the organization and the various community groups working under its umbrella, in addition to data and statistical information to help paint a picture of the Cambodian American community of Washington State.

Also attending the dinner reception were former Washington State Representative Velma Veloria, State Senator and candidate for Seattle Mayor Bob Hasegawa, Seattle City Councilmember Lorena González (who is up for re-election for the citywide Position 9 seat), and Seattle city council candidate Teresa Mosqueda, who is seeking Position 8 seat vacated by Tim Burgess. “I was impressed with how committed his family was in representing their roots here in Seattle. It was a nice fusion of both cultures,” Mosqueda said.

After the dinner, Ambassador Heidt gave a presentation of his own where he spoke on the progress that Cambodia has made, highlighting the collaborative work the two countries have had. In his presentation, the Ambassador touched on Cambodia’s economy, the recent communal elections, and how he believes Cambodian Americans can help.

Noting that Cambodia has a young population, with 75 percent of the population under 30 years of age, and with over 300,000 people entering the labor market each year, the Ambassador envisioned huge growth opportunities where the economy could diversify away from the traditional garment and agriculture industry, with the onset of a growing tech sector. He also cautioned that this young population still faces a huge vocational and skills gap, “The youth is our greatest asset and also our greatest challenge. The current educational system doesn’t quite meet those needs.”

Following the Ambassador’s presentation, the floor opened up for questions. They ranged from the Ambassador’s thoughts on a $500 million outstanding debt the U.S. claims against Cambodia, visa processes, to how people can directly help Cambodia.

Ambassador Heidt encouraged direct engagement to the community by pointing out that the Cambodian economy has been growing at 7% GDP per year with a growing middle class and that “there’s a great opportunity to service this middle class, there’s a lot of business to be done.”

Social activist Sina Sam asked the ambassador about issues facing Cambodian Americans in the United States, specifically on the issue of deportation and how the community here can work with the State Department. “Policy is set in Washington, the president has made a high priority of deporting aggravated felons,” said Ambassador Heidt, referring to the AEDPA and IIRIRA, legislation passed in 1996.

Aggravated felonies as defined by the 1996 law includes misdemeanors such as theft and trespassing as deportable offenses affecting people who are non-citizens.

“His response was very appreciated in that he wants to reach out and meet more to make them [exiled and deported Cambodian Americans] feel welcome and supported in Cambodia. But that doesn’t address how to prevent future deportation or help families reunite,” said Sam later when asked about the Ambassador’s response.

The event ended with dancing and a live band playing classic Khmer rock and a special performance by the Ambassador and wife Sotie as they took to the mic to serenade the crowd with Khmer songs.

When asked about how the dinner went, Sin was very happy about how the event turned out and hoped that this would lead to more mobilization of the community and engagement with political figures. “The Ambassador’s presentation really opened my eyes, it really shows a different light of Cambodia, it was a very optimistic view of things.”