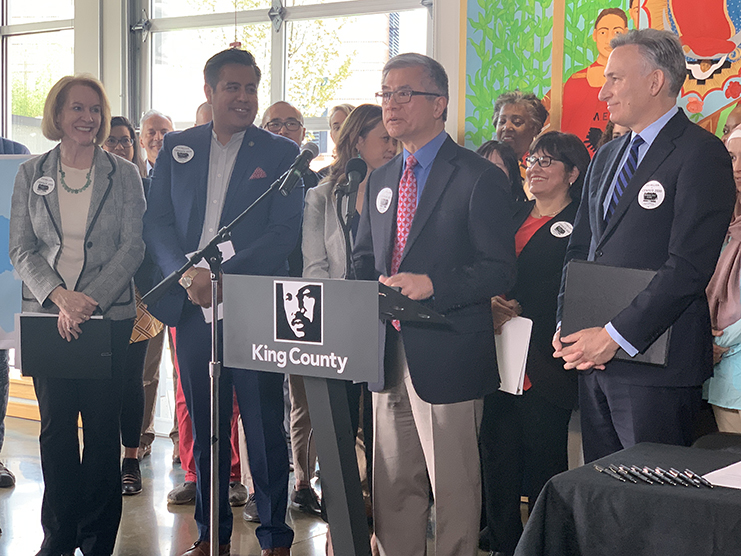 Every 10 years, the federal government is legally required to count every person living in the country, regardless of citizenship status, as part of the U.S. Census. Certain populations, however, are more likely than others to be missed. This includes Asian Americans and Pacific Islanders, people with limited English proficiency, people with low incomes, and young children.

AAPIs have been undercounted for decades, putting our families, communities and neighborhoods at a disadvantage, with impacts to AAPI communities’ access to needed healthcare and quality education. Census data is used to determine funding for basic and vital programs for food assistance, Medicaid, Medicare and the Children’s Health Insurance Program. It is used to determine federal funding for educational programs, including support for low-income students, bilingual language programs, and school lunches.

Undercounting also impacts our democracy and ability to have a full voice in policy and decision-making, including federal funding allocations. Census data is used to determine where limited English speaking voters can access translated ballots, a right guaranteed by the Voting Rights Act. (State Fact Sheets. https://www.advancingjustice-aajc.org/census).

In January 2019, a U.S. Census Bureau study reported alarming findings on the perceptions and barriers related to the 2020 Census, most prominently, that Asian Americans were least likely of any racial group to report that they intended to complete the form. Widespread community concerns are that without substantial investments in census outreach specific to AAPIs, we will see a massive undercount of our communities (Ramakrishnan, K, & Wong, J. 2019, January 29.www.aapidata.com/blog).

The ACRS Civic Engagement team began work on the census in 2018, joining other organizations in a multi-racial coalition that would become the statewide Washington Census Alliance. Much of the coalition work is currently engaged in ensuring there is adequate funding from both private and public sources, including the state government, to ensure that communities of color are counted. On top of the historical barriers to census participation, communities will need even more resources for outreach and education to overcome recent changes to the census that further threaten a complete and accurate count for AAPIs. These new challenges pose serious barriers to community participation, including the move to online collection and the prospect of a citizenship question.

As many of our community members have heard, the Department of Justice requested that the Census Bureau include a citizenship question on the 2020 Decennial Census, and advocates across the nation have pointed out how this could lead to a massive undercount. In response, lawsuits have been filed in multiple states against Secretary of Commerce Wilbur Ross and the Department of Commerce. No matter the outcome, the concern about the citizenship question is widespread and in many ways, the damage has been done.

Lastly, as of this writing, we are still awaiting more implementation details from the Census Bureau, particularly regarding the online system. Unfortunately, with a census launch date of April 1, 2020, there is no time to spare. ACRS is working with local and national partners to develop and launch tools for community outreach and education so that our communities can be well informed about the census and their choice to participate.

In addition to census planning, the year presents exciting challenges for the Civic Engagement Program. Much of the work is building on legislative policy changes, growing coalition work, and momentum on voter engagement with goals of seeing increased turnout by AAPIs in Washington state.

• Non-partisan Get Out the Vote (GOTV) alongside statewide AAPI partners work on key municipal and county elections across the state, including several city council positions in Seattle (7), Tacoma (2), Everett (4), Yakima (4), Spokane (4 plus Mayor), and Olympia (2).

• Work with local and national partners on building capacity for year-round community and voter engagement, including access to leadership and community training, issues education, listening sessions, and effective communication to ensure communities are informed on the issues important to our communities.

There’s much to do, and we can’t do it all without your help. Every person’s effort counts. Outreach or organize non-partisan GOTV ballot parties and phone banks, share critical information about the upcoming census, or help us translate information and fact sheets so more of our community members are informed.

Jocelyn Lui is the Projects Director for ACRS.