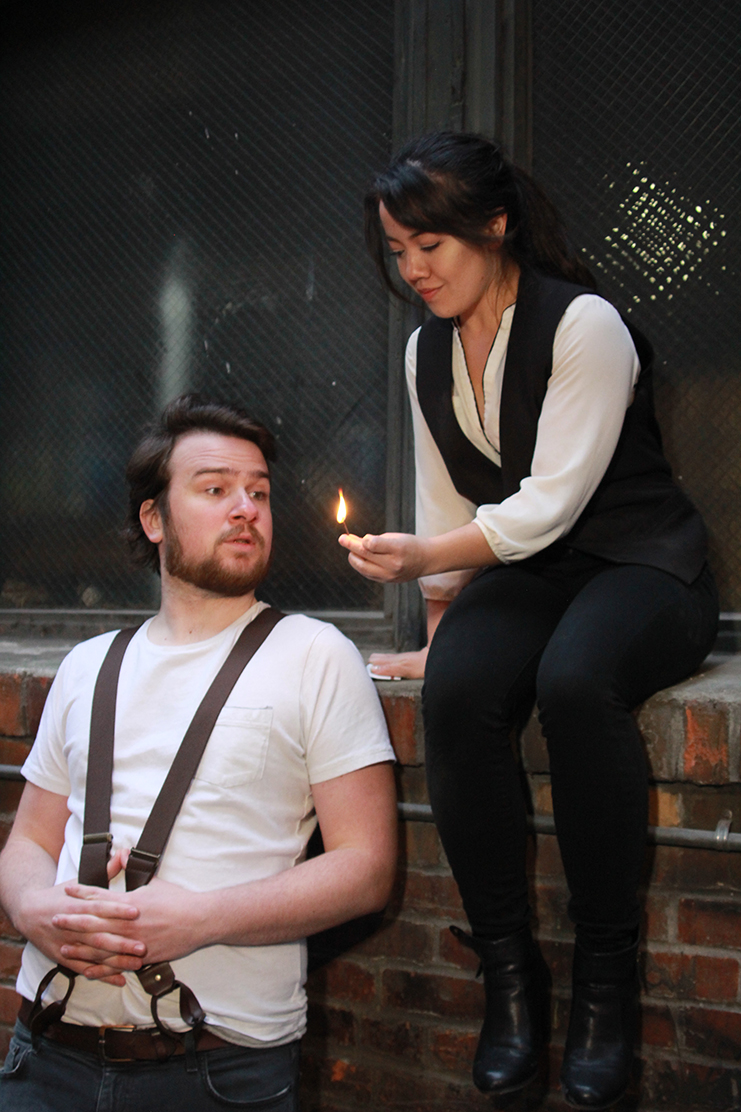 Local actor and marketing specialist Amber Tanaka is working on some new projects. A year ago, she began working with local theatre ensemble The Horse in Motion, and will soon perform in their upcoming show, The Arsonists by German playwright Max Frisch.

So far, Tanaka has found The Horse in Motion to be a good fit. “Immediately I loved the welcoming collaborative energy of the group,” she said. “The company’s mission statement ’To engage our audience in new experiences that expand the traditional conception of theatre and reshape the way we interact with art, our community and the world’ is nearly perfectly in step with my personal goals as an artist.”

Because of this, Tanaka took on the ensemble’s role of director of marketing and communications. “Part of what makes The Horse In Motion so special is our collaborative nature,” she said. “We all work very collaboratively to make artistic and administrative decisions.”

The artistic decisions include choosing which plays to present, and whether to utilize non-traditional casting. “I’m playing Eisenring in The Arsonists,” Tanaka said. “My character is originally written as male, but I’m playing them as female.”

This will definitely influence how The Horse in Motion addresses the central questions in The Arsonists: How do takeovers happen? How do normal citizens become drawn in to support movements such as fascism, communism, or any other large societal movement that requires the cooperation and compliance of masses of ordinary people? “So much of the play is about status and power dynamics,” she said.

The gender switch in her character poses interesting challenges for Tanaka as an actor. “I believe, as society exists today, there is a large difference in how someone who identifies as male attempts to take power versus how a fem-identifying person does,” she said. “The hardest part for me so far has been taking dialogue written for a high-status man and shifting it to fit a high-status woman.”

Tanaka takes this in stride as part of her lifelong experience in theatre. “My mother is an actress so I was exposed to it from a very young age,” she said. “I still remember running to her dressing room after a show under the pretext of congratulating her, but really I just wanted to be backstage. There’s a certain electricity.”

She has trained at a number of institutions including Denver School of the Arts, Cornish College of the Arts locally to earn a BFA in Theatre and Original Works, and the Royal Academy of Dramatic Arts to focus on Shakespearean text for a semester.

One of her most memorable learning moments came in a clowning class taught by David Taft. “We were asked to stand in front of the class one by one, with a large old tire,” she said. “The only rule is that we could not speak. The task was simple: be funny.”

Initially, Tanaka found that the usual tricks did not produce the expected response of laughter. “Finally, exhausted, I sat and looked at the tire, now propped on its side,” she said. “Just then the tire tilted slightly, I leaned in to match it, and we met in the middle sharing what seemed to be an innocent kiss. David and the class roared with laughter and applause.”

She learned a larger lesson that has proven to be invaluable. “No matter how much work or planning I do before getting onstage,” she said, “if I’m not present and connected to what’s happening in the moment, with the people or objects playing with me, the audience will not be as engaged.”

Despite these satisfactions, Tanaka finds that a life in the arts is not easy. “We live in a society that radically undervalues art, and there is little to no funding for it,” she said. “This means most artists can’t make a living wage doing just their art, so we take other odd jobs.”

This leads to a double schedule of jobs plus rehearsal and performance. “It’s easy to get exhausted, to burn out, to want to breathe,” she said. “But I truly believe the people who are successful in the arts are the ones who simply refuse to give up, who manage to push through, to stay hungry.”

A future goal that Tanaka yearns for is to reprise the role of Hamlet, which she once performed as a child. “I believe I was only about 10, and I am not delusional enough to believe it an outstanding performance,” she said. “But it was the first time I remember having to grapple with the emotional and psychological internal life of a character.”

The magic is that the work is also the fun of it. “You have to really really want it, and constantly push yourself into new opportunities,” she said. “I’m still hungering after another chance to play the Danish prince!”

The Arsonists runs from May 17 to June 3 at Gallery Erato, 309 First Avenue South, Seattle.