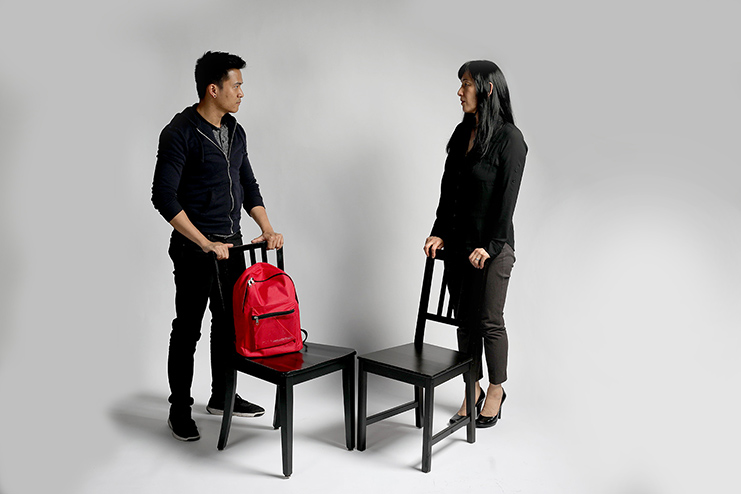 Local audiences have an opportunity to see the work of award-winning playwright Julia Cho. This month, ArtsWest is producing her play Office Hour, about the threat of violence on a university campus, which Cho wrote in response to the 2007 gun killings at Virginia Tech University.

Playing the two main roles are Naho Shioya, who plays Gina, the creative writing instructor who faces the menacing persona of Dennis, her taciturn student, played by Christian Quinto. For both Shioya and Quinto, Office Hour is their first experience with Cho’s work.

Shioya found her interest piqued very quickly. “I was curious, and when I started to read the script, I got sucked into the story, and it really wasn’t what I expected,” she said. “I don’t even know what I expected, but I felt a very strong connection and understanding of the story, and what the characters go through and that made me really want to tell her story.”

Likewise, Quinto felt compelled to audition for the production. “On the audition invite email, they suggested that we should read the play before signing up for an audition slot because of the subject matter,” he said. “Right then and there, I was scared but very intrigued.”

As immigrants, both actors feel some commonalities with the characters they portray. “The most interesting thing about Dennis is how similar we are,” Quinto said. “Throughout the rehearsal process, I found bits and pieces of Dennis’ character in my personal life.”

In addition to the immigrant experience, he found the similarities to be numerous. “We use art as a way to express ourselves (mine is performing and his is writing),” he said, “we love chocolate, we’re both introverted, and we share a similar Asian experience in our day-to-day life.”

Shioya found additional parallels in the subject matter of the play. “I certainly feel that some of the things addressed in this play are very personal to me, as I am an immigrant, a woman of color, and an educator,” she said. “They turned out to be something more than just gun violence: immigrants experience in U.S., assimilation, education institutions as a system and how they are set up to alienate some students, ‘othering.’”

Because this play delves relentlessly into issues of violence, the rehearsal process has been taxing. “It’s been very important for all of us to feel safe and comfortable with each other,” Shioya said. “I feel that we collectively came together to create a safe and trusting environment to be able to have very open, honest, and sometimes very difficult conversations, about gun culture, immigration topics, institutional racism, assimilation, white supremacy, bias – topics that could get very contentious, we navigated as a team with care.”

Quinto has also found that self-care has been an important part of this process. “What’s most important is to have time for yourself and not think and worry about anything else,” he said. “That day of recharge and rest will benefit you in the long run.”

Despite the tensions onstage, Quinto feels that the play builds bridges rather than creating alienation. “The most important thing that I’ve learned as a result of participating in this show is that the Asian experience is so unique and specific, but it can also be universal,” he said. “On the surface, Office Hour could be seen as a show about gun violence, but once you experience this roller-coaster ride of a show, you’ll find yourself in these characters’ shoes.”

Quinto emphasizes the relevance of the play’s themes, such as white privilege, white fragility and Westerners’ view on Asian experience and the Asian male. “As we’re seeing more Asian representation on stage and screen, we start to realize that Asian stories are important, relevant and revolutionary,” he said. “As an Asian immigrant, I’m honored to be playing an Asian immigrant on stage.”

Similarly, Shioya sees this production as a way to build empathy. “There are so many beautiful poignant moments in this play,” she said. “I am hopeful that everyone who will come see this will find some connection to their own life in some way.”

Quinto believes it’s the human element of this production that will resonate with audiences: “At its core, Office Hour is a show about two human beings aching to connect.”