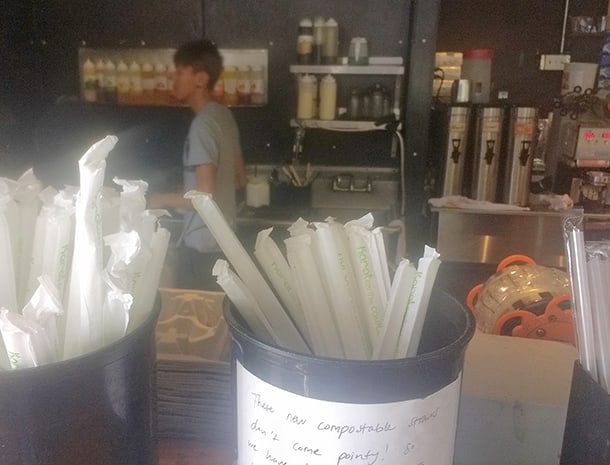 Imagining bubble tea without the thick neon straw is like imagining a pumpkin spice latte without the iconic Starbucks logo which is why Seattle’s plastic straw ban has had a big impact on bubble tea shops.

On July 1, the city of Seattle banned plastic utensils and straws from food establishments. The ordinance was originally passed eight years ago in 2010, but the ban on utensils and straws was delayed until alternatives came on the market. A ban on non-recyclable and/or non-compostable disposable food packaging has been in effect since 2010.

Food service establishments have a variety of options for complying with the ordinance such as paper straws, compostable plastic straws, or forgoing them all together. However, several oversights have been brought to light since the ban was put in place.

Bubble tea straws need to be much wider than normal straws to fit the tapioca balls that give the drink their name. That isn’t the problem though—it’s the fact that there are no straws compliant with the ordinance that have a diagonal cut at one end to pierce the plastic seal commonly attached to the top of bubble tea cups.

Becca Fong, the solid waste communications and community outreach planner for Seattle Public Utilities, explained that while the ban went into effect on July 1, they are working closely with businesses to support them in making the transition. One of the ways they are doing this is with a program focused on outreach to ethnic businesses through the Environmental Coalition of South Seattle (ECOSS).

I-Miun Liu, owner of the local bubble tea chain Oasis—which has stores in the Chinatown International District, Capitol Hill, the U District, Bellevue and Renton —decided to find a solution on his own. Liu found a manufacturer in Taiwan and worked with them to create a compliant bubble tea straw with the necessary diagonal end.

While Liu has found a replacement that will work, he is bracing for the longer term impact of the ban. Liu supports getting rid of one use utensils, but the reality he faces as a business owner makes it difficult for him to fully get behind the ban.

The price of the new straws are two to three times more expensive than the plastic ones, according to Liu. That extra cost may have to be passed on to the customer.

Liu also lamented that not everyone will comply with the new ordinance unless it’s enforced. He hopes that the city follows through with its enforcement to make the playing field level. If shops can get away with using the cheaper, plastic straws then that means they don’t have to raise their prices.

According to Fong, Seattle Public Utilities is currently in contact with manufacturers to discuss creating straws that bubble tea shops can use. Until then, that puts bubble tea shops in a difficult position. How to transition to a compliant alternative without sacrificing an integral part to bubble tea—the straw?

Why is it so important that bubble tea has that plastic seal on top anyway?

For one, it’s convenient. You can shake up the drink and not worry about spills. But even more so, the plastic sealed top and thick straws have become symbolic.

Liu said they tried using regular tops for bubble tea at their Capitol Hill location but people didn’t like them. It’s a tradition that has been cemented into the bubble tea experience.

Lonely Whale, the organization that led the Strawless in Seattle campaign, says on its website that 500 million plastic straws are used every day in the U.S. It also gives the statistic that 71 percent of seabirds and 30 percent of turtles have been found with plastic in their stomachs.

In the case of bubble tea shops, it will take some time for better alternatives to enter the market. But Fong says the city is working to make sure that they do become available for bubble tea shops, and until then the City is dedicated to helping shops comply.

One of the eco-friendly manufacturers is Karat Cup. Kendra Cerbasi, the marketing coordinator for the company, said in an email that they started offering bubble tea straw alternatives starting in April, but they too lacked the diagonal cut. However, Cerbasi says that they are working on developing a bubble tea straw with that feature.

It’s still too early to tell how exactly the ban will impact bubble tea shops. While Liu has found a manufacturer, he’s afraid he’s probably going to have raise price. Dan C. of Kung Fu Tea wants to comply but doesn’t want to sacrifice the quality of his product.

One option that Chatea in the U-District has come up with is simply puncturing the plastic seal with a barista tool.

Fong stressed that the ban shouldn’t feel like a burden on bubble tea shops. The city has an outreach program specifically for ethnic businesses that can provide information for anyone who wants to know more about the ban or needs help making the transition.

Until then, it’s a waiting game for when demand becomes great that manufacturers deliver the supply.