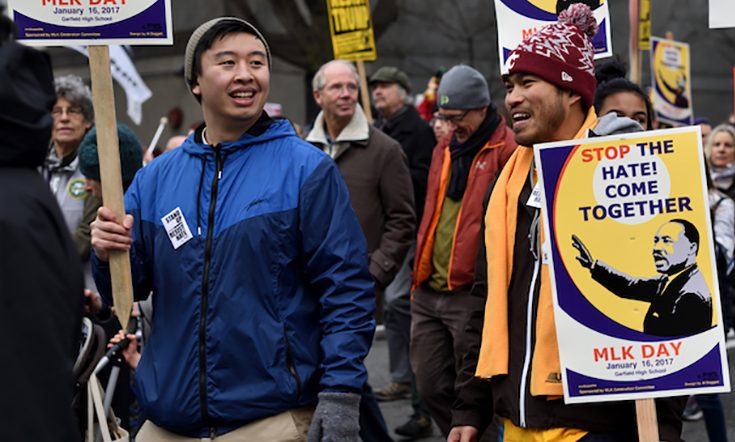 “Nonviolence means avoiding not only external physical violence but also internal violence of spirit. You not only refuse to shoot a man, but you refuse to hate him.”
~The Rev. Dr. Martin Luther King, Jr.

These days, remembering the life and work of the Rev. Dr. Martin Luther King, Jr. is more relevant than ever. He was an ardent opponent of racism, militarism, and materialism. He no doubt would be deeply troubled by the increasing acceptability of authoritarian rhetoric in American society, and saddened by the tendency to categorize large groups as “the other”, which makes it difficult to see people different from ourselves as worthy of compassion.

In schools, we tend to talk about how radical Dr. King’s message was, cover the historical context in which he lived, and discuss what he accomplished for American society. Activists bring up that the most radical and socialist elements of Dr. King’s message are left out of our education. Near the end of his life, Dr. King fought for a working-class movement to end inequality of access to good jobs, educational opportunities, and resources. He advocated for a different distribution of wealth in America, and wasn’t convinced that capitalism could provide this.

If there is one thing that has become painfully obvious and impossible for anyone to ignore in recent years, it’s that the work of Dr. King’s movement is far from over. Racism still pervades American systems. It is written into our laws and is clearly visible in how the law is executed. It disproportionately kills brown and Black Americans, robbing people of justice and blaming them for their own suffering.

Every year in January, we reflect on Dr. King’s legacy, but we rarely do so in enough depth to see his reasoning. In particular, the religious aspect of his messaging is usually downplayed or cut out in school lessons, perhaps in a noble effort to maintain separation of church and state. I don’t consider myself religious, but it’s important to understand that Dr. King’s faith was fundamental to his identity, and it heavily influenced his ideology and approach to activism.

The Rev. Dr. Martin Luther King, Jr. was born into a family of Baptist preachers, and he considered the fight for social justice and human dignity as central to his ministry. He was deeply inspired by his Christian faith, and by the example of forgiveness set by Jesus in the face of horrible oppression. In Dr. King’s famous sermon Love in Action, he emphasizes Jesus’ unending willingness to forgive. He argues that we must live our lives so that “[f]orgiveness is not an occasional act; it is a permanent attitude.” In his sermon Loving Your Enemies, Dr. King breaks down Jesus’ command to love one’s enemies, noting that while this command is one of the hardest things to practice, it is possible through a combination of forgiveness and recognition that people are more complex internally than the actions they commit externally. Of forgiveness, he clarifies for those who might argue against forgiving unjust acts:

“Forgiveness does not mean ignoring what has been done or putting a false label on an evil act. It means, rather, that the evil act no longer remains as a barrier to the relationship. Forgiveness is a catalyst creating the atmosphere necessary for a fresh start and a new beginning.”

The Rev. Dr. King saw the power in Jesus’ ideology, and the power in the civil disobedience of figures like Mahatma Gandhi and Henry David Thoreau. He saw that leading with dedication to nonviolence can change people’s hearts and minds on the deepest level, in a way that violence can never accomplish. While violence generates walls that prevent the building of relationships, nonviolence creates bridges that allow those on the “other” side to cross over.

It may be true that nonviolence isn’t able to change everyone; counterarguments to a nonviolent approach are quick to identify the people who refuse to change, and point out that using nonviolence is much slower in achieving goals than using violence. But the Rev. Dr. King saw that from a long-term strategic standpoint, nonviolence was far more effective than violence at propelling society toward greater compassion and justice.

(Concerning current events, I would add that sustained, open dialogue and trying to understand one’s enemies are critical tools for the long-term success of nonviolent movements.)

One of the reasons Dr. King espoused nonviolent resistance is because he observed a positive feedback loop at play when it comes to hatred, violence, and retribution. He noted that these types of responses naturally generate more of the same. In Loving Your Enemies, he states:

“Returning hate for hate multiplies hate, adding deeper darkness to a night already devoid of stars. … Have we not come to such an impasse in the modern world that we must love our enemies – or else? The chain reaction of evil – hate begetting hate, wars producing more wars – must be broken, or we shall be plunged into the dark abyss of annihilation.”

At his core, the Rev. Dr. King was a pacifist not just because he strongly believed it was right, but because he could see that it was the only course of action which would lead to the kind of society where, ultimately, brown and Black people (as well as others) could have lasting justice without the constant threat of retribution.

While it’s completely natural to want revenge when another person harms oneself or one’s family, Dr. King argued that if we’re to have any hope for a better society, we need to start behaving against our initial instincts. Even today, this is still a radical notion.

In Loving Your Enemies, the Rev. Dr. King explains that the path of loving one’s enemy isn’t easy, but it starts with forgiveness. Forgiveness, he says, “must always be initiated by the person who has been wronged, the victim of some great hurt, the recipient of some tortuous injustice….” The end goal is not to build a separate society, or a society where those in power and those oppressed simply switch places; the goal is to build what the Rev. Dr. King called “the beloved community.” And the path to such a society is through nonviolent direct action, in which those who are oppressed are able to fight against oppression, while still loving the oppressors and recognizing their humanity.

In our advocacy efforts, it is easy to say we are working purely out of love; it is extremely challenging to actually do it. I know I’m certainly not very good at it — I struggle with compassion for my “enemies” (and to be honest, even for my friends) on a daily basis. I spent many years feeling resentful at white people, then another couple years feeling resentful at the social justice establishment for approaching social change like a war, as a zero-sum game. But I’ve heard it said that harboring resentment is like drinking poison and expecting some other person to die. It isn’t healthy on a personal level (I know this from my own experience) and it’s also a doomed starting point for trying to create lasting social change.

In my own interpretation, I think the Rev. Dr. King would have agreed with this statement: It is important to prioritize both the external struggle for social justice and the internal struggle for personal growth. Neither is less important than the other, and neither can be truly reached in isolation. For some of us (myself included), we need to do more in the struggle for social justice. For others (myself also included), we need to put more energy into developing our capacity for compassion, especially for our enemies.

This year on MLK Day, I know we’ll hear speeches about the need for racial justice, breaking down the school-to-prison pipeline, providing healthcare and quality education for all, and righting wrongs perpetuated against our Native communities. I hope you will take these speeches to heart, and walk away with a resolved commitment to contribute more to the struggle for social justice. I hope you will also reflect on where you can further develop your compassion on a personal level, keeping in mind that hatred — expressed by anyone — is naturally met with retribution. I hope you will continue cultivating a spirit of nonviolence internally, and apply nonviolent direct action in the struggle for a more just society.