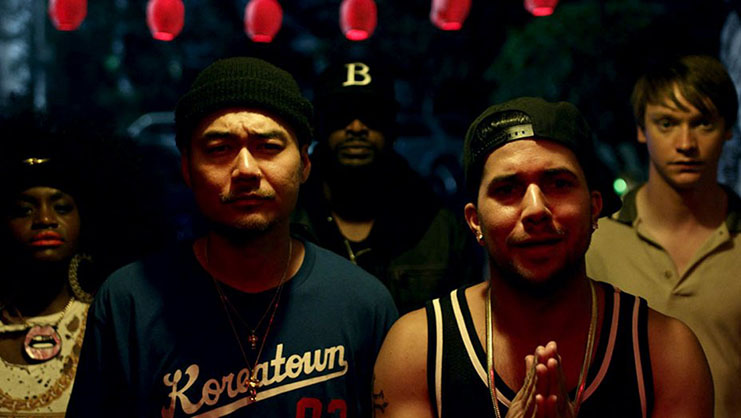 Disruptive, subversive, satirical, and surprisingly not preachy — Eminem-produced movie Bodied is all of the above and more. The premise — a naïve, white grad school student wants to write his thesis on the usage of the n-word in battle rap, actually ends up as a big player in the battle rap scene — prompts a larger discussion about cultural appropriation.

The main character, Adam Merkin (Calum Worthy), never thought he’d be a battle rapper, especially considering his short-lived career as a spoken poet. After attending a battle in attempt to speak to one of his idols Behn Gymm (Jackie Long), he gets challenged to a rap battle in the parking lot and kills it. Long story short, he gets involved in the battle rap scene as a rapper himself and slowly loses himself in this world.

Battle rap operates on a set of rules very different from our everyday lives. Anything goes. After Adam spews out some of the nastiest comments about Asian culture (none of which we would dream of rehashing here) to Asian American rapper Prospek (Dumbfoundead) in a battle, he even gets praised for his cultural knowledge — Prospek later tells Adam over a drink, “At least you know I was Korean, that’s culturally sensitive by battle rap standards.”

Despite this seemingly positive interaction (Prospek later mutters to Adam in Korean that he’s a racist piece of shit), the audience is not led to root for Adam. He’s a wholly unlikeable protagonist, but a great catalyst for a frank discussion on race.

Korean American director Joseph Kahn, well-known for pushing boundaries, takes it to new heights in this self-financed movie. While Bodied doesn’t offer any clear takeaways about race and cultural appropriation, it does encourage you to check yourself, through understanding your positionality in the world. Dare I say, it was a very un-preachy way to emphasize the concept of intersectionality to a wide audience — we all hold many identities (some that give us privilege, some that oppress us), and that’s it’s important to check ourselves and analyze the space we occupy.