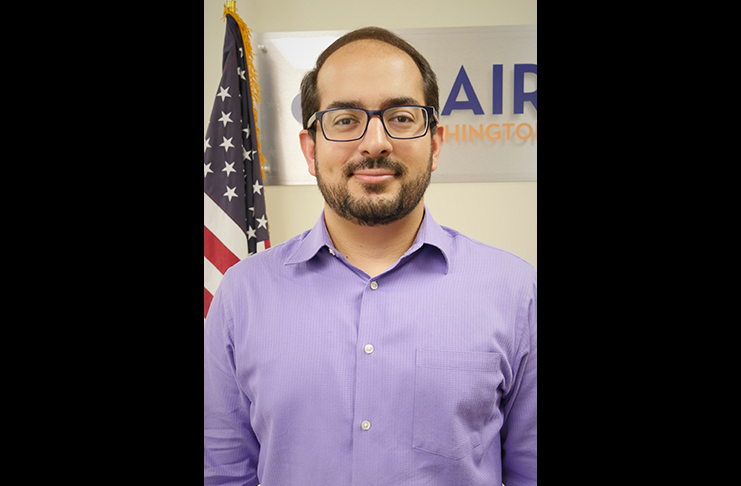 Since moving from southern California to the cool Pacific Northwest this summer Masih Fouladi, has come to know the local Muslim community from both an organizational and personal level. Fouladi is the new executive director of the Washington chapter of the Council on American Islamic Relations (CAIR-WA).

Warm and approachable by nature, Fouladi is used to moving around. “I was born in Iran, and my family moved over when I was under two years old, so I was fairly young when I moved to the United States,” he said. Fouladi’s family settled in Orange County and he grew up in Anaheim. He attended UC-Irvine for his undergraduate degree, studying Economics and Cognitive Psychology, and then went to Law School at UC-Davis.

For Fouladi, being a practicing Muslim, represents an intersection of faith, family and community. “I grew up going to an Islamic school up until the 6th grade, so faith has always been an important part of my life,” Fouladi said. “After 9/11, I wanted to know more about my identity, but I also remember hearing a lot from the executive director of CAIR at the time reminding American Muslims to be unapologetically Muslim, to resist the ‘second-class citizen’ label, and to stand up for other marginalized communities. This really influenced my frame of thought when I thought about what I want to do professionally.”

Fouladi had an interest in policy work from a young age, but he didn’t see it as a career path at first. For a while, he volunteered with CAIR-LA in his spare time, thinking he would become a doctor and do advocacy on the side.

“I also got involved in some of CAIR’s youth programs, and even went to Manzanar [concentration camp for Japanese Americans during WWII] on a trip with them,” Fouladi said.

This led to a legal internship with CAIR-LA during his undergrad, where he found his passion, and ultimately his career.

His decision to work at a nonprofit worried his immigrant parents at first, who were concerned he wouldn’t be able to support himself and a family. “I forget what Muslim comedian said this, but if you have Muslim parents you can only become three things: a doctor, an engineer, or a failure,” Fouladi said with a laugh. “Over the years, they’ve seen the great work that CAIR has done throughout the country…so when I started working seriously for CAIR they were pretty happy.”

Fouladhi emphasized that much of his engagement with CAIR happened after September 11, 2001. It’s a landmark year for many Muslim Americans, , as Islam and Muslims continue to be demonized in the years since. But another thread that runs through Fouladhi’s life is his identity as an Iranian American.

“We were always hanging out throughout Southern California with other Iranians of different backgrounds,” Fouladi said of his family upbringing “But it was the communities most rooted in faith that we felt most comfortable with.”

True to some of the stereotypes, Iranians he grew up around loved their chai and BMWs, Fouladi said – but it was also a very diverse community, ranging from the “very religious to the extremely liberal Iranians who you would see on TV every once in a while.”

Cultural pride was a big part of growing up in the Iranian community. “When it comes to holidays like New Years (Norwuz), we would always have big get-togethers and picnics we’d go to. An emphasis of the importance of history and education, deference and respect to elders, all were things that were passed down by my parents. It was these things that stuck out to me about my Iranian identity.”

Many years later Fouladhi became more cognizant of his Muslim identity. “In 2015, with Obama’s Visa Waiver Program, I started to notice that yes, I will be discriminated against because I’m Muslim, but being an Iranian Muslim, I get the double whammy! So that became more and more of a realization.”

Then, the Trump Administration proposed and implemented a ban on immigration from seven predominantly Muslim countries. ”When the Muslim Ban came out…Iran was on every iteration of that ban,” Fouladi said. “And even how the Ban was set up: certain professors and students can still come, so we are importing talent from foreign countries if it aligns with what we want, but anything else we don’t understand we keep out. For myself, for my kids, for my community going forward, it’s going to continue to be an issue, especially as tensions and diplomacy with Iran – in light of the current administration – continue.”

It is his work at CAIR where Fouladi feels he can help the most. Since becoming CAIR-WA’s Executive Director, Fouladi visited local mosques for Friday prayers, talked with the people, analyzed hate crime statistics, and focused on issues facing the Northwest Muslim community. ”Within the scope of CAIR, our work with bullying of Muslim students in schools, questions of immigration and citizenship, and hate crimes are some of the greatest challenges,” Fouladi said.

While working at CAIR-LA, Fouladhi found that bullying in schools was a pressing issue for the Muslim community. It’s a problem in Seattle as well, where 20 percent of students who reported being bullied were targeted for being Muslim. CAIR-WA’s school bullying survey is currently gathering data, hopefully to help push policy change. (CAIR-WA publishes data online and can be found at cairwa.org/annual report.)

CAIR-WA hopes to raise awareness about government programs such as the FBI’s CARRP and undercover agents surveilling mosques in the name of counter-terrorism. This is particularly pertinent here in Seattle as a tech hub, Fouladi said, because surveillance technology to watch American Muslims is being created by local companies that are then profiting off of the persecution of the community. Fouladi would like to see CAIR-WA hone in on the issue of surveillance

CAIR-WA also advocates for Muslims caught in the immigration system of the United States, offering both legal advice and action.

Many issues outside the scope of CAIR are also of concern to local Muslims, Fouladi said. “Homelessness, poverty, and gentrification are all issues that impact the Muslim community. Gentrification is especially an issue in Seattle and the surrounding suburbs as many communities of color are under threat of it, and we are not the exception.”

Even with such an enormous amount to grapple with, Fouladhi assured me he gets plenty of sleep each night and when feeling stressed, he visits Cafe Turko in Fremont. “The kebabs are some of my favorite and I love digging into some knafeh afterwards, which also appear in Iranian cuisine. The owners are very kind and generous, with roots deep in the local Muslim community, so when I’m stressed I go there and feel at home.”

“The history of so many communities of color and their oppression, and when they spoke up the repercussions were so great, it really makes this hadith hit home, as we are supposed to have the freedom of speech, for example, and equality for all, Fouladi said. “So I wanted to be in a position where I could not only speak up for my community, but other communities who need an advocate.”