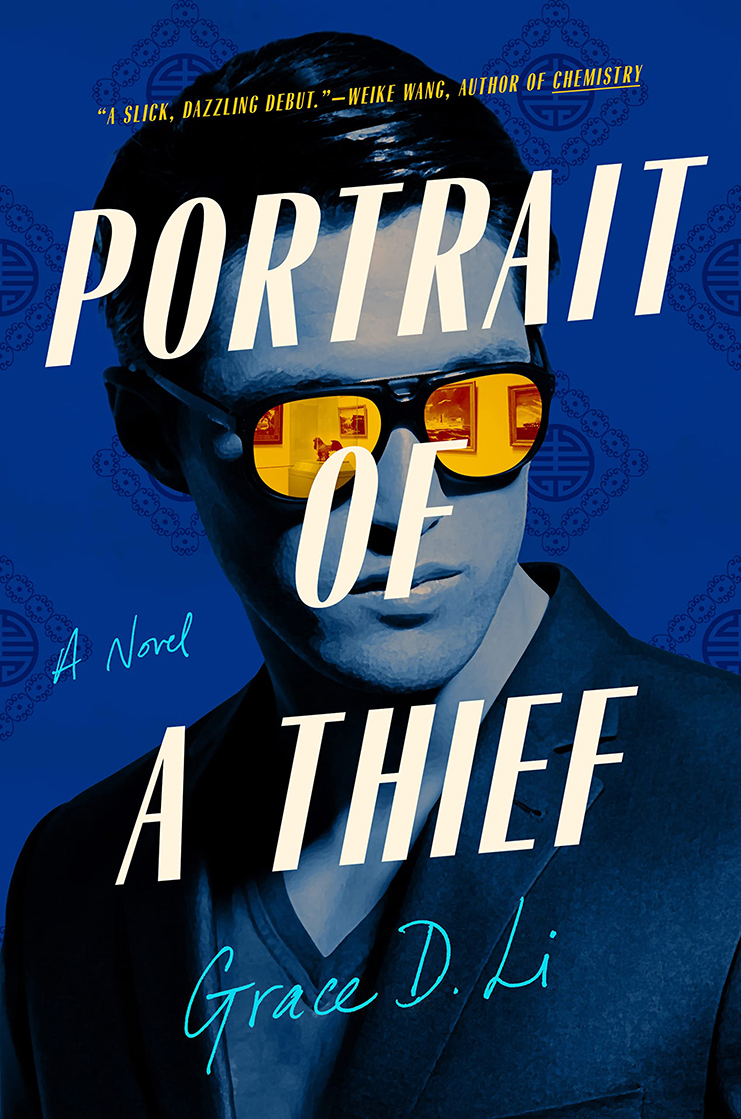 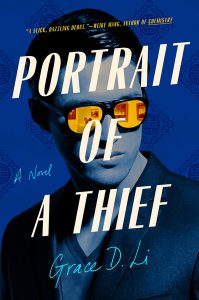 Museums all over the western world proudly showcase priceless art stolen from other countries through war and conquest, a side benefit of colonialism and imperialism. Many of those countries want their art and cultural identity back, but museums refuse to part with the pieces. Portrait of a Thief is based on the true story of Chinese art that has gone missing from western museums. The book is in response to the question: Who’s stealing the art?

In Portrait of a Thief, Stanford medical student and debut novelist, Grace D. Li, spins an intricate heist story juxtaposed with a pitch-perfect depiction of the complex nature of immigrant identity.

Second generation Chinese American Will Jiatong Chen’s life as an art thief begins at the Sackler Museum, where he works part-time while he is a senior at Harvard majoring in art history. He gets caught up in a theft of Chinese art in progress at the museum and palms a jade tiger. Will’s relationship with art is complicated – all-consuming, covetous and possessive. He is passionate about Chinese art being returned to the Chinese, so when the opportunity arises to make history, he is all in. Persuasive and a planner, he is the perfect leader of the heist crew he assembles.

Alex Huang, born in New York’s Chinatown, is third-generation Chinese American. Now, living on the opposite coast and working at a tech giant making good money, she dreams of being home. She dropped out of MIT when Silicon Valley came calling because money was needed for her family. But she is lost, so far away from everything that is familiar. Brilliant and focused, she is the ideal hacker of their band.

Will’s younger sister, Irene Jiaqi Chen, is a junior and a public policy major on a full-ride scholarship at Duke. She is familiar with the players who caused the rise and fall of superpowers. She has spent her whole life doing everything right, always implicitly or explicitly in competition with Will. She can talk herself into and out of any situation with confidence and élan. The world gives way for her – people scurrying to give her what she wants, unable to say ‘no.’ She is the group’s con artist.

Lily Wu, a second generation Chinese American from Galveston, Texas, is Irene’s roommate. She’s a junior in Duke’s engineering department. Lily was brought up as an American without a past; her parents shut her out of their lives in China, and Lily has always been uncomfortable in her skin. No identity seems to fit her. Lily lives for street racing in the nights, for the bite of the cold on her skin, the smell of gasoline in the air, and the throbbing of the car steering wheel under her palms. She can hotwire a motorboat and she can outrace a Lamborghini. She is the perfect getaway driver of their group.

Daniel Danli Liang is a first generation Chinese American and a senior premed student at UCLA. Will, Irene and Daniel spent their teen years together in the Bay Area. Daniel was born in China and despite 10 years in America, he still dreams in Chinese. He lives for his trips home. But thoughts of China are also fraught with despair because they left a happy life there to rush to America to save his mother’s life. Her death fractured Daniel and his father’s relationship. He is the thief in their circle with precise hands for lockpicking. His biggest handicap is that his father is FBI’s highly regarded art expert and investigator, specializing in Chinese art. Despite this, Irene is able to talk him into joining the crew.

China Poly is a shadowy company in Beijing that commissions thefts of Chinese art from international museums. Their mission is to bring the looted art home where it belongs. The five young people are tasked with returning the five bronze fountainheads in the shape of Chinese zodiac animals that were robbed from the Old Summer Palace in Beijing in the 19th century during the Opium Wars. Without going into depth about colonialism in the art world, Portrait of a Thief relies on the pull of emotions in the diaspora of belonging to the mother country and of righting a wrong done to it to justify the characters’ actions to the reader. And within the parameters of the story, the book succeeds on being convincing.

All five of the protagonists are very well educated and are poised to take the next critical, and exciting, step in their young lives. And yet, they want more from the world than they were meant to have. They struggle to separate themselves from their family and responsibilities, all that they owe to the people in their lives – the eternal immigrant struggle. This heist feels like it is their turn to do something they believe in for themselves. Each is invested in it despite the huge risk to their futures and the dreams they have dreamt. Other than Will, none of them cares much for art, but they understand power and how those with it always take from those without. The fifty-million-dollar prize money would make the world their oyster.

Li’s prose is a masterclass in evocative, nuanced writing. For a debut author, she writes with a confidence that allows her characters to grapple with their shifting identities as Chinese Americans, and in so doing, forge their own. Each character’s background and personality weighs in what they perceive their familial and societal influences to be. Li’s skill lies in showing newly minted adults of barely drinking age coming into their own through this process of discovery.

Portrait of a Thief publishes in April and is currently in development at Netflix, with Li serving as an executive producer for the series.