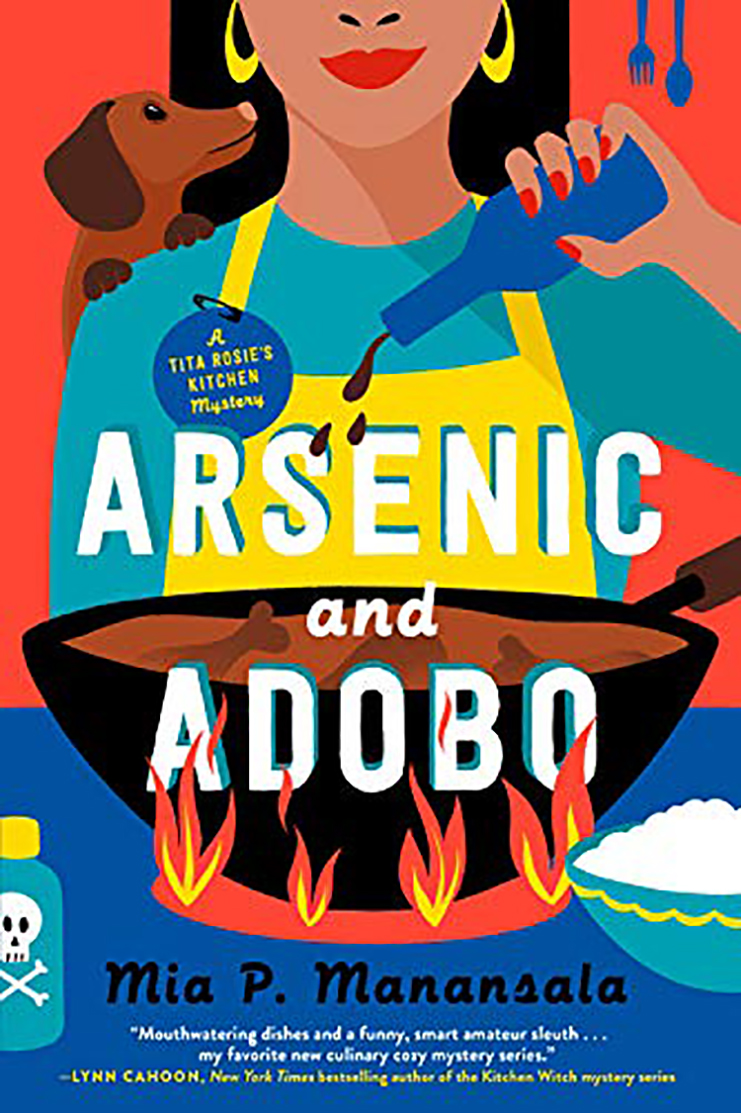 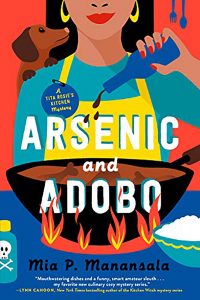 For Filipino Americans, there are three simple ingredients needed to peak their interests and open their hearts: Food, family and drama. In her debut cozy kitchen mystery series, Mia P. Manansala, delivers these three delectable things in her book Arsenic and Adobo. Manansala’s mouthwatering food descriptions directly place readers into the small-town restaurants of Shady Palms, and for Filipinos everywhere, we are able to find comfort in a Filipino household that is not our own.

In an effort to support her aunties’ Filipino restaurant in Shady Palms, Lila Magcapagal leaves her city-life, café-owning dreams and her cheating fiancé to return to her childhood home. When Derek, her high school sweetheart turned nasty food critic who targets small restaurants with slandering reviews, drops dead after eating the Filipino food that Lila just served, she gets thrown into the spotlight as the prime suspect. With the family’s business on the line and with Detective Park also accusing Lila to be the leader of a drug ring, Lila takes on the role of solving this mystery herself before it is too late. With the help of her best friend and local coffee connoisseur, Adeena, Lila cooks up a plan to save her family’s restaurant and to serve justice to the true killer of this case.

By leaning into many murder mystery cliches, the book doesn’t intend to stress out the readers, keeping a fun and lighthearted tone throughout. It is easy to read as there are many components that evoke different emotions. First, there is a love triangle between Lila, Amir, Adeena’s brother, and Jay the police detective’s brother. Also, in typical Filipino telenovela fashion, the family plays a key role from gossiping aunties to a shady stepfather with unclear motives. Lila, like many protagonists, takes the role of the amateur sleuth whose answers seem to always find her due to her passion and grit. And best of all we have a dog named Longganisa, which is a Filipino kid’s favorite breakfast sausage!

These cliches however, end up getting in the way of fully developed characters. Cliches take the place of exploring emotions like grief, and reactions from characters seem unrealistic or passive. Many characters are dealing with death, domestic abuse, familial pressures and other hard emotions that readers can also relate to. However these characters, including Lila, just kind of brush them off as minor inconveniences. One example is of how Derek’s mother is at her son’s funeral in one chapter and in the next she is at Lila’s house enjoying coffee and gossiping.  Although Lila is the main suspect, nobody in the town seems to take that into account as she, a complete stranger, casually questions them and miraculously gets the answer she is looking for. Even if they are saying new pieces of information, a lot of it seem redundant, leading to issues that contribute nothing to the story. I did appreciate the mouthwatering descriptions of the food that Lila had encountered during her investigation. The descriptions and the random tidbits of information we receive leave the reader confused but perhaps this works in Manansala’s favor.

On the flip side, its obvious and admitted cliches, relatable multicultural characters, and the urge to find the killer set up the readers for a series of twists. While realistic reactions to strong emotions were absent, the relationships that Lila had with her friends and family were really the highlights of the book. Lilas investigation reveals the killer but also reveals how flawed yet persistent she is, which is very human. Her relationship with Adeena uncovers themes of drug abuse, clear communication in healthy relationships, and the lesbian of color experience.  Her love triangle with Jay reveals struggles of Asian immigrant children and not wanting to let their families down. On Amir’s side of things we learn about internal family power struggles. As for her family members, her Lola Flor (grandma) teaches us about intergenerational trauma and different types of matriarchal family structures. With her aunties, also called “The Calendar Crew”, although sometimes stereotypical, we learn more about communal ways of knowledge creation and distribution.

There are also underlying themes of racism explored in the book. Detective Park brings in the realities of police manipulation and harassment against people of color and also shows how “community cops” are also complicit in causing harm. Lila’s interaction with the various restaurant owners uncover experiences with immigration patrols and discrimination by those in positions of power. These same interactions are also what makes this novel cozy. Whether it be the Black owned breakfast diner, Japanese sushi spot or the Mexican restaurant, Manansala emphasizes food as a universal love language and as a way to build unsaid ties, which in reality is very common for many communities of color. Bringing one’s culture into the white dominated mainstream is difficult, and I sincerely applaud the author for weaving Filipino American culture into something so lighthearted and fun.

Manansala is also clearly intentional with portraying these themes. In the beginning of the book Manansala gave a trigger warning to those who were going to read, an explanation of the differences in perception between Filipino Americans and Filipinos living in the Philippines, and a few resources about the Drug War in the Philippines. As someone living in the diaspora, I definitely appreciate this intention that Manansala put forth!

At the end of my reading, I found myself hungry for the sequel, intrigued by the potential growth in Lila’s story, and a newfound interest surrounding the cozy kitchen cliche.