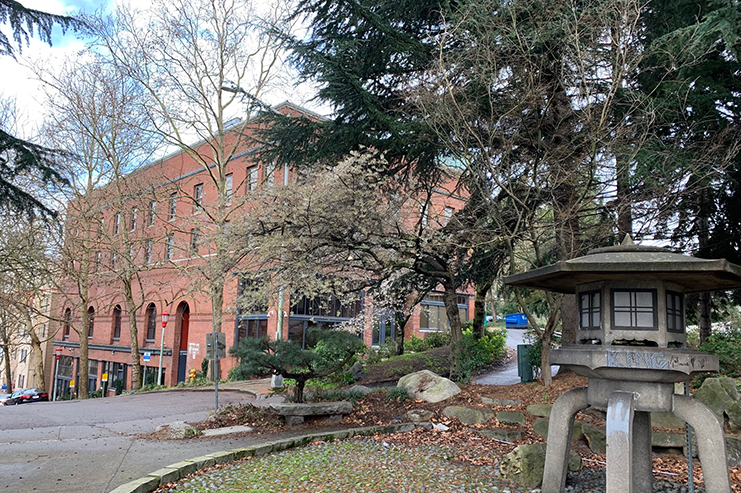 This is the first installment of an essay series annotating and exploring the intersection of history, architecture, and activism in the Chinatown International District.

Buildings ask little of us compared to what we ask of them. This thought crossed my mind as I slipped out of an unrelenting downpour last October and into King Noodle, where I was picking up my congee order with a plan to eat it under the pagoda in Hing Hay Park. Sometimes I sit under there when the weather is bad. No one’s out then. It’s peaceful. However, that day the pagoda was already sheltering a few of my unhoused neighbors, so I carried my order home to eat. How fortunate was I to have a home to return to. That pagoda, the four walls and ceiling of a noodle house, and my tiny studio apartment all performed a simple function that day, mercifully protecting both myself and other feeble humans from the ambient wrath of the world.

Though things never stand still, explained Professor Jeff Hou, the basic groundwork for how a building serves a community remains the same. Housing, commerce, and public use. Hou, a longtime faculty member at the University of Washington’s Department of Landscape Architecture, explains how buildings are an important part of the fabric of a neighborhood like the Chinatown-International District (CID), which relies heavily on retail businesses, restaurants, grocery shops, and public institutions like the library or post office. “All of these necessitate some kind of basic infrastructure to be useful to us,” Hou told me. “Buildings are the building blocks of a society without which we simply could not function.”

I’ve lived in the CID for two years this March, the duration of the COVID-19 crisis. I often go on long walks with no destination around the city, a ritual I’ve trusted since I moved to the area shortly before the first lockdown. I’d trek through the shadow of the Bush Hotel, passing grocers outside Dong Sing Market emerging onto the sidewalk with large crates of fresh produce in the morning, wander aimlessly for hours, and then see them rolling it all back inside empty when I returned at night. If I venture away from home for miles, I’m forced to get back somehow. It’s this mechanical rhythm of meander and return that I’m certain keeps me from losing the threads inside my brain entirely sometimes.

On one such expedition several springs ago, I came across the Nippon Kan Theatre. I was crabby and my mood had just worsened after some pigeons pooped into my coffee thermos as I strolled through Kobe Terrace Park. I looked up angrily to really let them know I was pissed. My vendetta vanished when I became distracted by an impressive old brick building, hidden just beyond the northwest edge of the park and flanked by flowering cherry blossoms. What was this place, I thought, as I wandered its perimeter. It was deserted, but it was 2020 and everything was quiet but the dull roar of collective outrage. I peered into the building’s darkened windows, yet nothing clued me in except the name on the front so I bookmarked it for later.

What I learned about the theater, which I’ll detail in a later column, motivated me to further develop my architectural and historical senses. Why do some buildings survive while others do not? I asked Professor Hou if he thought the CID would be the same if these standing relics were leveled without a trace. “To some extent, some aspects of the community could remain, but not quite in the same way,” he replied. “There’s a difference between tangible and intangible heritage. Tangible heritage includes buildings and artifacts. Intangible heritage refers to music, cuisine, languages, and stories. It’s important to maintain both because I think they often walk together, impossible to separate. The intangible aspect of the community cannot exist alone.”

Many CID buildings were constructed around the turn of the 20th century, reflecting both the aesthetic styles and restrictions of that period. “Early immigrants didn’t want to stand out so a lot of cultural heritage wasn’t reflected in the built environment,” said Hou. “Building design was also limited by the craftsmanship and building technique, as well as the availability of building materials. Over time, the neighborhood began to slowly acquire an identity of its own.” I pointed out that many old structures here are made of brick and wondered if this makes them vulnerable to collapse. Yes, he confirmed, the endangerment of unreinforced masonry buildings is an imminent issue and Seattle is actually home to a large concentration of them.

The CID is classified as one of Seattle’s eight historic districts, which means that the cultural integrity of a portion of its structures and public spaces are regulated by the International Special Review District Board (ISRD), elected stakeholders including property owners, employees, tenants and residents, and two members appointed by the Mayor’s Office. ISRD’s oversight is undeniably an important legal apparatus and policy convention that helps parry the ravages of time, yet gentrification remains inevitable under capitalism. Luckily, the CID is a good example of how to resist because its historical overlay, stewarded by local community groups, protects it somewhat from developers with dollar signs for eyes and the latest market research in tow.

Here’s where I come in. I’m a younger resident of the CID who has lived in Seattle for most of my life. From 2010 to 2020 — that’s ages 15 to 25 for me — Seattle’s population grew by 21%, according to the Seattle Times. It’s no secret how the astronomical growth of my hometown directly correlates with its intensifying housing crisis, increasing at a rate faster than enough suitable affordable housing can be established as local legislation navigates through the red tape of private equity, the interests of Big Business, and the political hoopla of mayors and city councils come and gone. I do try to maintain a nuanced perspective of gentrification beyond just new people… bad, locals… good, so to clarify, that is not the primary concern here.

I recently attended a housewarming party to which I received a courteous but likely empty invitation. I knew no one there and I think the couple who owned the house were genuinely aghast when I arrived with a gift wrapped in what I thought was festive holiday paper but was actually green paper covered in raw steaks. Anyhow, one guy I met there, who was white and worked for Apple, said he had just purchased a home in the Central District, which a quick probe into its cultural past and current circumstances might’ve revealed, is a gentrifying historically Black area. I share this to illustrate the role of arguably innocent ignorance. The face of change is often just one of the three friendly but oblivious dudes named Jake from the Bay Area at a party.

While change is necessary and healthy, knowing more about who and what came before would enable us to make considerate decisions regarding our impact on our cities of the future. For instance, the CID exists out of struggle rather than spite. Years of infringing development, redlining, racism, time, the free market, the ignorance of Jakes, and a global pandemic that produced a significant increase in anti-Asian violence have all tested its resolve. But it’s still here and so are we. I asked Hou what I could learn about survival from a venerable building. “Buildings themselves are important because they are signifiers of a community’s oral histories,” he told me. “But buildings can’t tell their own stories. They require people, storytellers to help.”

This is the first in a forthcoming series of columns where I’ll dig into a historical building of the CID to explore whether its history, occupants, function, and architecture might relate wisdom on adapting, carrying on, and gaining perspective when reality feels bleak. Antiquated things disrupt the boundless flow of information by being here, now, like you who is reading this or me who is writing it. To think, had I not been stirred out of my baseline stupor to glare meaningfully upward at the pigeon tornado above that day, I’d have missed out on a lot. Resilience, if we are to accept the allegory, can be exemplified in the storied beams and bricks of an ecosystem called the Chinatown-International District. Now, if you’ll excuse me, I’m off for a walk.