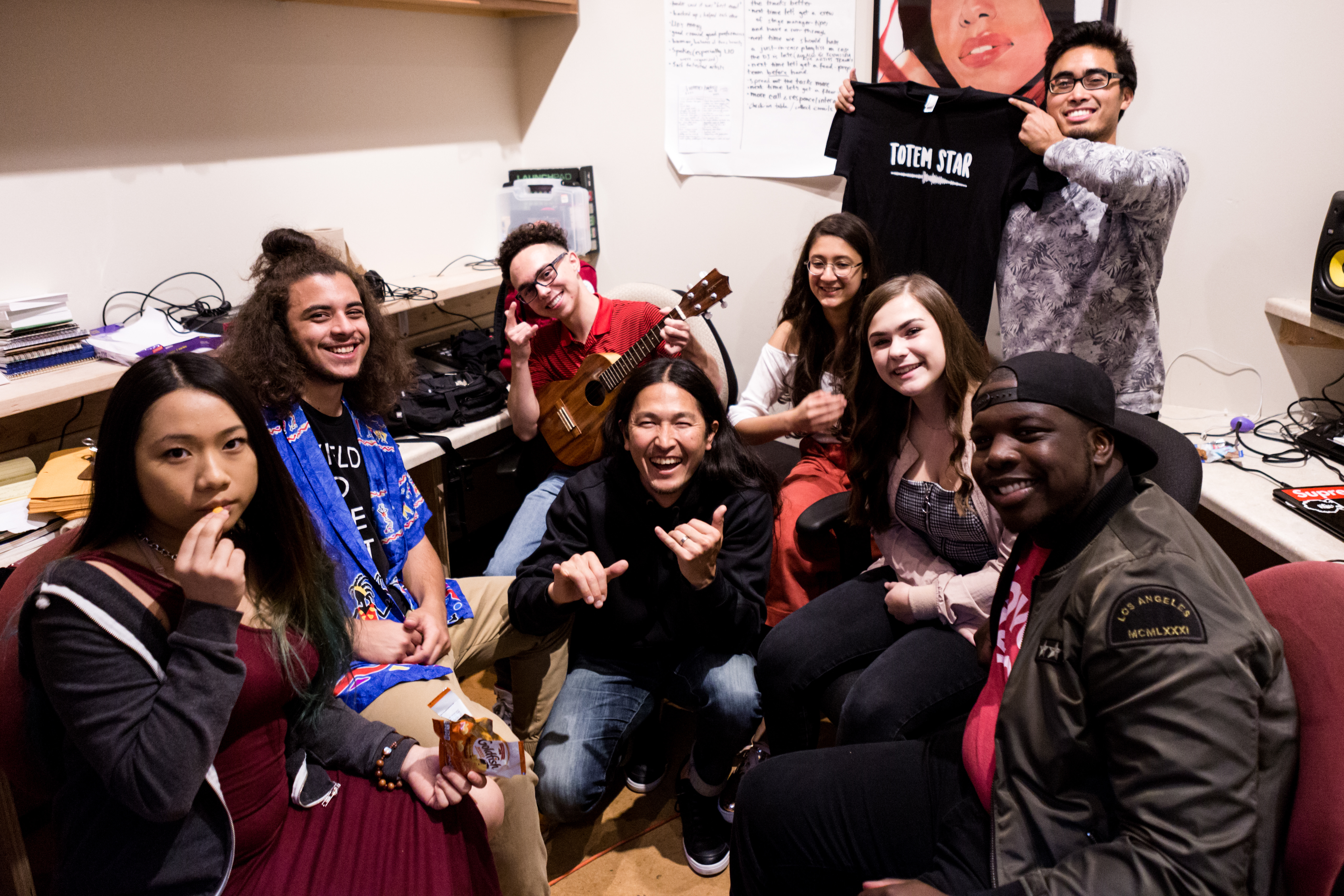 What happens to a city when its cultural pulse stops beating? Can creative expression within marginalized communities survive against the ambitions of venture capitalists and developers? These are the questions that Daniel Pak, the executive director and co-founder of the arts non-profit Totem Star, is asking with a wariness of the answers.

“We can’t just yell at cranes,” he laments. “We have to demonstrate how important cultural space is for a robust community, how it can uplift a community.”

Pak’s organization, along with the Wing Luke Museum, 21 Progress and the International Capoeira Angola Foundation (ICAF Seattle), are among a total of 14 groups to receive funding from the Seattle Foundation’s pilot initiative, the Creative Equity Fund. The fund, launched in 2018, awarded $200,000 in grant money to those using arts and culture as a strategy to address structural racism.

Of those organizations selected, the neighborhood with the most representation is the Chinatown-International District (CID.)

“With the Creative Equity Fund, we wanted to help increase trust in our community,” says Jonathan Cunningham, a program officer with the Seattle Foundation. Their new initiative, he explains, transforms the top-down hierarchy of traditional philanthropy wherein a funder holds all of the decision-making power. A cross sector group of community members, all of whom are people of color with arts and culture experience, were recruited to co-design and administer this new approach to foundation giving.

Stephenie Lock and Mozart Guerrier of 21 Progress, with offices in the CID, write in an email that during their site visit, the Creative Equity Fund committee “offered a perspective that honored the challenges” faced by people in their community.

“We quickly found ourselves losing track of time, sharing stories of the local arts and cultural experiences that have shaped and defined us as people.”

21 Progress focuses on developing the next generation of social change leaders in diverse communities by organizing community-based workshops and speaker events and by assisting immigrants. They will put their grant funding toward the organization’s ‘purpose dinners,’ an event series to discuss, reflect, and act on issues of race and justice. Participants will come together in creating a mixed media art piece to be showcased in a culminating Art, Race, and Future gallery exhibition.

“It’s rare that everyday people get the opportunity to talk about race around the dinner table,” Lock and Guerrier wrote in an email. “As gentrification and displacement increases, it is scary to observe cultural institutions for people of color be erased and a growing sense of isolation and cultural loss in our region.”

They aren’t alone in this sentiment. Going into 2019 and beyond, one such cultural institution, the Wing Luke Museum, sees its work as imperative as ever. The Wing presents the Asian Pacific Islander American experience through its creative exhibitions, walking tours, programming, and storytelling. The Wing recently celebrated its 50th anniversary and shows no signs of slowing down.

“The survival of our neighborhood is no guarantee,” said Cassie Chinn, the museum’s deputy executive director. “I’m grateful that we have this platform that has been created and sustained by community to build from. We also know that nationally the Asian Pacific American communities have a long way to go to achieving recognition and voice.”

The Wing will use its grant from the Creative Equity Fund to update Seattle’s former INS Building, now INScape Arts, which was originally built by the federal government in 1932 to detain and interrogate Chinese immigrants as a result of the Chinese Exclusion Act. The building itself was operational until 2004, serving as an entry point for Asian Pacific Islanders, as well as Latinx and Eastern European immigrants. It was often the site of their detention and deportation. The Wing now has a permanent art installation in the space called Voices of the Immigration Station: 72 Years of History on 5 Floors.

“Our current work will include significant updates in light of policies and actions by the current federal administration and provide tours of the INS Building to ensure that the stories, faces, and voices of former occupants, detainees, and prisoners are not forgotten,” says Chinn. “We also will expand our website resources on this topic.”

Other organizations are also reevaluating the scope of their work in the national political climate. In the midst of the longest-ever government shutdown over the construction of a border wall, the Creative Equity Fund grants come at a critical time for organizations serving immigrants, refugees, and communities of color.

ICAF Seattle, another organization located in the CID, explores healing for immigrants and marginalized groups by practicing and preserving Capoeira Angola, an African Brazilian martial art that was used by enslaved Africans in Brazil to fight back against colonial powers seeking economic dominance since the 1500s.
Though outlawed for nearly 400 years, the rhythmic art form survives today to celebrate the power and lineage of singing, music, and body movement in the fight for true liberation.

“We are actively creating programs and events to promote cultural arts as a form of resistance and a source of healing within communities displaced by colonialism,” says Silvio dos Reis, lead teacher and organizer with the Union Cultural Center (UCC), where ICAF-Seattle is housed. All classes are taught by teaching artists that come from the art’s country of origin, he says, which offers an opportunity to educate and dialogue with one another about how this particular technique intersects with other systems of subjugation.

“Capoeira was born out of resistance against oppression, giving creative expression to self-defense” says dos Reis. “It builds self-control and discipline while also learning how to respond to aggression with a graceful and witty response. It’s a powerful outlet for both community building and personal empowerment.”Now with the Creative Equity Fund award, ICAF Seattle will continue to offer its core programming, hopefully increasing the number of attendees of color.

They’re planning to bring classes to places in South Seattle, such as Rainier Beach Community Center and the South Shore K-8 School, where the non-profit will offer free after-school programming for student youth to help fill the arts-education gap in public schools, an increasingly prevalent issue that organizations like ICAF Seattle and Totem Star are working to close.

“In schools, the arts are always the first things to get cut,” says Daniel Pak of Totem Star. “I’m on the board of my kid’s school and they are really trying to look at mental health. Something like 15 percent don’t have an adult that they can go to for support. A place where you can really depend on a grown-up? That’s huge.”

As a singer-songwriter himself, Pak describes Totem Star as a sanctuary for young recording artists to come and make music. Everything is youth-led. They come with their ideas, melodies, lyrics, or beats, and the Totem Star teaching artists are simply there to support them as producers, engineers, and mentors, operating much like an artist development department at a record label might.

“There is no judgment. All we’re trying to do is cultivate a community of conscious and respectful artists. We understand that they’ve been in an institution for eight hours already, why would they want to come to another one? They want to be free,” Pak says.

Totem Star got its start in 2010 working with young people released from juvenile detention. Today, it serves minority youth from many different ethnic and cultural backgrounds. Totem Star will put its Creative Equity Fund money toward general operations and core programming, and hopefully, toward expanding its space, which Pak knows would have a much greater impact on the pockets of youth that need support throughout the region: maybe satellite programs, a centrally located headquarters in the CID, and a sprinter van to use as a mobile recording studio for weeklong residencies.

Pak says it’s difficult navigating the nonprofit corporate complex, especially in a developer’s paradise like Seattle. He describes conversations with family foundations that scoff at the idea of learning more about diversity, equity and inclusion, which he suspects is because they rarely leave the comfort of their socioeconomic bubbles.

“Maybe it’s a God-complex or the fact that a lot of these funders don’t even drive to the South End, they spend their whole lives in Broadmoor,” jokes Pak. “Within the arts, a very small margin of funding comes from foundational giving. Look closer — it’s theater, opera and ballet that receive the bulk of that small percentage. I can only imagine who is sitting in those rooms making those decisions.”

Pak thinks the Creative Equity Fund is fantastic revolutionary giving and is setting the stage for where philanthropy needs to go. But as Seattle’s landscape changes, will there be room for adventure or creativity or discovery? Cultural space is dwindling, he says, and without it, Seattle will lose its roots.

“We still have so much work to do. They can’t just give away hundreds of thousands and be good. Where are the millions? We can’t keep fighting over crumbs. When you look all the way to the top, that’s just not equity.”

To learn more about these organizations, visit their websites: