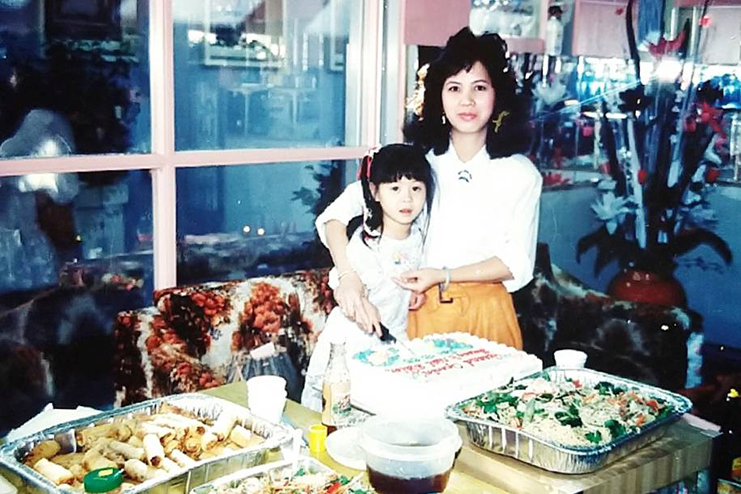 The 2019 Seattle Asian American Film Festival features Nailed It, a documentary detailing the origins of the Vietnamese affiliation with the U.S. nail industry. Susan Lieu, whose mother died due to the negligence of a cosmetic surgeon, says the number one customer for plastic surgery among the Vietnamese are nail salon workers. Lieu’s parents opened Susan’s Nails in the Bay Area after fleeing Vietnam’s Communist regime by way of a refugee camp in Malaysia.

Ha blindly trusted Moglen’s outreach to the Vietnamese community; she hadn’t done her research. Moglen was on probation and had been sanctioned twice by the Medical Board. Nearly 25 lawsuits manifested during Moglen’s lifetime by women whose bodies were disfigured and permanently damaged.

Ha enlisted Moglen for a tummy tuck, chin implant and the narrowing of her nostrils. Two hours into the operation on September 27, 1996, she lost oxygen to her brain, which results in permanent brain damage after four minutes. Fourteen minutes passed before Moglen called 9-1-1. Once at the hospital, just two blocks away, Ha flatlined after five days in a coma and didn’t come home.

Only 11 when her mother died, Lieu sought justice as an adult for Ha’s death. But the statute of limitations had passed. Moglen never paid her family a dime.

140 LBS is about how Lieu worked out the details around the incident and found peace and closure. But it is both broader and deeper. In no particular order, here’s why you should consider seeing this show.

1. The incredible director and performance artist-activist Sara Porkalob is involved.

“In October 2017, Susan asked me out for coffee to talk about autobiographical solo work,” said director Sara Porkalob in an email.”She was preparing the very first version, and a mutual friend [Sarah McKinley, owner of the Pocket Theater] recommended she reach out to me as I had been developing my series of autobiographical plays for the last three years.”

“Sara had an hour, so we just met after rehearsal over a croissant at Chaco Canyon,” recalled Lieu. “I told her my story and I cried – it was very emotional for me. But then she started coaching me about different gestures I could do. And then the hour was up, and she left.”

“The very first meeting, the thing I remember most was her fervor and her deep desire to know, avenge her mother and all her family,” said Porkalob. “At the heart of my work is the same thing, AND our stories are very different.”

Just the month before, at one of Porkalob’s Dragon Lady shows at Intiman Theatre, she invited an audience volunteer to dance with her on stage. That volunteer was Susan.

“I remember thinking, I’m dancing on stage with Sara Porkalob! I’m touching the body of a goddess!” said Lieu.

For that reason, the one-woman show veteran meets up-and-coming one-woman show artist was a match made in heaven. Lieu said she has relished the opportunity to work with Porkalob and given it her all. “I wanted to bring my best self with her. When she asks me to write nine scenes, I give her 22. When she asks for three scenarios, or vehicles to tie things together, I give her seven.”

“While she [Lieu] is a relatively new performance artist, a person’s level of experience isn’t a determining factor in my decision to work with them,” said Porkalob. “I collaborate with artists who use their work as a tool for social justice and who are contributing intersectional narratives full of truth. Susan is doing all of that and more. I feel very lucky and privileged to watch her expand, deepen, and share this story with the world.”

Porkalob will join Lieu for the Director & Artist’s Talkback with the audience after the February 11 show.

As the youngest of four, Lieu had the least time with her mother alive. In the play, Lieu recalls her last words to her mother, “I hate you!”, for not allowing her to attend volleyball tryouts since she wanted Lieu to focus on schoolwork (many Asian Americans will identify with this dynamic). She connects with her mother through visits and visions and laments how she missed her mother’s presence at her wedding, when her mother-in-law dressed her.

When she said goodbye to her mother’s corpse, she recalls asking her mother to go to college with her. The disappointment and sorrow Lieu has experienced as the fallout from Phuong’s death is palpable. The eventual way that Lieu finds healing, through connection with her mother in the afterlife, and the conversations she and her sister Wendy have in appealing to her maternal spirit are touching and relatable.

3. The play mixes tragedy with humor, and examines the different ways an immigrant family heals.

For such a heavy subject, Lieu has stayed true to her comedic roots by infusing elements of humor into the script to allow the audience to “breathe.” Lieu began performing stand-up comedy in 2012. She headlined a show at the Purple Onion in San Francisco and performed a set in New York City at Caroline’s on Broadway. Before her performance classes at the Freehold Theater, Lieu also took Improv 101 with JCI and participated in the digital short “Phofamily Feud” and a music video “Love is the Answer” by Ayron Jones.

“Performance has been knocking on my door for so long,” Lieu said, “The few times, I’ve attempted it, I put so much pressure on myself. After a solo performance class during summer 2017, I thought, you know, this can be my year of just experimentation, of performance. I just want to find a medium.”

She’s found a niche by sharing a tragic family story with moments of levity and lightness.

The commentary on the Lieu family’s healing and forgiveness after tragedy is significant as well, in that everyone heals differently and on their own timeline. After her education at Ivy League schools, where Lieu learns the meaning of exploitation and intergenerational trauma, Lieu has a resurgence of vengeance for her mother’s death and strong pursuit to piece together who Ha was. Meanwhile, it is painful for her father and aunts, who don’t want to talk about sad things and urge her to “let it go.”

“She had to die,” Lieu’s father says. “To go deep is to know more. To know more, nobody benefit, nobody win.”

During the course of her pursuit, Lieu got feedback from her siblings ranging from confusion to resentment. Some felt she was dishonoring their mother and exploiting the family’s story. What’s significant now is that the family understands her process. Some of them have contributed family photos and an heirloom to the show. Susan’s sister and one of her brothers will attend the closing show on February 17, which will include Q&A with the artist and her family, who will see it for the first time.

4. The play touches on critical themes of beauty, body and death.

The heaviness of the play comes in the messages around self-acceptance. Though she was already pretty, Lieu’s mother struggled with accepting herself as she was.

“In my mother’s medical report it was noted that she had excess fat typical of multiple-term pregnancies,” Lieu writes in her script. “But I think the combination of her sitting in her nail salon chair all day and our constant fixation on perfection was what finally got to her.”

Lieu relates to the struggle. She talked about how ironic it is that the very family members who told her she was fat would in the next breath, tell her to eat more. Her godmother also warned her when she was 12 years old and a size 4 that no one would love her if she didn’t lose weight, saying, “I tell you because I love you.”

Lieu urges people to protect their bodies by doing due diligence before invasive procedures, check where societal messages about beauty come from, accept that we will all one day die and thus, we should live our best lives now. Lieu gave a KING5 interview on these themes before her Bumbershoot 2018 show. Watch the clip here.

5. Asian Americans will recognize themselves in both cultural references and the stories of immigration for the American Dream.

Whether it is recognizing yourself in the dialogue where Asian parents compare the achievements of each others’ children, or tell their kids they love them by asking if they’ve eaten yet, you will enjoy the cultural references in this show. They are delightfully sprinkled throughout the narrative, sometimes rippling over in unapologetic waves – characters asking each other for discounts, playing a game of getting the most buffet food for the least money.

Lieu’s mom is credited with bringing her whole family over from Vietnam to pursue the American Dream. It worked in spades – her husband and children are all small business entrepreneurs, working in the land of chocolate, dentistry, gardening, almond milk, performance art and nails.

“I don’t know if it’s a Vietnamese thing. We just don’t want to have a boss,” Lieu quipped.

In her determined efforts to get here, Lieu’s mom saved money through winning the lotto in Vietnam three times. She then bought a “guaranteed ticket” that allowed her multiple attempts to smuggle to a Malaysian refugee camp and escape the Communist regime. When she got to the U.S. after six attempts by boat, she sponsored the arrival of her three sisters and parents. At one point they had 13 people in a four-bedroom house. It’s a picture of sacrifices involved in immigrant life that will resonate.

When Lieu’s mother pursued a career in nails, she worked almost everyday as well as weekends. She treated herself to only one Sizzler meal a year. One of my favorite lines in the play is when Ha and her sisters celebrate having an entire steak to eat oneself as part of the American Dream.

For the incredible direction, Asian American themes, tragedy and humor, and commentary on themes of our day, Lieu’s show is a don’t-miss.

To buy tickets for the rest of her run, go to theatreoffjackson.org/event/140-lbs.