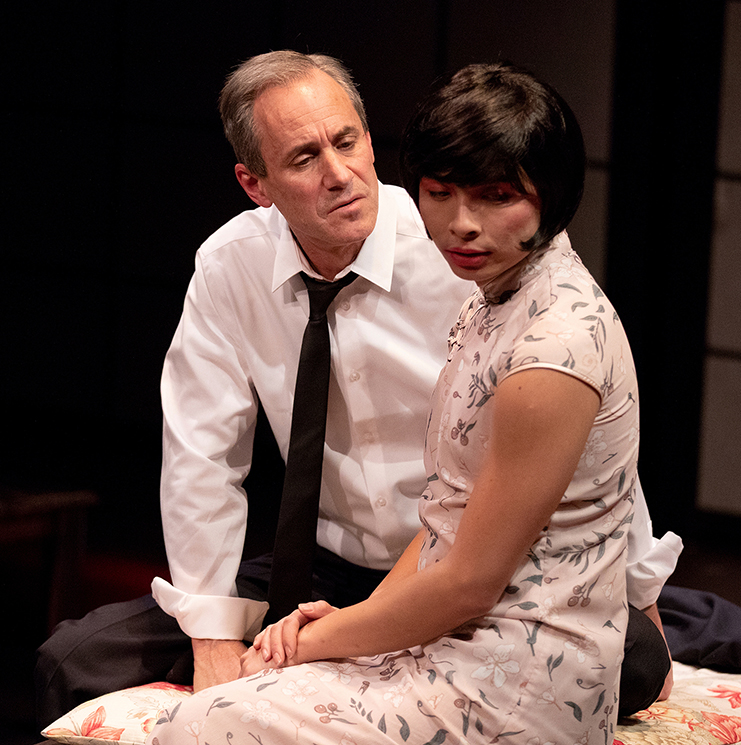 In M. Butterfly, the French civil servant is Rene Gallimard, and the Chinese opera singer is Song Liling. As the story progresses, Gallimard faces coming to terms with the fact that Song’s gender is not the same as those of his female opera roles.

Director Samip Raval is intrigued by the play’s explorations of deception and self-deception. “It’s rare to work on a play that dives into deeply complex socio-political themes that seamlessly manifest in human character as in David Henry Hwang’s M. Butterfly, Raval said. “We are humbled each and every day in the rehearsal room when we see the words from a different point of view or under the circumstance of different characters.”

Local actor Tom Dang is excited to take on the role of Song. “The topic matter presented in this play, gender expression, sexuality, East/West conflicts, is so relevant to today’s socio-political climate,” Dang said. “It’s also a role I haven’t explored yet in my work as an actor, so getting a chance to grow in that capacity was what motivated me to audition.”

Dang especially appreciates the layering of dramatic traditions in Hwang’s play. “I love the fact that the actor is asked to do a lot of physical showcasing,” Dang said. “There will be sections of the Chinese opera The Butterfly Lovers and White Snake performed on stage, as well as a short rendition of the death aria in Giacomo Puccini’s Madama Butterfly. These demands fit very nicely into my personal skillsets as an actor and I can’t wait to tackle them.”

Likewise, actor and dramaturg Kathy Hsieh highlights the multiple levels of cultural excavation in this play. “Hwang flips the racial constructs and stereotypes portrayed in the classic opera Madama Butterfly by paralleling it with the real-life story,” she said. “He also uses the real-life incident as a device to explore the socio-political relationship between East and West. And at its deepest level, he examines toxic masculinity and the relationship between male and female.”

In this production, Hsieh plays the role of Comrade Chin. “Chin’s scenes give the audience context for the backdrop of the story, the fact that these two characters met and developed a relationship during a time of incredible historical significance, just before and during China’s Cultural Revolution,” Hsieh said. “Metaphorically, Chin counters the submissive ‘lotus blossom’ stereotype of Asian women that many Westerners have.”

As dramaturg, Hsieh is pleased that ArtsWest selected the newer 2017 version of Hwang’s play for this production. “In this version, he’s actually evolved the script so that he is able to explore more dimensions to the relationship between the two lead characters, and in so doing, depicts how the West’s relationship with the East has also evolved in the 31 years since he wrote the first draft,” Hsieh said. “Another dimension of what is explored is a deeper examination of intersectionality, of gender fluidity, and about the nature of love.”

Hwang’s newer draft recognizes the social change that has occurred in the United States during the past few decades, which allows Hsieh to find her role more palatable. “In the original version, Comrade Chin is so homophobic that it was extremely challenging to say the lines she says or to even fathom that kind of disgust,” Hsieh said. “So for my audition, I had to replace her disgust of homosexuality by imagining pedophilia instead. That was the only way I could understand how someone could be so disgusted by another’s actions. Fortunately, in this updated version of the script, the homophobia is much more subtle.”

Hsieh finds that the personal and the political are particularly intertwined in this more recent revision of the play. “I’m actually fascinated by the way Hwang was able to include more of the real story in this version as a way of illuminating the evolvement of China’s diplomacy policy since the 1990’s, which was after the original M. Butterfly was written,” she said. “The biggest change in this updated version of M. Butterfly is a shift in tone that shows more of Song’s complexity and desire to be respected as an equal. This parallels China’s soft power strategy in desiring global respect and to be viewed as a world leader for its culture and investments in education, technology, and the environment.”

Dang echoes Hsieh’s sentiments. “I am very grateful to have an opportunity to portray an Asian LGBTQ character of such complexity and dimension,” he said.

He is showing his gratitude by throwing himself completely into preparation for the role of Song. “Outside of rehearsal, the most difficult thing I’ve done so far is dieting and working out,” Dang said. “In order to fit into my seven different dresses and get myself into physical condition to dance and do martial arts, I had to cut out foods that I love such as bread, rice, cookies and hot cocoa, and replace them with tuna, eggs, spinach, chicken and veggies.”

Dang has gotten serious about his workouts, as well. “At the gym I’ve doubled on cardio, lower body and core strength, while lifting for tone over size,” he said. “This dieting and workout plan is not something I’m used to, and it was difficult for the first three or so weeks, but I’m happy to say that the results are showing!”

This approach is being applied in rehearsal, as well. “Inside the rehearsal room, the most difficult thing has been to crack open the play’s nuances,” Dang said. “As actors, we have to always remember to play actions as opposed to concepts, but it’s so difficult because everything the characters say to each other is so layered.”

Director Raval agrees. “When you get to work on a play by a beautiful writer such as David Henry Hwang,” Raval said, “you hope the audience gets to see a production that allows for them to appreciate its richness, detail, and psychological complexity.”

Dang puts the point more bluntly. “Sometimes I leave rehearsals feeling like my head will explode from all the discoveries made.”