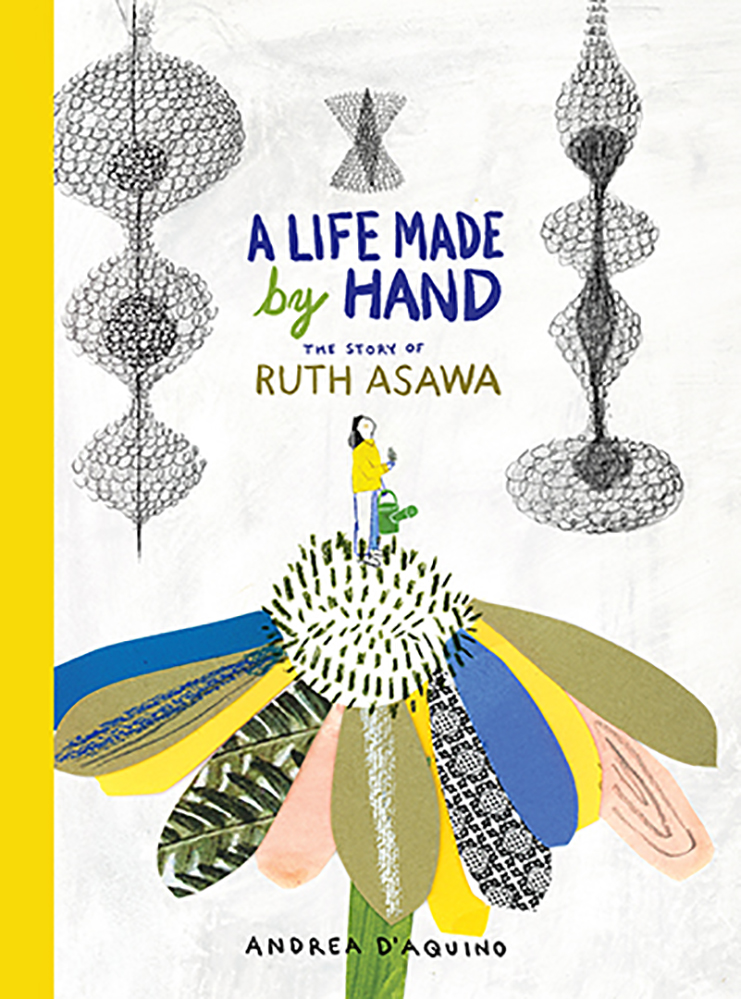 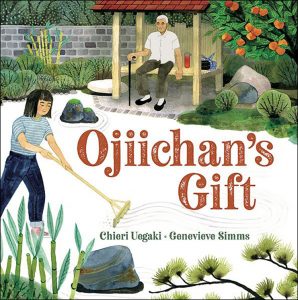 Ojiichan’s Gift illustrates the tender bond between a Japanese grandfather and his multiracial granddaughter overseas. This is Japanese Canadian Chieri Uegaki’s third picture book for children, and it’s illustrated by Genevieve Simms.

Young Mayumi van Horton has grown up with regular visits to her grandfather’s garden in Japan—a garden created just for her. Because it’s a garden, of course, it’s a gift that doesn’t travel. And so Mayumi travels to Japan each year, where her grandfather teaches her how to tend it. When her grandfather becomes too frail to take care of the garden, and must leave his house, Mayumi must find a way to keep the gift alive for both of them.

By focusing more on the gardening rituals (rather than, say, conversations) as visual symbols of the characters’ bond, it’s harder to feel the intensity of the relationship between Mayumi and her grandfather. It’s also harder to track the signs of his physical aging that compel him to leave his house. My 11-year old commented that it took her a little while to understand why the grandfather could not take care of his garden anymore. However, the gift that Mayumi creates is a moving payoff to the quiet narrative tension of the book. 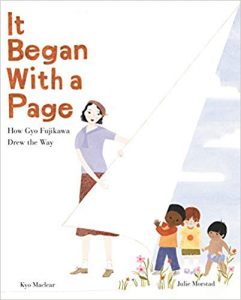 It Began With A Page: How Gyo Fujikawa Drew the Way
By Kyo Maclear, illustrated by Julie Morstad

As an Asian American child in the 1970s, I was so lucky to grow up with a dad who was a librarian. He took great care to bring home some of the best books, including as many Caldecott and Newbery award books as possible. Now that I look back some 40 years later, I see that he also sought out books with Asian and Asian American characters, which were difficult to find. But I read Yoshiko Uchida’s books very early as well as Japanese folk tales. I also grew up with Gyo Fujikawa’s A to Z Alphabet Picture Book, and grew to appreciate Ruth Asawa’s evocative sculptures as a young adult. What a delight to see not just one, but two picture books about Japanese American Nisei women artists, published in 2019. It’s wonderful to see these artists receive some of their long overdue attention, especially in the world of children’s literature.

Kyo Maclear and Julie Morstad have written other biographical picture books, including those of Julia Child and Elsa Schiaparelli. Their newest collaboration, It Began With A Page, is a tribute to Nisei author and illustrator Gyo Fujikawa. It’s a delightful book that beautifully illustrates the intersections of personal and political that seemed to be at the heart of Gyo Fujikawa’s artistic career. In a brief afterword, Maclear and Morstad cite their love of Fujikawa’s work as mothers and as artists, and provide a longer timeline of biographical events.

The book begins with the artist as a child, listening to her mother’s dinner time conversations and drawing in her spare time. My favorite illustration in one spread is a sea of sketches including a line drawing of Fujikawa as a young girl reading Goethe’s Theory of Colour. The text quickly moves to Fujikawa’s sense of racial identity as a young girl: the sense of isolation she felt at school, and the sense of community she experienced after moving to Terminal Island with a mainly Japanese American population. It’s beautiful to see her journeys through art school and then in Japan.

The book then moves to a sensitive and brief portrayal of Fujikawa’s family being incarcerated during World War II and the impact their treatment had on the artist herself.

After the war, the artist concludes with Fujikawa’s breakthrough book, Babies (1963), illustrating multiracial babies despite societal conventions—and her publisher’s initial reluctance—and its success. Morstad illustrates the babies as if they are turning the page and peeking through from the next page.

Morstad‘s winning illustrations are a combination of pen-and-ink drawings and watercolor/collage. They’re a special star of the book. The pen and ink drawings are reminiscent of Miné Okubo’s Citizen 13660, with evocative facial expressions that speak powerfully. The watercolor/collage illustrations are exuberant and joyful, reflecting Fujikawa’s indomitable artistic spirit and yearning towards creation. Morstad’s portrayals of Nikkei faces and settings also deserve praise—they are respectfully accurate, showing diversity within a community without resorting to stereotypes (such as overly slanted eyes) that illustrators of the past have used for Asian faces.

The creators’ treatment of Fujikawa’s life and art was so delightful, in fact, that my 11-year old daughter clapped when she finished reading the book. High praise indeed. 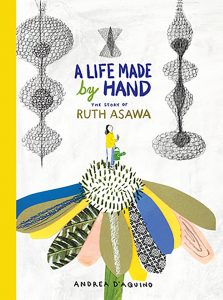 A Life Made By Hand: The Story of Ruth Asawa
By Andrea D’Aquino

Andrea D’Aquino’s A Life Made By Hand covers the artistic influences of noted sculptor Ruth Asawa. It’s more of a tribute to Asawa’s artistic career expressed through collages and less of a biography. We learn about Asawa’s early childhood influences and the kinds of questions she may have asked about the wings of a dragonfly or the architecture of a spider’s web. We also see the influences that artists Merce Cunningham, Josef Albers and Buckminster Fuller (also Asawa’s teacher) would have had on her work. The green, blue, and yellow color palette of the illustrations pay tribute to Asawa’s influences from nature, and make a striking contrast to the black wire sculptures that appear later in the book, when Asawa begins to make the sculptures for which she was primarily known.

In a brief afterword, D’Aquino explains that she worked with Asawa’s daughters in order to develop this book. Their preference for emphasizing Asawa’s artistic career to the exclusion of her family history of wartime incarceration makes for a striking omission in the book itself. D’Aquino does explain that history briefly in that afterword as well.

The difficulty, with this preference perhaps, is that a discussion of artistic influences (even visual ones) does not necessarily make for the most successful plot of a picture book, with the genre’s emphasis on a single character wanting something.

The absence of major conflicts in Asawa’s life mean that the arc of the book’s “events” feels somewhat flat. For example, how could Asawa’s life in camp (and its aftermath) have influenced her artistic choices? She met several Disney illustrators in camp, which furthered her career.

As a Japanese American woman in an interracial marriage after World War II, how was she able to gain artistic recognition and have her work end up in museums? How did she maintain, as the Afterword asserts, a “joyful spirit,” in the midst of these obstacles? Answering any one of these questions that might have lent a richer texture to the narrative arc of the book.

However, those interested in Asawa’s art and need an introduction to her career will find it a useful place to start.