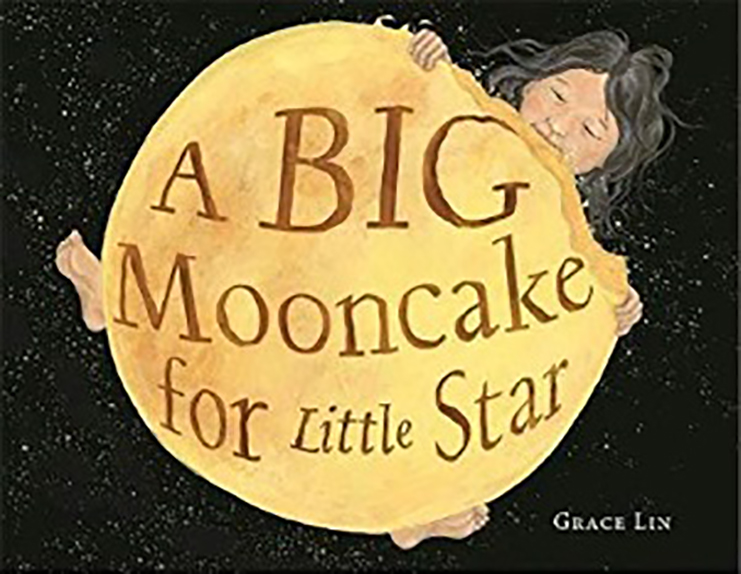 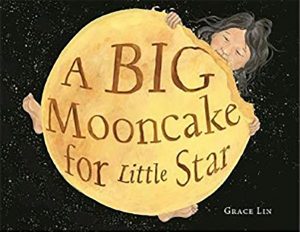 In A Big Mooncake for Little Star by Grace Lin, Little Star loves doing special things, like baking, with her mama. Soon it will be the Harvest Moon Festival and they have been making a large mooncake – so big and delicious Little Star can hardly resist. She can’t wait to chomp into its golden deliciousness. That night, her mama asks her to stay away from the cake and she had every intention to heed her. Little Star goes through the routine of getting ready for bed.

But just like any preschooler who doesn’t understand self-regulation, Little Star gives in to the munchies when nobody’s looking. She pads through the universe. Furthermore, she leaves a trail of stardust after her snack. Will she be caught by her mama?

Speaking to young, strong Chinese girls, Grace Lin gives a nod to “The Seven Chinese Daughters,” – to lend strength. Little Star will need it if she is going to trek through the night sky. There is symbolism at work – what is the role of her companion, a floppy white rabbit? Although, Lin claims there is no relationship between Chinese mythology and her book, one might believe it snuck its way in. Little Star, sneaking through the Milky Way with the rabbit would inevitably leave unintended, trackable crumbs.

Depicted are the 12 phases of the moon. Little Star chomps down on the moon twelve times – it’s all fitting. The reader might ask: why did Lin choose twelve phases instead of eight phases of the moon? Additionally, it’s vague whether there were lessons to be learned. If so, they weren’t meant to be driven but harvested – being full means turning to something new, regeneration and coming full circle. Little Star’s mama doesn’t scold; she approves. Maybe punishment is not needed. The universe that Little Star inhabits runs on magical realism.

Fans of Lin’s previous book Round is a Mooncake will enjoy this new book. Create your own traditions around the Harvest Moon. The best part about A Big Mooncake for Little Star is its versatility. Why not celebrate Harvest Moon, read a bedtime story to your little ones and enjoy some cake? Use it for story time – it is the perfect length for toddlers (12 to 36 months).