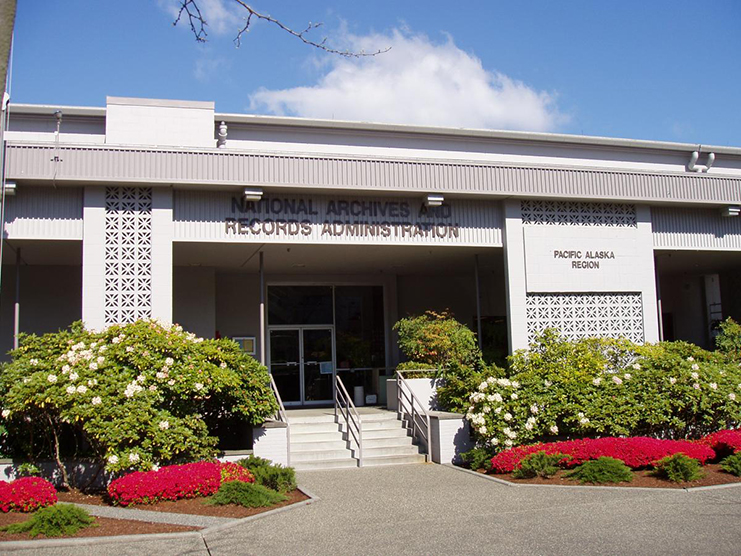 The National Archives in Seattle is under threat. For a year now, the federal government has planned to sell the facility to a real estate developer, but at the end of 2020, the federal Public Buildings Reform Board (PBRB) escalated the threat with a plan to quickly sell it in early 2021.

Washington Attorney General Bob Ferguson, joined by 40 tribes, the state of Oregon, and nine museums and historic preservation societies, is suing the federal government in an effort to stop the sale. The coalition alleges that the federal government neglected the importance of the records for the Northwest, failed to follow requirements to consult with tribes, and that the facility is exempt from sale under the Federal Assets Sale and Transfer Act, because it is a federal property used for “research in connection with federal agricultural, recreational or conservation programs.”

On January 8, the coalition filed a motion for a preliminary injunction in U.S. District Court to stop the sale.

If sold, the records would be shipped to facilities in Missouri and southern California. Only a tiny fraction of them are available digitally.

Last year, historian Marie Wong warned that shipping the records away would “completely gut” opportunities for scholars of AAPI history and more in the Pacific Northwest and Alaska. “We lose the ability to access that knowledge,” Wong said. That is absolutely priceless.”

Supporting the motion are 79 declarations from historians, researchers, tribal leaders and Asian Pacific Islander leaders testifying to the importance of the archives for local history.

The archives contain federal records from Washington, Oregon, Idaho and Alaska, including some 50,000 case files relating to the Chinese Exclusion Act, records related to incarceration of Japanese Americans during WWII, numerous tribal records, and more.

Because Chinese immigrants entering the U.S. during the exclusion period were interrogated by the Immigration and Naturalization Service (INS), the transcripts and photos are stored in the archives, and reveal details about what life was like for Chinese immigrants across the country.

The Chinese Exclusion Act is not yet a required part of Washington’s State K-12 curriculum. The Chinese American Citizens Alliance of Seattle is working to change this, its president Catherine Lee wrote in a declaration included in the motion — but this would become difficult if the records are moved.

Longtime journalist Frank Abe wrote in his declaration supporting the lawsuit that he relied on the archives – particularly records from the U.S. Bureau of Prisons – to write his 2018 biography John Okada: The Life and Rediscovered Work of the Author of No-No Boy, and an upcoming graphic novel We Hereby Refuse: Japanese American Resistance to Wartime Incarceration.

Veta R. Schlimgen, Associate Professor at Gonzaga University, who researches Filipinx history in the Western United States, wrote in a declaration that the archives in Sand Point provide valuable details about the stories of Filipino immigrants, and migrants from the whole Pacific region, across Oceania and Asia, to the Northwest.

Bif Brigman, Seattle historian and member of the Minidoka Pilgrimage Planning Committee, wrote in a declaration that the archives contain records of anti-Asian organizing by Washington business owners, and documents about the early Japanese community in the Northwest. “The connections made there, and the opportunities to share and transfer knowledge preserved in the facility’s records, is immense and cannot be replaced,” Brigman wrote. “The damage this will cause to the Chinese and Japanese American communities in the Pacific Northwest cannot be overstated.”