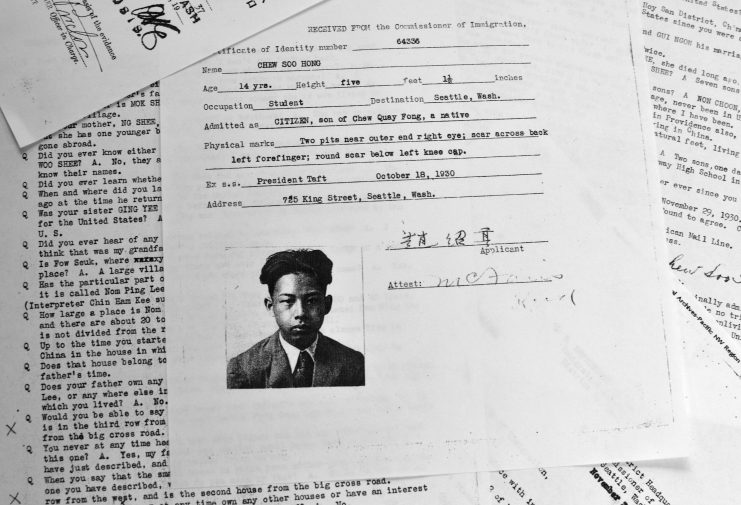 When he was growing up, Ron Chew’s parents didn’t talk much about their family history, for fear of immigration officials. Chew’s father was admitted to the United States from China in 1930 at age 13, the son of an American citizen, at a time when the Chinese Exclusion Act barred Chinese laborers from entering the United States.

Chew, executive director of the International Community Health Services (ICHS) Foundation (and Board President of the International Examiner), found a wealth of details about his father, grandfather and uncles when he examined their records in the National Archives in Seattle.

Encompassing 10 acres of warehouses in Sand Point, the Seattle National Archives contains some 50,000 case files relating to the Chinese Exclusion Act. Whenever Chinese immigrants entered the U.S. during this period, they were interrogated by the Immigration and Naturalization Service (INS). The resulting transcripts of interrogations, and photos, eventually archived in Sand Point, reveal details about life for Chinese immigrants, where they came from, where they were going.

“It’s all there on paper, so you can literally re-create a picture of the village and the family tree through these documents,” Chew said. With the help of the files, Chew pieced together his family story, and eventually visited his father’s village in 2008. “This history really belongs in the area, so that descendants can have access to that information,” Chew said.

But those who want to delve into primary sources relating to Chinese exclusion were dealt a blow after the revelation last month that the federal government plans to to move the National Archives in Seattle to facilities in Kansas City, Missouri and Riverside, California.

The U.S. Office of Management and the Budget announced on January 24 that the facility in Sand Point would close, following a vote from the five-member Public Buildings Reform Board, which was created in 2016 to identify federal properties deemed “excess.” The Board found the 10-acre warehouse site, originally built by the Navy in the 1940s, to be a “high value asset,” My Northwest reported. The Board noted the land’s potential value for housing development.

The Board also concluded in late December that the facility had a maintenance backlog costing $2.5 million, and costs $357,000 per year to operate and maintain, the Seattle Times reported.

In all, the facility contains about a million boxes of federal records dating back to the 1840s from Washington, Idaho, Oregon and Alaska. The records are open to the public, and used by historians, family genealogists, writers and students. Only a tiny fraction of them are digitized or available online, because digitizing such files is complex and time-consuming, said Susan Karren, director of the Seattle facility.

Shipping the records away would “completely gut” opportunities for scholars in the Pacific Northwest, Alaska, and even California to do historical research, said Marie Wong, historian and Professor Emerita at Seattle University. “We lose the ability to access that knowledge. That is absolutely priceless,” Wong said.

The files detail the precise locations immigrants were headed when they entered the United States, which was usually through ports in Seattle of San Francisco, Wong said. “They tell you a lot about migration across the United States.”

Wong said the archives made it possible to research and write her books, most recently Building Tradition, about the history of Seattle’s residential hotels in the Chinatown International District. With the help of a map found in an immigration file, Wong discovered the location of the first Chinese settlement in Seattle, a question of much speculation.

Karren oversaw the transfer of the Exclusion Act records from the INS building to the National Archives in Seattle, which made them available to the public. Since 1992, volunteers have been indexing the files, making them easier to navigate.

Over the years, Karren has been present with many people when they looked through the Exclusion Act files for the first time to learn about family history. Sometimes, it would be a person’s first time seeing a photo of their parent or grandparent when they were young, learning what they went through to get to the United States. Sometimes it’s people that were known only from stories. “They’re seeing the person, they’re hearing their story, they’re hearing their voice, in the form of the interrogations, for the first time,” Karren said. “There have literally been times when I’ve reached over, taken the file out from underneath them, handed them a box of Kleenex. You don’t want the records getting wet from tears.”

There is currently no date set for closing the facility, and the process for closing would take 18 months, according to a statement from the National Archives Public and Media Communications Staff in Washington, D.C.

Diane Rodill is writing a historical biography of her father, who arrived in Seattle from the Philippines in 1908 as a teenage runaway. She used the National Archives in Seattle extensively in her research, and received a great deal of help from the staff there. “I will forever be grateful to them, because they taught me how to research better, they taught me where to look, how to look,” Rodill said.

With the help of staff at the Archives, she was able to find out details about the ship her father arrived on, key information about his years spent living in Philadelphia. A member of the staff helped her realize that the reason her father never had children with his first wife, a white woman, was because “she didn’t want brown babies,” Rodill said. “And of course a light bulb went off.”

“If indeed they close, anyone else who wants to do what I did, it will be much, much more difficult,” Rodill said.

While most archives related to Japanese American incarceration are in Washington D.C., the Archives in Sand Point has publicly-accessible databases where people can access some of these files, Karren said.

Caitlin Oiye Coon, Digital Archivist for Densho — which preserves and shares the history of WWII incarceration of Japanese Americans — said the closure would impair Densho’s efforts to help Japanese American families research their roots through genealogy. “Any historical records can add vital information to the history of incarceration, or really any history,” Oiye Coon wrote in an email. “As a community-based heritage organization, we believe that communities should have access to their own history.”

For historians in Alaska, the closure would rub salt in wounds. The National Archives in Anchorage were closed in 2016, and transferred to Seattle. For Alaska historian Anjuli Grantham, the closure “speaks to the fading likelihood that Alaskans will have access to our own federal history if it’s moved ever farther away,” she wrote in an email. “This is a real concern since most of our governmental records before 1959 are federal records.”

A letter sent to the Office of Management and the Budget by all senators from Washington, Alaska, Oregon and Idaho, and eight of the 10 Washington state representatives in Congress, decried the planned closure.

Local tribes including the Muckleshoot, Puyallup and Port Gamble S’Klallam tribes were not consulted, and have condemned the closure. The Sand Point archives includes tribal and treaty records.

Washington Attorney General Bob Ferguson is considering legal action, and plans to look at whether the government neglected to take necessary procedural steps, My Northwest reported.

Wong sees parallels between the decision to close the archives and the Chinese Exclusion Act itself; “A bad decision by the federal government,” made by people mostly in Washington D.C. “who really aren’t invested in what’s happening with the west coast.”

A visit to the Archives when she was working on her dissertation at the University of Washington put Wong face to face with records related to Chinese immigration. Haunting portraits of immigrants who were arrested and incarcerated kept her up at night. Wong credits the visit for helping steer her career toward scholarship on the history of Chinese, Japanese and Filipino communities in the United States.

“There is a tactile experience of picking up a file and looking through it and realizing that you are probably the only person who’s ever seen those records since they were first created in the late 1800s,” Wong said. “And if that’s not a staggering experience, I really don’t know what is.”