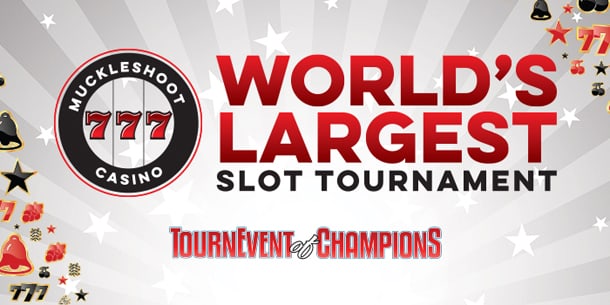 Muckleshoot Casino in Auburn, Washington will mark its 21st anniversary with a celebration aimed at being one for the record books. On April 30, beginning at 8:00 a.m. the casino known as the “Biggest and Best in the Northwest” will attempt to host the world’s largest slot tournament. To claim the designation, more than 3,001 participants must take part. An official Guiness World Records representative will be on-site to validate the achievement.

Participation is free to everyone 21 years of age and older. More than $100,000 in cash and prizes will be awarded to participants who are each guaranteed to win at least $21 in Free Play. The top finisher at Muckleshoot Casino’s April 30 event will receive $21,000 in cash and a four-night trip to Las Vegas to compete for a chance to win $1 million in Everi’s national TournEvent of Champions championship event on September 28, 2016.

The attempt at the world’s largest slot tournament will mark the culmination of Muckleshoot Casino’s landmark 21st anniversary celebration.