Rick Barot was born in the Philippines, grew up in the San Francisco Bay Area, and attended Wesleyan University and The Writers’ Workshop at the University of Iowa. He is the author of three books of poems, The Darker Fall (2002), winner of the Kathryn A. Morton Prize; Want (2008), winner of the 2009 Grub Street Book Prize; and, most recently, Chord (2015).

Chord, Barot’s latest collection of poems, is such an affecting and well-regarded book that it won the prestigious PEN Open Book Award for a Distinguished Work by an Author of Color as this review was in progress, adding to Barot’s recent accolades—a 2016 University of North Texas Rilke Prize and a 2016 Guggenheim Fellowship, among many others.

If accolades are any indication, Chord is a book and Rick Barot a poet to recommend to all readers.

Folks in the greater Seattle area will recognize some of the landscapes and allusions throughout Chord—there are poems entitled “Tacoma Lyric,” and “Coast Starlight”—as Barot is a “local” poet who lives in Tacoma, teaching at Pacific Lutheran University and directing the Rainier Writing Workshop, the low-residency MFA in Creative Writing at PLU. However, I hover around the word “local” as Barot’s poems vibrate with a wider breadth, reaching toward something global, claiming space beyond this corner of the world.

Rick Barot’s poems are scrupulous and patient; his language is accessible and precise, creating vivid imagery and syntax that is supple and incisive, initiating the reader into thoughtful meditation as well as tender and fierce questioning.

I have seen the black sheets laid out like carpets
under the trees, catching the rain

of olives as they fell. Also the cerulean brightness
of the one covering the bad roof

of a neighbor’s shed, the color the only color
inside the winter’s weeks.

The poem continues this catalog—tarps covering a pile of bricks, the back of a truck, people asleep under bridges—until the speaker asserts:

…what I have in my mind isn’t the thing
itself, but the category of belief that sees the thing

as shelter for what is beneath it.
There is no shelter. You cannot put a tarp over

oil well miles under the ocean.
There is no tarp for that raging figure in the mind

that sits in a corner and shreds receipts
and newspapers. There is no tarp for dread,

whose only recourse is language
so approximate it hardly means what it means:

He is not here. She is sick. She cannot remember
her name. He is old. He is ashamed. 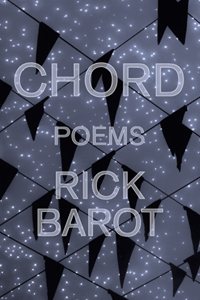 In Chord, a catalog of tarps leads to a meditation on the failures of care and the failures of language; a garden of only-white flowers unfolds into an etymological interrogation of empire and the legacies of colonialism, historical and personal; a pondering on the difference between a detail and an image becomes an elegy for an uncle.

Here is a poet who revels in all the potential around him, searching for, questioning, and finding meaning through astute observation and a facility with reading the world. Barot excels in rendering associative leaps—bringing together the personal and historical, the banal and sublime—with a precision that might be a stretch for poets less fastidious and patient. In Barot’s hands, these distances become tensile strength, with smart and surprising juxtaposition.

Chord, is a pleasingly apt title for Barot’s collection: a chord being a group of notes sounded together as a basis for harmony, along with the idiomatic phrase, “to strike (or touch) a chord,” meaning to affect or stir one’s emotions. These poems deliver, ringing notes that linger and sing. These chords are not always euphonious—that is to say, Barot does not shy away from the difficult or unpleasant—but, they are always thought-provoking and finely wrought.

In that spirit, to close, I’ll simply share pieces of poems from the collection (a difficult task as I’d like to quote everything!), letting the beautiful and moving music of Chord strike on its own:

“[What] I want is to be outside / of us, to be able to read us not as we are / but as figures without story, without ending.”

“What did I know that my parents didn’t give me? / Even the house-shaking storm / seemed one more event of their conjuring, / our house a crystal globe in the conjuring dark.”

“Chord that is your satin purple dress, love’s good synesthesia.”

“Chord that is a photograph of you among tulips, the field now no field.”

“Chord that is your throat, its Sunday hymns unabashed, unstricken.”