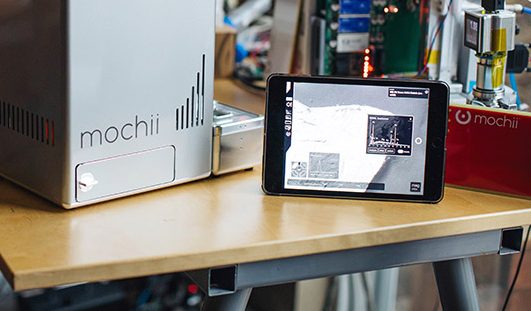 Like other technology companies, Christopher Own’s company Voxa started in a garage. Voxa is a Seattle-based startup that creates accessible nano-scale measurement and analysis instruments to explore the Earth and space at the smallest length scales.

Voxa’s Mochii electron microscope was sent into orbit in 2020 on the Northrop Grumman’s Cygnus cargo capsule. Mochii is the size of a coffee maker and is controlled by an iPad. It allows astronauts to examine samples in space while scientists on Earth can remotely operate the microscope and review the data at the same time.

Before Mochii, astronauts would send samples to Earth to be examined. Own said sending an item to Earth would often take as long as six months and risk complications like the sample evolving during the journey, or reacting differently to gravity before it could be analyzed. Mochii solves this dilemma by giving direct results “in situ” or at the time and place of discovery.

Mochii was most recently used by astronauts Kayla Baron and Matthias Maurer who used it to scan samples like a Martian meteorite. They said the Mochii provided a bright future for present and future space missions. Mochii operates on the International Space Station as the Mochii ISS National Laboratory (ISS-NL), and has been able to do so with help from the Small Business Innovation Research program (SBIR).

“We’re really proud of being a tiny company that had very limited resources and have the benefit of SBIR support to help us make this product a reality,” Own said.

The SBIR and Small Business Technology Transfer (STTR) programs allow small businesses to showcase their research and development for the opportunity to commercialize with the aid of the U.S. government through monetary means.

The goals of the program are to grow technological innovation, meet Federal research and development needs, encourage participation by marginalized groups and increase private commercialization of small businesses.

The SBIR program has three phases. Voxa was awarded $125,000 from Phase I which is the trial phase of the program that seeks proof of concept. Awards range from $50,000 to $250,000 for six months for the SBIR program, or one year for the STTR program.

Phase II continues the research and development of Phase I, with funding based on achievements from the primary phase. Usually, only businesses awarded the Phase I grant are eligible for this phase, and awards are $750,000 for two years.

Phase III looks for commercialization, following the research and development stages of the first two phases. This phase is not funded.

According to Own, the SBIR program did well to support Voxa in allowing its conceptual ideas off the ground. He recommends for other small businesses interested in applying for the program to ensure their products or businesses have a clear impact and fill a market need.

Another thing Own stresses is perseverance throughout the application process since Voxa needed to apply for the program twice to be accepted.

He applied in 2016 and again until his proposal was approved in 2017. He said during his application, there were 1,600 submissions from small businesses nationally, and fewer than  only 400 projects were selected.

“We were one of these projects that is a high-risk, high reward type of SBIR projects, but we went through and we executed on it, and we’re successful in delivering the results [to NASA] on that SBIR,” Own said.

From there, Own was able to continue developing Mochii and garnered interest from multiple divisions in NASA and from Japan where he created a spaceflight version of Mochii and it went into orbit in 2020 to serve the American public.

Mochii is in use on Earth at the NASA Johnson Space Center in Houston, Texas, a local middle school, in Thailand analyzing soil samples, as well as at the bottom of the ocean and other places around the world.

Mochii followed the classic phases of being a concept from research and development into commercialization through the assistance of the SBIR program. It is now part of the backbone of about a dozen core facilities that the International Space Station offers the international public for microgravity research.

The SBIR program also supported some of the platform technology that helped to produce Voxa’s Blade product line,which is helping to map the human brain. Own said Voxa is interested in participating in the upcoming SBIR programs for the Artemis project, which looks to support sending a team of female astronauts to the moon, as well as support future analysis of minerals on the surface of Mars.

“The technology that was aided by government funds actually have direct returns in the success of a product that people can use on Earth,” Own said. “You can now purchase a Mochii on Earth that’s basically the same as the one that’s on the space station. That’s a great example of trickle down technology.”