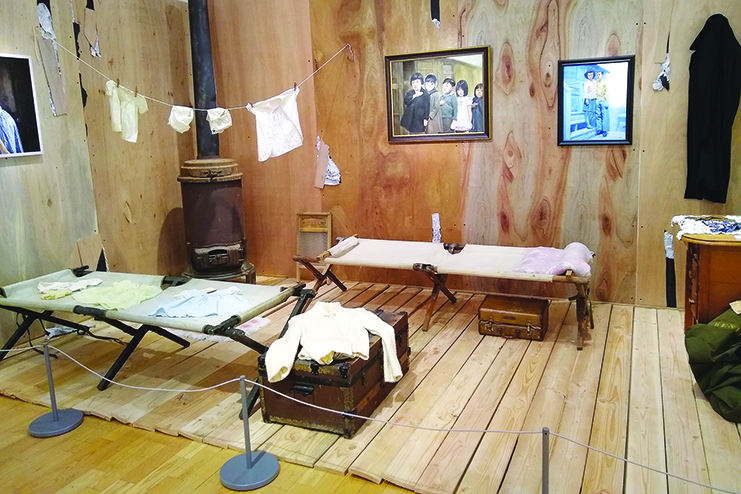 Bainbridge Island Museum of Art (BIMA) currently houses Jan and Chris Hopkins’ exhibition memorializing the mass incarceration of Japanese Americans during WWII. Put into action by Franklin Roosevelt on February 19, 1942, E.O. 9066 ordered the forced relocation of over 120,000 Japanese American grandparents, adults and children under the supposed “threat” of the community being spies. In reality, our heritage was weaponized against us by the U.S. government as a convenient way to get rid of Japanese Americans: a sentiment that manifested long before the war.

Walking through the exhibit, you pass informative panels, paintings, drawings and many three-dimensional pieces. No piece is like the other; there is a piece that hangs from the ceiling, there are genuine artifacts, each carefully and intentionally placed, and pieces made of non-traditional material like fruit skins and leaves.

Jan Hopkins, the artist behind the inspiring exhibit, has done basketry and other work with three-dimensional pieces that center around resourcefulness. As per the “About the Artist” description at the museum, Hopkins says, “Experimenting and using materials that are thought of as mundane and unusable is an adventure that I am addicted to.” Her work on the Japanese American incarceration, however, is framed in a narrative style of art that caters to the necessity to tell a non-fiction historical story.

What clearly sticks out about this exhibit are the visceral reactions Jan and Chris evoke through their work. Whether you are well-informed about the racism and dehumanization of the incarceration or have not yet learned about the atrocities of the American government, this exhibit holistically captures the effects of this traumatic time in our history on our community.

One exhibit caught my eye right as I walked in: Spellbound—The Power of Words. This piece is made of cantaloupe peel rope and is shaped into what looks like a human torso with words written in pretty cursive on top of words written in less-pretty capital letters. It encompasses the intergenerational trauma that the community had to endure after the camps were closed. The cursive words, terminology from the “Power of Words Handbook—A Guide to Language about Japanese Americans in WWII—Understanding Euphemisms and Preferred Terminology,” represent the euphemisms that have been adopted to cover up the truth behind what happened to the Japanese Americans and why they were forcibly removed from their homes. Our words form our thoughts, and our thoughts push our actions. We are literally spell-bound to our rhetoric.

Hopkins’ exhibit, from its real wartime artifacts to its paintings and three-dimensional pieces, encapsulates the experience of the camps and forced displacement across generations. Bainbridge Island, the site from which the first community in the country was removed to concentration camps, has a rich and heartbreaking history. Hopkins has participated in the instrumental process of preserving and displaying this history for others to see and hopefully brings about a perspective on our current political climate that scarily parallels that of over 80 years ago.

Americans Incarcerated: A Family’s Story of Social Injustice, a collaboration between Jan and Chris Hopkins is on view through June 12, 2022. The Bainbridge Museum of Art  is located at 550 Winslow Way E., a few blocks from the ferry. Free admission. Open daily from 10 AM – 5 PM.  [email protected].