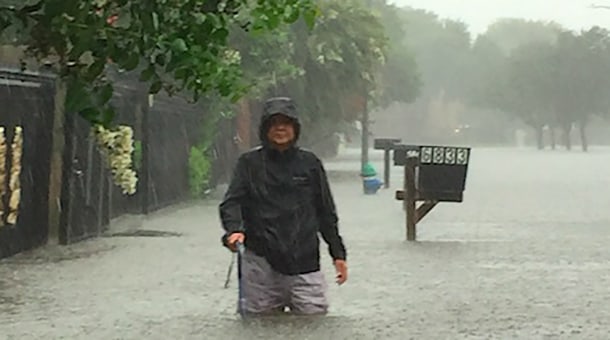 Editor’s Note: Thanh-Thuy Vu is owner of Saigon Radio KREH 900-AM, the only full-service, full-time Asian station in Greater Houston. For the city’s nearly 40,000 Vietnamese residents, and for many more in Greater Houston, the station is a central hub for news and information and is now playing a central role in helping to direct rescue efforts amid the devastation of Hurricane Harvey. NAM Editor Andrew Lam interviewed Vu about how the station is weathering the storm. Below is a translation from the original Vietnamese.

How is the Vietnamese community responding to Harvey?

There are many Vietnamese in Houston, and many of them own boats. People live near lakes and near the ocean so a lot of them fish on the weekends and have boats at the ready. Many are volunteering to help rescue others, from as far as Dallas, New Orleans and other cities. There was a Vietnamese man from Dallas. He called our station. He bought a boat on Friday. By Saturday, he was already in Houston to help rescue people. It was quite amazing!

Vietnamese restaurants are also providing food, while churches and temples are open for anyone seeking shelter. Volunteers are coming with food and clothes. They cook. They clean. They bring diapers and baby formula. Vietnamese are showing up at the George Brown Convention center to cook Vietnamese food for everyone taking shelter there.  And now, as the water is receding in some areas, volunteers are organizing to clean up.

What is the role of Saigon Radio in times of emergency like this?

People have been listening to our broadcast and when they hear a call for help, they use their jet skis and their boats to go help. Many of our listeners don’t speak English well, so we give them information they may not have. We tell them where the shelters nearest to them are. We also direct volunteers to those shelters or to certain addresses, as there are elder Vietnamese who are stuck.

During Katrina, Houston’s Vietnamese community played a big role in helping the displaced. How are those lessons being applied now?

Katrina was a disaster for everyone, but it was also a lesson in preparedness. There was a lot more discipline and less panic this time as compared to what happened in New Orleans. As an example, city officials here allowed the release of water from the reservoirs, which initially upset a lot of people who own nice homes that were certain to be flooded. But eventually people realized it was necessary to avoid collapse of the dam and to give people time to evacuate.

A post from Phuong Michelle Nguyen on the Vietnamese Community Facebook page in Houston, showing the interior of Lien Hoa Bhuddhist temple and its hurricane relief efforts.

How else has Harvey been different from Katrina?

Social media is playing such a strong role in rescue efforts. People are asking for help online, and others are responding. Vietnamese are using Twitter and Facebook to help each other, and they share a lot of that information with us as well. People write in asking to be rescued, or they provide video and images of their neighborhoods. Others have shared maps of streets that are not flooded and how to get out from certain sectors of the city.

Thanh Nguyen posted on the Houston Vietnamese community facebook page images of his vandalized nail salon during the worst of Hurricane Harvey.

How have you weathered this disaster? And how is the station?

We are trying our best. We are so glad to be operating again. My house is ok but the street further down is flooded. We had to walk to work in water up to our waist to get on the air. The station is just across the street from our house, a 3-minute walk that now takes 20-minutes in water. But we are among the fortunate ones; many others saw their homes and cars totally flooded. Today the station is back on and people are calling in quite a bit: They are so happy to hear from us. They need information.

Danny Nguyen posted on the Houston Vietnamese community facebook page image of a submerged car and instructions on what to do if caught in such a situation.