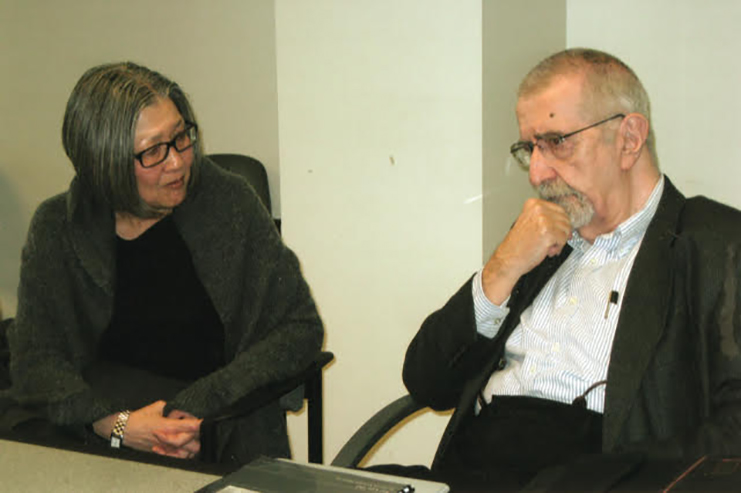 It wasn’t until February 2010 that we met, at a 3-day Tule Lake planning meeting in Oakland, organized by the NPS. Participants included NPS staff, Tule Lake Committee representatives, and historians Don Hata and Roger Daniels. Our task was to create the Foundational documents to guide NPS’ interpretation of the new site, then called the Tule Lake unit, which was in 2019 renamed the Tule Lake National Monument.

As a writer and researcher consumed by Tule Lake and its stories of protest, I looked forward to working with NPS and the legendary Roger Daniels, who I assumed would have a nuanced view of Tule Lake’s long-demonized protesters, individuals who took enormous risks to speak out against the government’s injustice. However, from the beginning, rather than a meeting filled with affinity and rapport, I was alarmed to find myself in multiple arguments with Roger over his characterizations of events at Tule Lake.

During an afternoon break as we stood in a coffee queue, he expressed his views on Tule Lake’s dissidents. “There were no heroes,” he snarled, “Don’t romanticize the story.” Regarding the protests at Tule Lake, “This is not about civil rights.”

I left Oakland fuming about Roger’s involvement in planning the interpretation for Tule Lake. And, I worried about us arguing about Tule Lake’s protesters being defined as “disloyal” because they challenged the government’s abuses. I feared the revered professor would be our biggest adversary in trying to strip away government propaganda and racial stereotypes warping how we think about Tule Lake’s dissidents.

A year after those fraught NPS meetings, Roger sent a message asking me to call him. He picked up the phone and got right to the point, abruptly announcing, “I’ve changed my mind about Tule Lake.” I was stunned. He then suggested that we co-author a book about Tule Lake, and I wondered aloud if he was sure about that.

It wasn’t until Roger sent me his hot-off the presses 2013 book, “The Japanese American Cases,” that I realized I was dealing with a person of radical integrity and courage. While reading his chapter on Tule Lake’s renunciants and Abo v. Clark, I burst out in tears, overwhelmed with the dramatic turn in Roger’s interpretation of Tule Lake. Not only did he “get it,” the seminal scholar of the Japanese American incarceration applied his reputation and deep knowledge and skills to begin the work of revising Tule Lake’s warped historical narrative.

Roger suggested the title for our book on Tule Lake: “America’s Worst Concentration Camp,” a project that has continued over the past seven years, encouraged and promoted by another of Tule Lake’s key advocates, Lane Hirabayashi, who Chaired UCLA’s Asian American Studies Department, but succumbed to cancer in August 2020. Lane underwrote and organized multiple community programs to re-visit Tule Lake’s dissidents and to correct and address euphemistic terminology, generously creating opportunities for Roger and me to focus public and academic attention toward correcting terminology and Tule Lake’s interpretation.

The community dialogues on terminology promoted wider discussion and encouraged the NPS, the JACL and the AP Stylebook used by newsroom editors, to understand and accept terminology that for decades, Roger had advocated for along with other Nisei activists, including Lane’s father Jim Hirabayashi, Aiko Herzig-Yoshinaga, Mako Nakagawa, Sue Embrey and Ray Okamura. See their papers here: https://www.nps.gov/tule/learn/education/suggestedreading.htm

In 2019, Lane organized his last program for UCLA’s Suyama Program, an event in Sacramento carried out by his successor, Karen Umemoto, to showcase Roger’s and my work on Tule Lake. An overflow crowd filled Sacramento’s Betsuin to hear Roger’s lecture about Tule Lake’s dissidents. As it turned out, this was Roger’s last large engagement. He relished it and looked forward to doing more, but just a few months later, Covid changed everything. Highlights are posted on UCLA’s Suyama website: https://www.suyamaproject.org/

Roger remained the ever-questioning, sharply incisive historian to the end, recognizing errors of interpretation in Tule Lake’s propaganda-laden history, and spending the last years of his life working to correct them. That willingness to revisit his lifetime of work to reconsider Tule Lake’s story was an act of rare humility and integrity, and ensures that the stories of government misconduct and of audacious, resolute Issei and Nisei who resisted unjust authority will be excavated, reinterpreted and preserved for future generations.

Barbara Takei is a Detroit-born Sansei whose introduction to the Asian American movement in the late 60s was Grace Lee Boggs and the Detroit Asian Political Alliance. She puzzled over the missing stories of Japanese American dissent against the unjust incarceration for decades, but it wasn’t until her first Tule Lake pilgrimage in 2000 that she realized peaceful protest during WWII was erased by demonizing it as “pro-Japan disloyalty.” For the past two decades, she has served as an officer on the non-profit Tule Lake Committee and devoted herself to preserving Tule Lake as the site of Japanese American civil rights resistance.