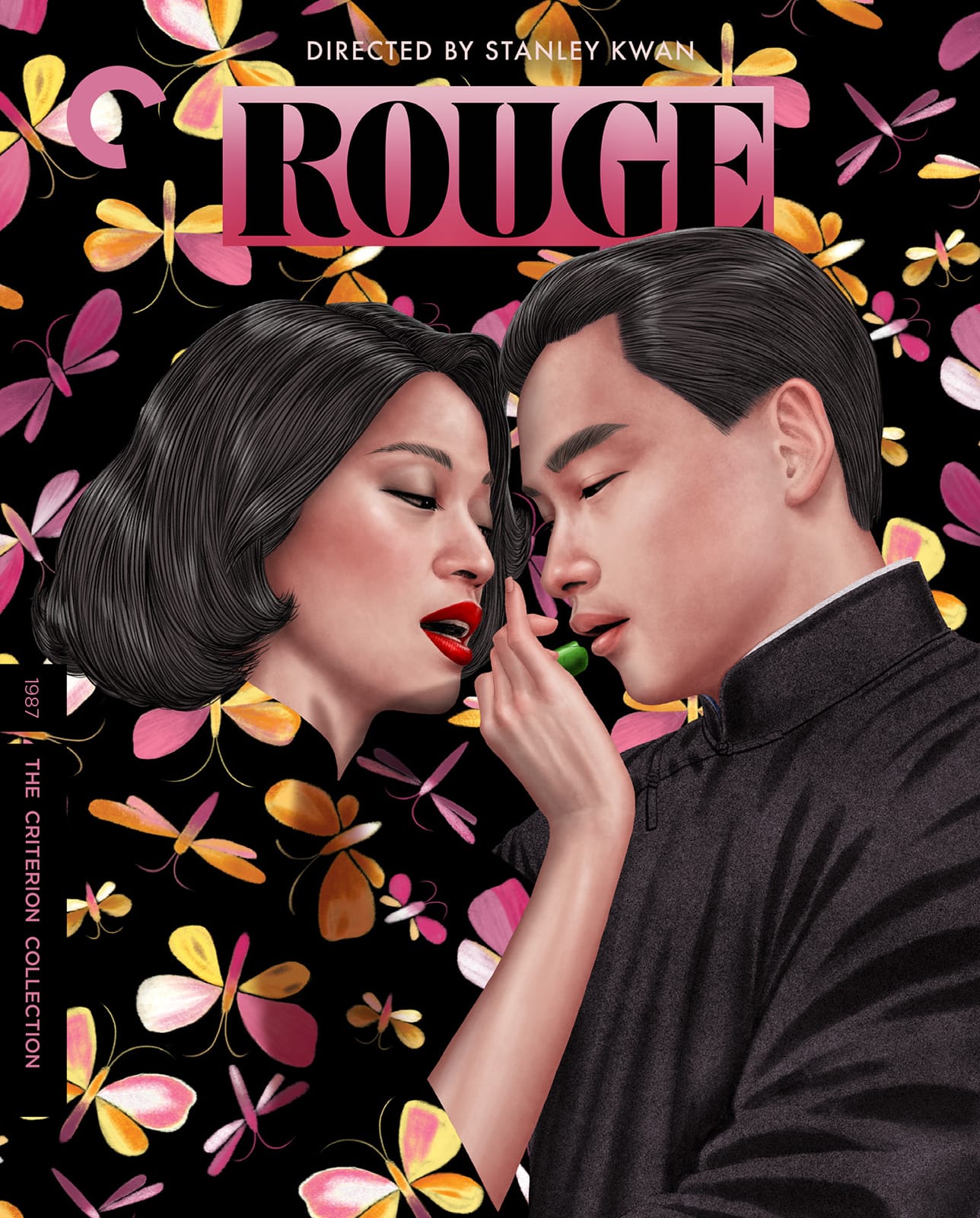 The Criterion Collection has re-released the Stanley Kwan classic, Rouge, with a 4k remaster. Set in Hong Kong in 1987, this new-wave Hong Kong film is aesthetic nostalgia for today’s viewer, in 2022—but it’s also more than that. While the present story takes place in 1987, the story it focuses on takes place in the 1930s.

The 1930s couple are played by Canto-pop legends Anita Mui and Leslie Cheung. Set in a brothel in Hong Kong’s former red light district, Shek Tong Sui, the “Twelfth Young Master” Chan (Cheung) courts a courtesan named Fleur (Mui). Though she brushes off his advances several times, he eventually wins her over, and together they begin a passionate and forbidden relationship. Intimate moments are captured through Kwan’s artful eye, as the film makes use of mirrors, cracks between open doors, a sheet of mesh fabric. Their courtship is a performance of push and pull, with Fleur negotiating whether the Twelfth Master’s devotion is true and reliable, and with Chan bending over backward to prove that he’s the real deal.

Skip to 1987, we’re introduced to a casual couple in a long term relationship. They are both journalists, and their relationship is nothing like the one between Fleur and Chan. There’s no performance to be had. In their opening scene, Yuen buys his girlfriend Shu a new pair of shoes. As she takes them to her desk to put them on, she tells him not to come any closer. “Do your feet stink?” Yuen asks her from across the room. After she leaves, he sneaks a whiff of her old pair and makes a face. This relationship is comfortable, safe, egalitarian—a far cry from flowers and opium.

Soon the two timelines collide, as Fleur, not looking a day older than her 1930s self, steps into the light to ask Yuen about placing an ad for a missing person. Eventually she reveals that she has been dead for over fifty years. She had a suicide pact with the Twelfth Master, and after carrying it out, she waited for him in the underworld. When Chan did not greet her, she eventually returned to the surface world to look for him.

While the 1980s couple, Yuen and Shu are both disturbed by Fleur’s presence, Fleur finds that the changes to the Hong Kong she knew to also be unsettling. The once decorated brothel Yi Hung, where she and Chan first met is now a kindergarten. After Yuen and Shu hear Fleur’s story, however, they become drawn to Fleur and dedicated to helping her find her long lost lover.

In some ways they admit to feeling envy toward Fleur’s love story. Shu admits to feeling envious of Fleur’s intensity and guts, her dedication to love, but also notes that Fleur is envious of the two of them, with their stable and loving relationship, envious that they have each other at all. “Would you commit suicide for me?” Yuen and Shu ask each other one night. No, they admit. They would not.

The narrative is simple, but also elegant and brilliant, using a ghost story to examine the echoing relationship between the Hong Kong of the past and the Hong Kong of the story’s present. Coming out of the tradition of Hong Kong new-wave cinema, this film is stylistically emblematic of the genre. The remastered version is captivating, gorgeous, and sometimes shocking. Rouge is a nostalgia movie about nostalgia, where memories are haloed by passion and tragedy. But “Real things are always ugly,” the movie insists, and as Yuen and Shu dig further into the mystery behind their ghostly visitor, they soon uncover what that means.