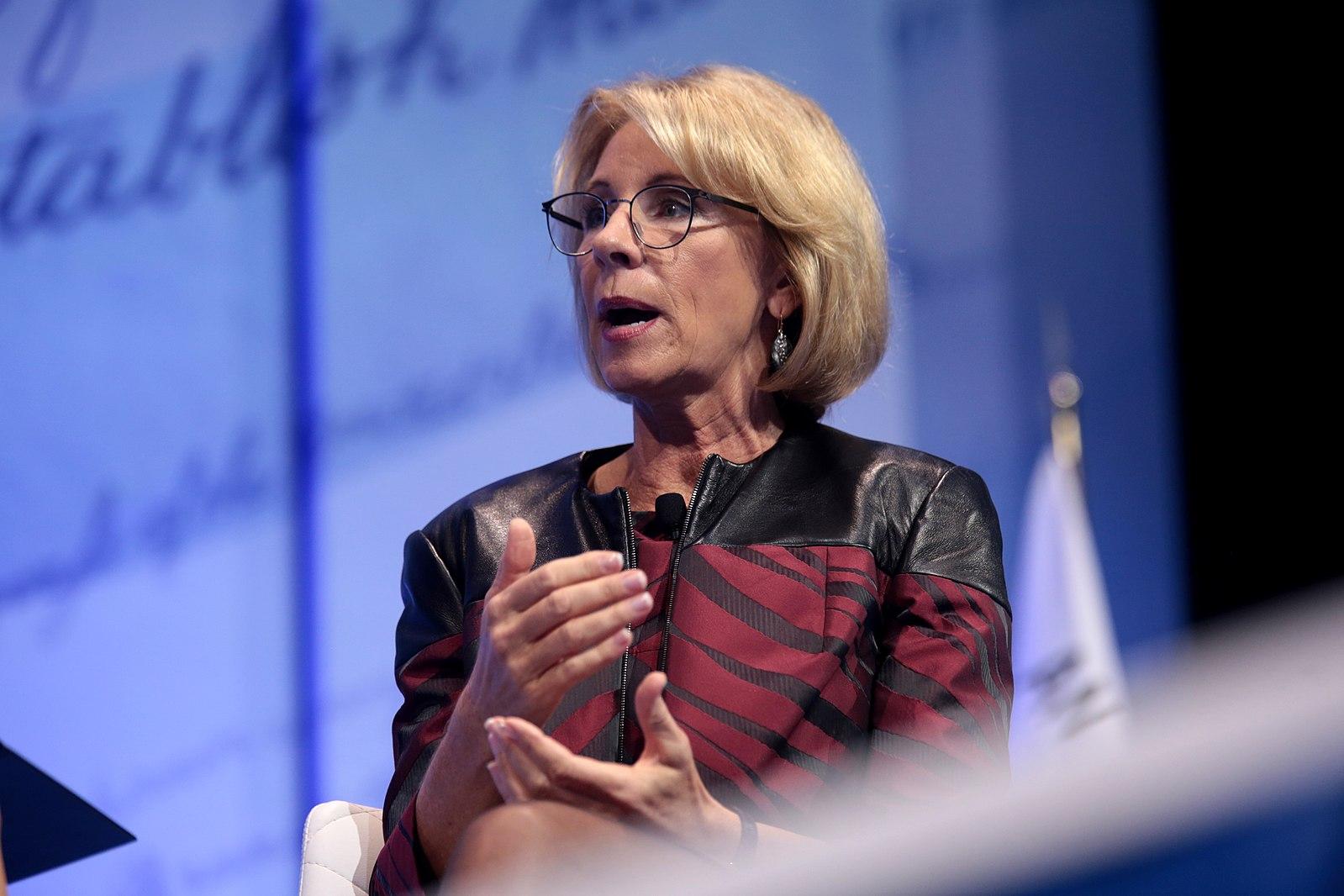 On Friday, October 13, I will be in the streets protesting Betsy DeVos, the U.S. Secretary of Education, because I believe in freedom and equal opportunity for all students, regardless of skin color. I also have experience with fascist leaders relentlessly targeting minorities, and believe DeVos’ Education Department is part and parcel of Trump’s fascist agenda.

In the Philippines, we had a President, a man who rose to power democratically, who held is seat for more than 20 years by persecuting those who disagreed with him, silencing the press, and attacking the rights of his citizens. When I was 11, I moved from the Philippines to America, narrowly escaping the 21 years Ferdinand Marcos spent as “President.”

In America, I learned about our freedoms of the press, speech, and assembly. I learned that liberty was inherent in human life. Starting in 1972, I also learned that tens of thousands of Filipinos were abducted, tortured, and killed. Though every person is born with inalienable rights, Marcos denied those rights to the Filipino people.

He was a force of evil, power hungry, violent, and unwavering. But I was pretty stubborn myself. I knew what was happening in the Philippines was wrong. So I did what I was best at: I called my friends, neighbors, and community leaders. I organized and protested. I spoke out about the murders of two anti-Marcos activists, Silme Domingo and Gene Viernes, and called for an end to the U.S.-Marcos Dictatorship on the streets of New York and Seattle.

I used the freedoms of America to fight fascism in the Philippines: the freedom of public assembly, the freedom to criticize the government—freedoms Marcos had stolen from Filipinos and replaced with oppression. These freedoms enable regular people to make real change. They were crucial to free the Philippines from tyranny.

On Friday, October 13, I intend to use these freedoms to do the same.

America, my home of 45 years, has a President who attacks protesters, the media, and the rights of citizens. It is a familiar story to me and millions of my fellow Filipino Americans.

We have a lot to lose. Trump issued a racist immigration ban based on religion and skin color. He continues to imperil undocumented students and their families. He threatens to cut critical services that many Americans need to live. The AAPI community needs to be worried—Trump’s agenda makes clear that the rights of people of color are secondary to those of his white constituents. Our fundamental freedoms are at risk.

After years of working to stop Marcos, fighting for unions, and serving as Washington State Representative, I now continue to fight for the rights of Americans. This includes the right to a world-class education for all students, regardless of ethnicity.

Washington’s education system doesn’t serve our community equally. 50-70% of Southeast Asian Americans don’t have a college degree. Most teachers lack an understanding of API cultures and languages. They struggle to communicate with AAPI parents. And too often, grouping all “Asians” together in one broad, unequal racial category blurs the data that dictates public education services.

President Trump appointed Betsy DeVos as Secretary of Education. DeVos is a billionaire who believes schools are for profit and not for students. Trump and DeVos have proposed a budget that cuts $9 billion from public education and gives hundreds of millions to for-profit schools. DeVos’ plan funnels taxpayer dollars from the schools our kids attend to predominantly white institutions.

Under DeVos, public schools will be even more underfunded. The programs we’ve fought so hard for, the ones that protect our AAPI students will be first on the chopping block.

That’s why on Friday October 13, I will be joining thousands in protesting Betsy DeVos as she speaks to the Washington Policy Center in Bellevue. I fought fascism in the Philippines and now I will fight it in America, standing up for the rights of AAPI everywhere. 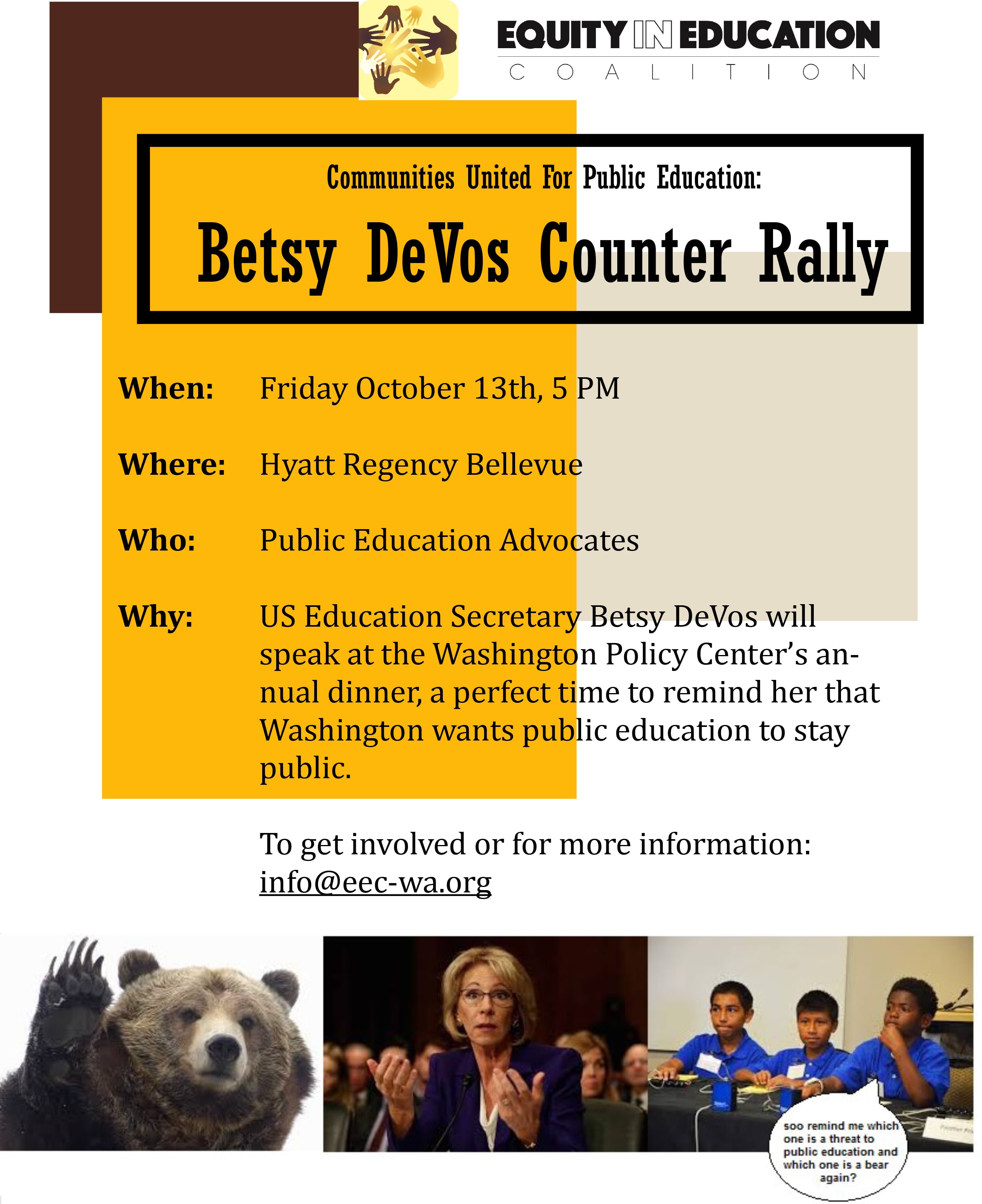