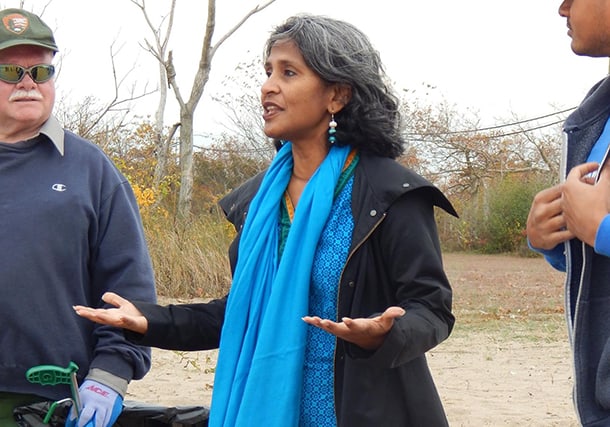 NEW YORK—On the first Saturday of almost every month Hindus from New York’s temples, organized by Sadhana, scour the waters and beaches of Jamaica Bay, by JFK Airport, with garbage bags and metal pickers, picking up cigarette butts, saris, bottles, bamboo staves and murtis (statues) of Shiva, Ganesh, and Hanuman offered unwittingly as polluting gifts to the bay, where worshippers, far from India, do their puja.

Aminta Kilawan, Sadhana’s point person for the monthly cleanups called Project Prithvi (mother earth in Sanskrit), believes that the spiritual makeup of the Hindu community  makes organizing for environmental justice less arduous than one might expect.

“The Hindu faith is very much rooted in the elements. There is reverence towards earth and water that motivates people’s desire to get involved in environmental justice activism. Particularly young people. You see a lot of young people at the cleanups.”

Savitri, from the Shanti Bhavan temple in Jamaica, brought her two young children to a recent cleanup. A Hindu from Guyana, she recalls that her fellow Hindus voted Marxist Cheddi Jagan into power in the early 60s when such a thing was unheard of. But she was more concerned that day with keeping her older son from strong-arming a murti of Ganesh from his little sister who fished it out of the water.

“It’s good to get the kids involved, so they have an [understanding] of problems like pollution at an early age,” Savitri said. “For us, coming here is motivated by seva, community service, which is why our temple is also part of the Sanctuary Movement.”

Sunita Viswanath, a feminist originally from Andhra Pradesh, had the idea of organizing a progressive Hindu movement in America. (Sadhana’s been on the scene since 2011. The word refers to Hindu spiritual practice, but in this case towards the goal of social change.) Her activities have included partnering with the Judson Memorial Church, an interfaith Sanctuary church whose radical roots go back to the time of the anti-Vietnam War movement. Judson was eager to have Hindu participation.

It is still uncommon for Hindu organizations to back controversial causes. They tend to be politically mainstream, leaning strongly Democratic in elections, but solidly supportive of India’s nationalist, Hindu First government of Narendra Modi. Even before Sadhana, Viswanath, who has been involved in social justice causes throughout her adult life, has had run-ins with Indian-Americans over caste, gender, class and Islamophobia. She tells the story of being the lone Hindu at an interfaith rally in 2011, on behalf of Muslims wanting to build a mosque near Ground Zero in Lower Manhattan. Hearing Hindu chants from across the road, she took heart, only to discover that the chants were coming from a group of right wing protesters. She adheres to a more inclusive Hinduism that maintains: The world is one family. We are all one.

Viswanath went around to many temples floating the idea of Sanctuary in the spirit of dialogue.

“The Sanctuary movement feels too political for many temples in Trump’s America. Hindus were reluctant. Shanti Bhavan was the only temple where the leadership did not hesitate. There was a desire from the get-go to participate. It took time of course to deliberate over the process involved. We had to answer questions like “What will this mean? Will we be targeted?” Very legitimate questions. For a brown-skinned community, making a decision to become a Sanctuary temple is very brave. It’s like saying, ‘Hello, come and get us!’ I would say around 40% of the devotees at Shanti Bhavan are undocumented.”

Like Savitri, they are mainly Guyanese. Sanctuaries in communities like Shanti Bhavan have a built-in existential edge that puts them in the front row of deportation’s shadow.

Apart from extending solidarity, Sadhana has been able to assist those eligible for citizenship, but not quite sure how to go about obtaining it, and afraid to ask strangers. It offers itself as a bridge to the intimidating world of lawyers, social service providers.

The Trump presidency has magnified the need for radical groups in émigré communities. Viswanath attributes Sadhana’s growth to his electoral victory. The group has members now in the Midwest and the west coast, as well as supporters in India.

Its co-founder’s all-inclusive radicalism, with its antipathy towards those who brazenly exploit the land and its inhabitants for the sake of profit, and defame minority religious groups for the sake of power, gives her a lot in common with India’s outspoken activist author, Arundhati Roy. As a child in India, in defiance of her family, she opposed caste. As a young woman in England, she suffered racism. As a grown woman, she joined Women for Afghan Women, and became a supporter of Palestinian rights.

Viswanath started Sadhana believing it is possible. Her voice may be local, not global, and shaped by a spiritually grounded worldliness, but it pushes against the status quo in the same uncompromising way as her counterpart oceans away. It also faces the same kinds of resistance.

Environmental justice issues, like Roy’s opposition to the Narmada Dam in India, and Viswanath’s focus on the Jamaica Bay cleanups here, may win the support of people whose social consciousness is embedded in a clearly defined good cause. Defying law enforcement authorities in the defense of undocumented immigrants can be more dicy. And for the Hindu radical, of course, there are many layers of traditional armor to penetrate.

During one cleanup, Rohan Narine, Sadhana’s other founder, and Aminta Kilawan’s husband, was walking along the beach with a sign-up sheet. He came upon a young couple he hadn’t seen before at a cleanup, and said hopefully, “Sadhana does more than just this cleanup. We also focus on caste and gender issues.”

His reply was an uncomfortable silence.