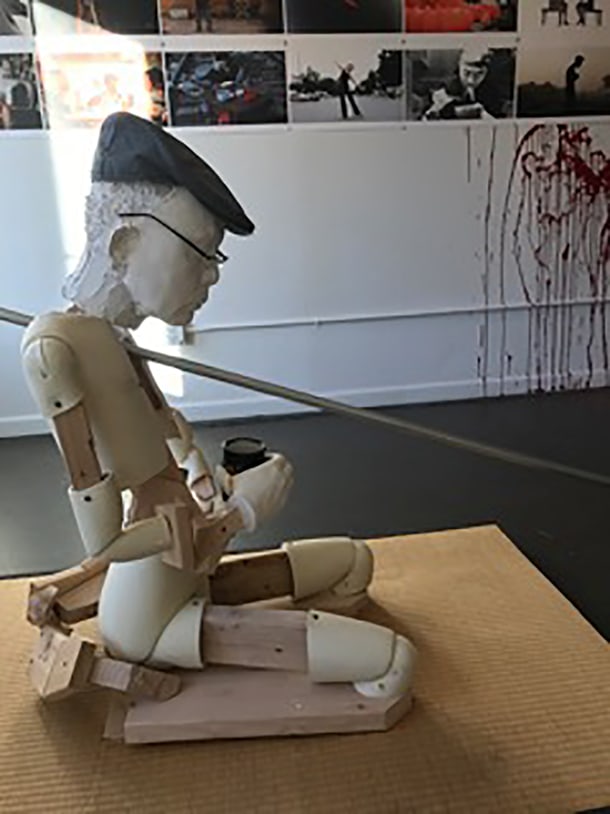 After the editing rooms, outside the theaters—even off-screen—what does a filmmaker’s work look like?

Sugano makes many of his own costumes and props; some of these are on display as visitors enter the gallery. Wooden tables, strips of film, costumes, VHS tapes and film canisters—all of these are products of Sugano’s work, but not how his work is typically known. A mixed media human sculpture with a casting of Sugano’s face crouches at the far end of the gallery, pondering; a Jodo Shinshu prayer for enlightenment is lettered in Kanji on the wall behind the sculpture. However, one of the most prominent features of the exhibit, running through the center of the gallery, is the artificial blood spattered all over the walls, plus the guts and viscera (also bloody, also artificial) that litter the floor of the gallery.

Filmmaking is in Sugano’s guts, and it comes from his guts, the show seems to say.

“I’ve known I wanted to be a filmmaker since I was 12,” Sugano tells me at the show’s opening reception. He left Japan at 18, and came to the United States for school, “a huge investment,” he says now. Since then he’s lived in three different countries and created close to 35 films. Sugano’s curator, Ali, selected stills from his films, enlarged and color printed them, and placed them in two long strips, one on each side of the gallery—in effect, creating two new silent films that highlight the body of his work, the uncanny and beautiful ways that Sugano frames the human body. Several of Sugano’s projects are represented by more than one still on the walls, such as The Buddhist Bug and The Red Chador, “where Masa was such a strong contributor,” says Ali. Their joint artistic endeavor, media lab Studio Revolt (studio-revolt.com), is known internationally for its installations and films, including the powerful award-winning documentary that Sugano directed, Cambodian Son.

The stills in Perpetual Irrelevance are gorgeous: a young woman’s face, surrounded by birds suspended midair; a sunlit couple kissing, encircled by vibrant loops of yarn. So many, in fact, that it would take a while for a careful viewer to absorb them all. They include a spectrum of racial and ethnic and socioeconomic diversity, in settings from forests to tatami rooms, from city streets to factories. Even in these stills, it’s clear that Sugano’s able to capture the humanity and vitality of his subjects, particularly through his use of framing, lighting, and setting.

In selecting the stills, “I’m very familiar with [Sugano’s] filmography,” says Ali, “so I basically just went through them all and picked what resonated with me.” She tells me about the themes she sees in the body of his work: symmetry, a diversity of people, a diversity of stories. “What’s complicated about his identity is that he doesn’t claim ‘Asian American,’” Ali told me. “Legally he’s a Japanese national, he has lived here [in the States] for half his life, but to me—[his aesthetic is] totally Asian American. [His films are] centered around the Asian American body, the Asian body, the transnational body, he completely embodies it—every place he’s been—he’s able to mine for these really interesting stories. The way he approaches storytelling, each frame matters. He is not only a serious filmmaker but one who takes his craft and aesthetics seriously, they are an extension of who he is an artist. So that’s been really remarkable to see.”

Sugano’s show at Feast Arts Center is just part of Tacoma’s rapidly-growing and vibrant arts scene. Artist Todd Jannausch, who owns and operates Feast with his partner Chandler Woodfin, says that he’s happy to showcase artists like Sugano and Ali in Tacoma. “The gallery [is] about creating exposure to really great emerging conceptual artists, working in all these different formats, in a way that’s not intimidating. The gallery system can often work] to elevate art so that people feel small … We can’t change all of that, but what we can do is make it so that people are not not intimidated to walk into a space like this one, and feel comfortable. It’s important for us in this [Hilltop] neighborhood and with [our goals] to have shows that are diverse in the artists that we’re showing, in the mediums that we’re showing, that are pushing conceptual questions. And so having Masa’s show here has been a blessing; it fits so many of the things we’re trying to do here.” Feast is a small but bright and airy space, and it’s been used for classes, galleries, outdoor movie showings, community gatherings like Sunday morning “coffee and doughnuts.”

Is Perpetual Irrelevance a retrospective show? In Sugano’s artist statement and explanation of the title for the show, Sugano muses that he worries about the permanence and relevance of his work: “I fear that sometimes my filmmaking existence is as irrelevant to America as [my brief stint as a sushi chef is to me].”

“I haven’t paused to look at it all yet,” Sugano says now, at the show’s opening reception. “I’m sure I’d be overwhelmed in looking at it all. But this is what I’m going to be doing for the rest of my life. I’m going to be making films until the day I die.”