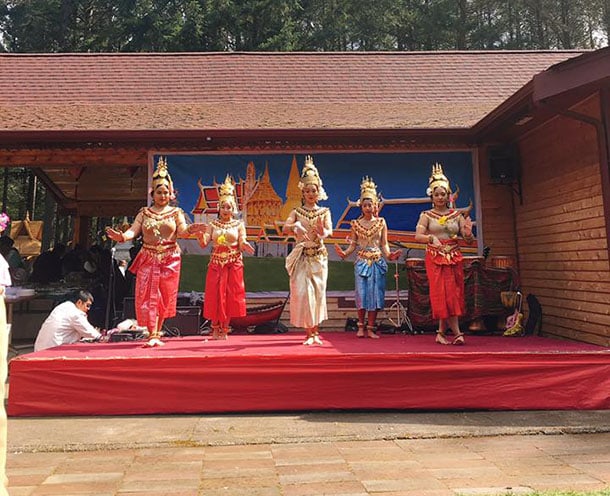 This calendar of Thai and Cambodian New Year celebrations was created by IE fellows Annie Kuo and Bunthay Cheam.

Thai New Year festival
When: April 8
Where: Atammayatarama Buddhist Monastery, 19301 176th Ave. NE, Woodinville, WA.
At 9:30 AM, there will be morning chanting, meditation and alm offering. At 11:00 AM, there will be a potluck lunch and water ceremony for the monks. For more information, visit: atamma.org.

Songkran Festival
When: April 15, event begins at 9:30 AM
Where: Wat Washington Buddhavanaram, 4401 S.360th St., Auburn, WA
This celebration includes religious ceremonies such as the Alms Offering, watering of the Buddha Statues and other ways of merit making. It emphasizes moral virtues, such as gratitude and respect to the elderly. Call 253-927-5408 for more information.

The ART of Survival: Remembering the Past and Welcoming the Future Series
When: Saturday, April 7, 1:00 PM
Where: Seattle City Hall Bertha Knight Landes Room and Lobby, 600 4th Ave., Seattle, WA.
Admission: Free and open to the public.
The Cambodian American Community Council of Washington presents their second annual community series called Remembering the Past & Welcoming the Future, which was title of the inaugural event held in 2015 to reflect on the 40th anniversary of the Cambodian Genocide. This year’s event showcases Cambodian Americans who have held onto their identity through the trauma of war and resettlement through art. Performances include a Bangskol presentation, Smot (traditional chant in Khmer), spoken word, film, visual arts and music. Artists include JusMoni, Venerable Prenz Sa-Nguon, Molica Chau, Keo Sanh of Eazy Duz It CC, Davey Tsunami, Phounam Pin and more.
Pre-register and/or volunteer info
Facebook event page
Instagram page