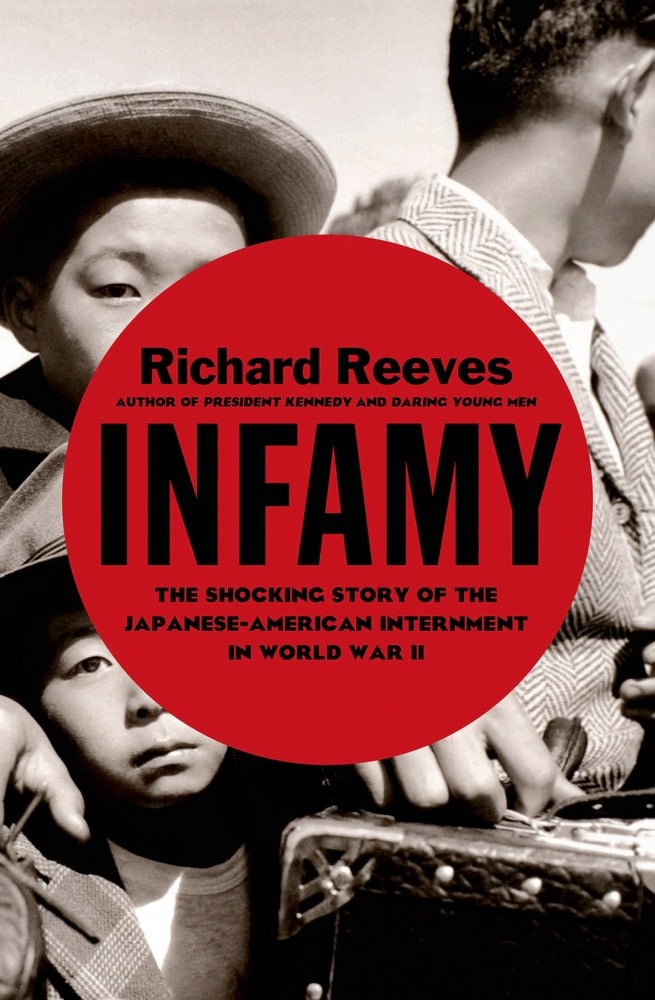 “I had wanted to write this book for a long time for the simplest of reasons: to answer the question, ‘How could this have happened here?’” With these plain words, Richard Reeves, award winning journalist, author of best selling biographies, writer for the New York Times and The New Yorker and correspondent for the PBS series Frontline, sets out in “Infamy: The Shocking Story of the Japanese Internment in World War II” to answer the question. Of course, the use of the words “infamy” and “shocking story” gives away his take. The story, it turns out, was shocking.

In the interests of full disclosure, I spent 3-and-a-half years of my adolescence in a camp during World War II, so I can’t be fully objective. I confess that I was reduced to tears in reading parts of this book, tears of anger and pain, a reaction that surprised me since, over the years, I’ve studied this piece of history fairly closely. Much in this book is familiar to me but Reeves’ narrative is so well done it hit me all over again.

Reeves has taken full advantage of the tools and resources that are now available and he seems to have looked deeply and broadly. There are a few questions that I would raise: the Manzanar “riot” section seems slightly different from the accounts that I was told and he also left out mention of William Hohri’s Supreme Court class action suit that was fought in the 1980s. And there is the question of the use of the word “internment.” Reeves understands that there are objections to its use to define the camps but he says that he still finds it the best overall word.

Quibbles aside, having a journalist/historian of this stature tell the tale is a blessing because his words carry the weight of authority and he doesn’t pull his punches. He says of two army officers most responsible for carrying out the mass incarceration, John DeWitt and Karl Bendetsen, “both bigots, the former a fool, the latter a brilliant pathological liar.” And “the villains of this story include California attorney general Earl Warren who rode the anti-Japanese tide to the governorship of California,” Cordell Hull, Henry Stimson, John McCloy, Roger Baldwin, Tom Clark, William O. Douglas, William Randolph Hearst, Walter Lippman, Edward R. Murrow, Dr. Suess, and “hundreds of other raving journalists.” Of course, President Roosevelt. These are the men who put us behind barbed wire and kept most of us there for the war’s duration. Their roles are amply documented here.

Once the war started, the scapegoating began, quickly, unrelentingly, and the government moved fast. We, American Japanese, were demonized and dehumanized, obvious targets for venting the frustrations and fears of the people due to the Pacific war. It shocked me to realize the virulence of the campaign against us and how it continued throughout the war. Isolated in my camp, Poston, relatively cut off from what was happening outside, I was not fully aware of all that hate being directed at us.

Reeves uses diaries, memoirs, testimonies and histories, both written and oral, and the cumulative power of the stories he chooses brings home how devastating the camp experience was, especially for the Issei, the immigrant generation. You won’t forget Stanley Hayami, the boy who kept a diary during his days in Pomona Assembly Center and Heart Mountain Concentration Camp who was killed in action in Europe in the final days of the war; or the Issei father who wept when he realized that the farm he thought he would return to could only be had by buying it back for an impossible sum of money. It had been sold without his knowledge.

Throughout the narrative, Reeves’ sense of moral indignation propels it forward. This is a powerful book, an especially appropriate read for younger Nikkei who were never told very much by their parents and grandparents. The trauma of the camps was so great many retreated into becoming the “quiet” Americans and exhibited behavior that earned us the label, “the model minority”. Now, in this one volume, I believe that they can get a good understanding of concentration camp history and how we became who we are.

But just about everybody can learn about the workings of our democracy and how easily it can be subverted. Reeves points out that this story is just one example in America’s long history of abusing and mistreating immigrant groups and peoples of color. This should be a cautionary tale to keep us from acting so hastily again, for instance, in today’s world, of scapegoating Muslim and Arab Americans. Have we learned any lessons? Maybe, and maybe not.