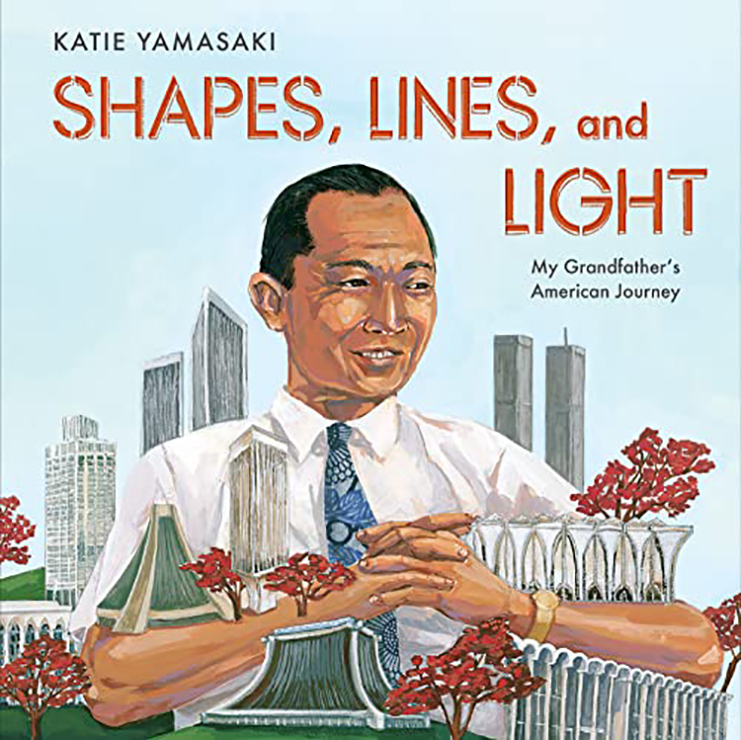 Minoru Yamasaki, one of the most famous architects in the world, was born in
Seattle, Washington and when he was a young boy lived in Yesler Terrace. This
book is written by his grand daughter, Katie. When young Minoru grew up, there
was a lot of prejudice against Japanese Americans. He had to fight to get a job and
make enough money to go to college. He worked hard in canneries in Alaska
where the work was cold, dark, and smelly.

Minoru did go to college and graduated from the University of Washington. He
always thought about spaces where he was not confined or barred from going
into. He liked peaceful open spaces. “Bringing the outside world in. Letting the
sun shine through ceilings illuminating shapes. The reflecting water of a still pool
quieting a busy mind. So one might sit, in peace.”

Though he endured much discrimination, Yamasaki worked hard to fight against
inequities and became internationally known for his architecture.

Yamasaki created buildings all around the world from New Delhi, India to the
original World Trade Center in New York. ”His shapes, lines, and light brought to
so many serenity, surprise, and delight.”

One of the most famous buildings Yamasaki designed was the Pacific Science
Center in Seattle. Maybe you have been there. You see the beautiful arches rising
into the sky.

Children’s book artist/author and community muralist Katie Yamasaki’s grandfather was the noted Seattle architect, Minoru Yamasaki. In her new picture book, she pays homage to his legacy in “Shapes, Lines, and Light: My Grandfather’s American Journey” (Norton).She appears in Seattle twice. On Saturday, January 28, 2023 at 2pm at Seattle Public Library – Central Library in the Microsoft Auditorium. 1000 – 4th Ave. Free but go to spl.org to register. Or call 206-386-4636. On Sunday, January 29, 2023 at 11am, she will be at Third Place Books-Ravenna. 6604 20th Ave. NE. Free but register in advance at thirdplacebooks.com.