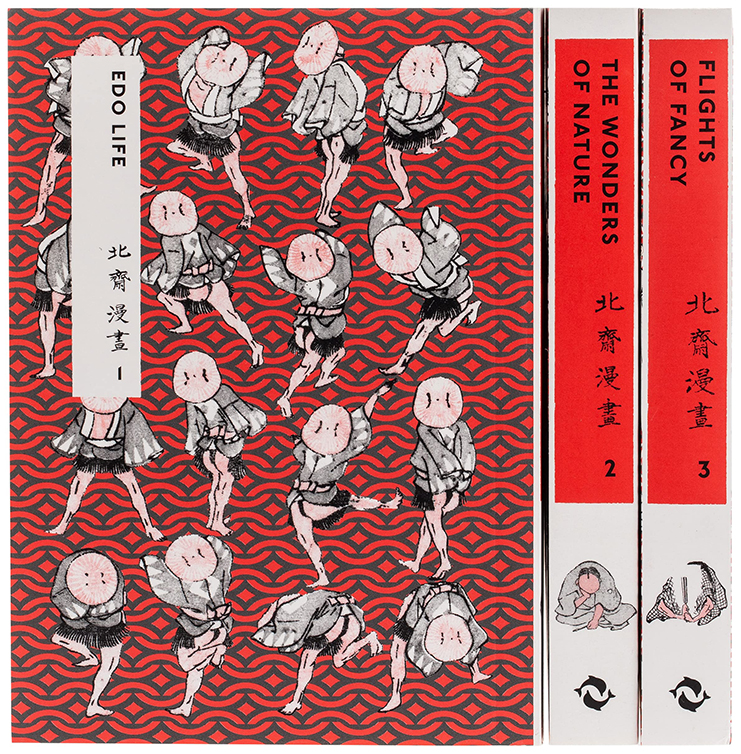 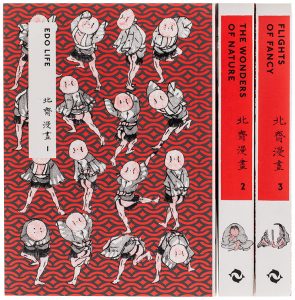 In 1812, Katsushika Hokusai created a series of three hundred pictures for his apprentice Maki Bokusen to learn and copy. What began as an etehon, a drawing manual a master would create for their students, ultimately transformed into a 15-volume series that spread throughout the homes of artists and the general public alike. Published as Hokusai Manga, the collection of Hokusai’s work brought enjoyment and inspiration throughout Japan and around the world.

This recent release of Hokusai Manga comes in an altogether new format and in a unique thematic organization. Released as a collection of three palm-sized books, the breadth and creativity of Hokusai’s hand is made thoroughly accessible. While contemporary manga certainly draws from Hokusai’s work, the context of the book’s title comes from the phrase manzen to egaita ga, meaning “whimsically drawn pictures.” The original volumes were catch basins for Hokusai’s seemingly endless well of creative imagination. Corralling the diversity of work into organized themes was the challenge and goal of this release of Hokusai Manga. Book One chronicles “Edo Life”, the people, objects, architecture and scenes of life within Edo (modern day Tokyo). Book Two shares “The Wonders of Nature”, a collection of landscapes and studies of plants, animals, creatures of legend and water. Book Three is a view into the unrestrained creativity of Hokusai’s “Flights of Fancy”, bringing together the fantastical, legends, and religious icons of history.

Hokusai’s emotive style can communicate through just a few brush strokes or an intricate array of fine detail work. There is a remarkably fluid sense of movement that is consistent throughout his illustrations. His work is also frequently humorous, to the point where you will surely find yourself grinning as you move through the pages.

Book one, Edo life, is full of gaunt men and women partaking in daily life, wrestling, playing games, and dancing while large, well-fed men loll beside drawings of food and baths. Book one best captures Hokusai’s incredible ability to convey organic human movement through deceptively simple illustrations. The book is divided into four chapters of illustrations, “People, People, People”, “Daily Life”, “Figures in Motion”. And “Objects and Architecture”. There is an additional fifth chapter “Understanding Hokusai Manga”, which recurs as the last chapter in each book, providing information about Hokusai and the context for how and why he created Hokusai Manga.

Book Two, “The Wonders of Nature”, displays how “Hokusai saw nature itself as his master, his greatest teacher.” Some of Hokusai’s most well know work such as “The Great Wave off Kanagawa” present the grandness and power of nature but throughout book two, he also delves into the ephemeral aspect of everyday moments and landscapes. In doing so, he gives life to individual blades of grass and animates animals through their eyes. The book’s chapters of illustrations are “Bird’s, Beasts, Insects, and Fish”, “Mountains, Rivers, Plants, and Trees”, “Waves, Tides, Streams, and Rivers”, and “From the Heavens”.

Book Three, “Flights of Fancy” showcases the curious and unbounded creativity that Hokusai had, as well as his translation of historical and religious legends into imagery. As the final book of the collection, “Flights of Fancy” rounds out Hokusai’s already expansive range of formal studies, both human and natural, and extends it to the unknown realm of imagination. Many of the bizarre scenes depicted seem to transcend any given time period due to the imagery’s sheer strangeness. The book’s chapters of illustrations are “A Compendium of Craziness”, “A League of Legends”, “A Phalanx of Phantoms”, and “A Deluge of Deities”. The chapter titles alone should be enough arouse curiosity.

This new release of Hokusai Manga is both thorough and organized, delivering an engaging and informative presentation of Hokusai’s diverse range of work and background on the artist himself. It also importantly highlights the impact that Hokusai’s work has had internationally across generations. This modern collection continues his work’s legacy, rewarding through just a glance or more careful study.