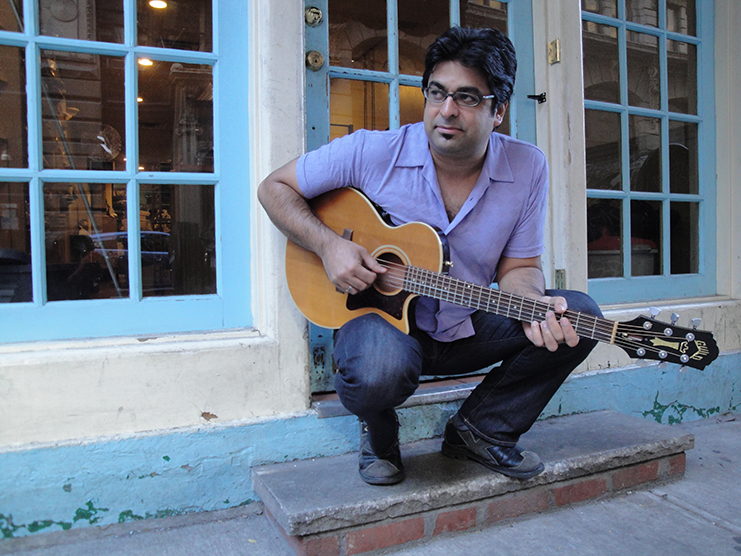 Feinberg has dedicated more than 20 years to the serious study of sitar, building upon his early background in jazz and western classical music. A 2006 Fulbright scholar and recipient of numerous grants and awards, Feinberg studied under the world-renowned Ustad Ali Akbar Khan and is widely recognized as one of the most talented sitar players today.

Abbasi, who was born in Karachi, Pakistan, and raised in Southern California, artfully couples his early influences of jazz and rock and roll with the traditional elements of Hindustani and western classical music to create compositions in textures as rich and diverse as the players he enlists to bring them to life. A 2021 Guggenheim fellow with 15 original albums under his belt, Abassi continues to draw out fresh new sounds in this most recent collaboration.

Naya Baaz performs at Town Hall on May 10. Below is an interview with Rez Abbassi.

IE: As a Pakistani-born American artist, how much of your exploratory nature do you attribute to your multicultural upbringing and childhood experiences? Do you think these circumstances played a part in your inquisitiveness and creative development?

Rez Abbasi: Certainly, they did both unconsciously and consciously. Strangely, I can’t separate myself and see myself the way others see me. It’s a natural process that takes place when you’re an immigrant at an early age, in my case four years old. I remembered very few things about Pakistan and was surrounded mostly by American culture growing up, so it wasn’t until later that I realized the depth of culture I was born into. Ultimately, food and music brought me back and eventually spiritualism. So overall I’d say as an immigrant and maybe even more so as an immigrant artist, everything blends to a point that it transcends separation.

IE: You’re known for continually pushing the boundaries of genre classification, exploring new musical territory with every album you release. In earlier interviews, you have cited numerous influences from Led Zeppelin and Shiv Kumar Sharma to Jim Hall and Bill Frisell. Are there any figures, musical or otherwise, who specifically emboldened you to pioneer your own sound?

RA: I’d say if there is one artist it would be John Coltrane. He embodies the ideal attitude of what it is to be an inspiring artist. Not all of us can reach that ideal but having it there as a gauge is important. Another artist I can say that about is Keith Jarrett. Again, these musicians are exceptions that seem to concern themselves only with the music while having a desire to relate to the deepest of listeners.

Since I have a chain of albums that are diverse, naturally I also reflect on that as a way to not repeat myself. I don’t mind variations on a good concept so I do have albums with the same band but there are so many fantastic musicians out here that I also feel a tendency to put new groups together. Maybe that tendency is partly what leads to the notion of exploring new territories.

Also I’m influenced by a lot of diverse music, and that finds a way to the top. As difficult as it can be, I also don’t classify music in genres any longer even if there are obvious components that separate styles. I just listen and react, at least I’d like to think that!

IE: When moving from one project to the next, is your direction influenced by other musicians you’re playing with at the time – or do you seek out new collaborators based on the next style you want to explore?

RA: I never think in terms of “style” or trends, etc. And, yes, the direction is certainly influenced by who is in the band or at least the orchestration I’m thinking of for that project.

DQ: How did the quartet Naya Baaz come together, and how long have you been working on this project?

RA: Josh approached me to start the collaboration, and at first I was apprehensive because I’m aware of the limitations of combining jazz with Indian music. With Josh, since he’s studied both jazz and Indian classical for decades, I thought it can work great mainly because he understands chromatic harmony. Neither of us had to feel limited while writing.

Also, we decided we wanted to collaborate for real. In other words, I’d come up with an unfinished progression or theme and send it to him so he could have a say in how the composition would unfold. He did the same, and so we ended up with a number of tunes that couldn’t have been written alone. It’s the first time I’ve done this, and it produced interesting results that are more in line with a hybrid project than if one person wrote the music.

IE: Every member of Naya Baaz is a celebrated musician in their own right. Is the composition process collaborative? How much latitude does each member have to write their own parts into each piece?

RA: Well it is mostly a collaboration between Josh and I, but as with all the groups I play in or lead, the musicians are encouraged to play themselves which means they have room beyond the improvisations or solos they take. But the meat of the compositions is solidified by the time they hit the full band.

IE: There’s very limited information about this project available online. Is this intentional, as the work is meant to be appreciated in a live context – or do you have plans for a studio album with Naya Baaz?

RA: We do have a new album that will come out later, and it’ll be our first so that’s why you won’t find much on the web at this point.

IE: Music journalists frequently reference your tendency to “reinvent” your sound – but it seems to me that you’re expanding on it by incorporating new elements and ideas. For those who are familiar with your earlier work, what new elements can we expect from a Naya Baaz performance?

RA: I agree with you. Let’s just say I’m open to large leaps in evolution. I’d hope as an artist that my early work doesn’t sound like what I’m doing now and if there’s too much of a similarity, I have not succeeded.

I would sight another hero, Miles Davis as someone who constantly evolved and still serves as an ideal to endeavor towards. Sometimes journalists are off the mark because they don’t know how to coach an artist, especially one that can’t be coached. If we think about it, music at its best reflects the times we live in and that’s the reason it branches out every few years. I don’t mind the term reinvent but it kind of connotes an idea that something is being left behind whereas expansion or evolution sounds more inclusive.

With Naya Baaz, audiences will hear something fresh compositionally, conceptually and texturally. Some tunes carry more of a jazz approach and others more an Indian and that’s simply a reflection of us.

Naya Baaz will be performing at Town Hall on Friday, May 20th. In-person and virtual tickets are available via Earshot Jazz.