Up-and-coming queer R&B artist Sarey Savy is defying the odds to make a name for himself in the music business.

Savy released his first EP, titled “18,” last weekend, just a day before his 18th birthday. He says the new release is an effort towards expanding his audience and transitioning into adulthood.

“I was born into a musical family, so there wasn’t one time where there wasn’t someone singing in the house,” says Savy who grew up in a Cambodian immigrant family in White Center. “I remember watching my family members sing at restaurants, pageants, and casinos. I knew that one day I would inherit that trait to possibly become a professional performer.”

Savy has spent the majority of his young adult life writing songs, performing gigs in his community, and auditioning for several talent-based reality shows. He began singing in his school’s choir at the age of 8, and by the age of 12, Savy was recording his own music with the help of his sister’s boyfriend, who worked with an indie music label.

“In middle school it became clear that I wanted to take singing seriously,” Savy said. “Sometimes I would not go to school and make up an excuse just so I could stay home and work on music. It was about finding my singing voice and finding the musical genres that I could fit into, and Hip-Hop and R&B are my genres.”

Savy draws influence from Cambodian arts and culture, and says he has experienced overwhelming support from his community as a young, gay musician.

“I am currently trying to incorporate [Cambodian musical influence] into my future work,” Savy said. “But, only time will tell what will be the outcome.”

Savy’s current songs have a mainstream R & B sound, and he can often be heard covering the latest Top 40 hits on YouTube.

Savy scored his “big gig” in June of 2013, as a headliner at the NW Global Fest, a four-day long cultural festival hosted by the Fiji Multicultural Association of Washington, which attracted an estimated 25,000 attendees. Shortly after, Savy headlined the Capitol Hill Pride Festival, alongside artists like Mary Lambert (best known for her work on Macklemore & Ryan Lewis’ hit “Same Love”).

“I started finally getting media attention,” Savy said. “It was a really good summer, people were calling me and I was getting gigs.” 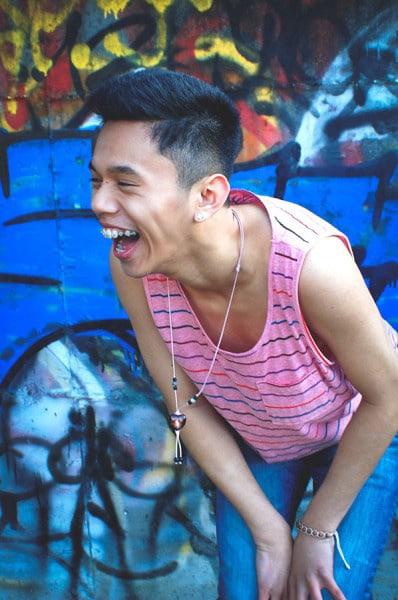 Savy brushes off any mention of challenges he’s faced being out as a young performer. But he says one of the biggest emotional inspirations for material on his new album was a recent personal tragedy that led him to write the single “Run Out Of Time.”

“I think the song is a fan favorite because it’s relatable,” Savy said. “The song was inspired by a man I dated for about 3 months, who passed away after we broke up. It’s a sad experience, and I’m still getting over it. A lot of the songs I’ve written since his passing are inspired by him.”

Savy’s 5-track EP deals with a number of mature topics. He believes that the EP marks his transition to adulthood.

“A lot of the songs seem like they’re about being young and having fun, but a lot of it is really about everything that’s been going on after his death,” Savy said. “I feel like because of the nature and the topics of the songs in this EP, I feel like it would connect to a more mature audience.”

Savy encourages other aspiring queer entertainers to continue reaching for their dreams.

“A lot of people know me as a queer artist, but I’ve never been bullied about it and I’ve been surrounded by a good support system,” Savy said. “The Cambodian communities all over the U.S. accept who I am, there’s more to me than just my sexuality.”

Savy says he’s currently focused on trying to reach out to an audience beyond the LGBTQ community.

“It is kind of complex and difficult to break out of my niche and branching into a more general audience because the public who already know of me, know that I’m gay,” Savy said. “I’m thankful for those who do already see past me affiliating with LGBTQ.”

With talk about exploring new management, an upcoming video, and another headlining gig for Capitol Hill Pride Festival 2014, Savy is stepping out of his teen years with big goals and a good foot forward.

This story originally appeared on the Seattle Globalist at www.seattleglobalist.com. Atoosa Moinzadeh is a UW student studying Economics and Journalism and a columnist at The Daily. She loves contributing to conversations about social, POC, and economic activism. When she’s not writing, she enjoys collecting zines, reading up on pop culture critique, and brushing up on her Farsi.