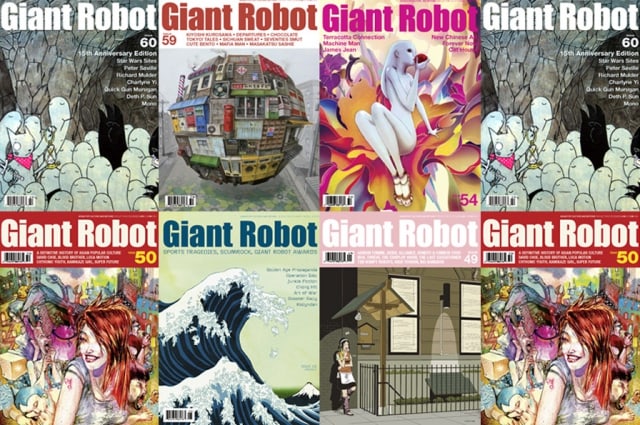 In 1964, when I was 10 years old in Berkeley, we were still “Orientals.” There wasn’t an Asian American pop culture scene yet. At home, we kids listened to The Flower Drum Song on vinyl and ran to the kitchen—always too late—when my dad said, “Hurry! there’s a Japanese on TV.” Sushi in supermarkets was 40 years away. Pad Thai, anime, and tofu meatballs: unheard of. Asian American studies wasn’t an academic field and China was still red.

So, to visit the Oakland Museum’s “Super Awesome: Art and Giant Robot” exhibition of paintings, installations, and other works by 15 Asian and Asian American artists is to marvel at the rise and influence of the cool Asian geek/punk/DIY artistic sensibility.

Celebrating the 20th anniversary of the landmark zine Giant Robot, the artworks range from Masakatsu Sashie’s riveting oils that warmly detail dystopic Japanese spheres made of rusting vending machines to Adrian Tomine’s spare but emotionally intense graphic novel drawings—his art has been featured on 10 New Yorker covers. There are the delicate line portraits on bedsheets of intimate friends by Shizu Saldamando. The cute, cartoon-like bears of Luke Chueh reveal on second glance blood seeping down like molasses. A sense of the forlorn haunts the sweet animal and robot characters in urban Japanese scenes by Kozyndan.

The work of these contemporary artists was supported early by Giant Robot, the stapled-and-folded zine started by Eric Nakamura from his Los Angeles bedroom in 1994.

There had never been anything quite like it. By Nakamura’s own description, Giant Robot was a low-quality “punk rock photocopied” project that covered Asian American topics and explored identity “not through some kind of birthright but as an expression of taste,” observed Los Angeles Magazine writer R.J. Smith, who called Giant Robot “probably the best publication to come out of L.A.” in the decade that followed its inaugural issue.

One highlight of the Oakland Museum show, in addition to the Nakamura-designed Toyota Scion xB, is the table filled with vintage black-and-white Giant Robot zines from the early days.

By 2002, Giant Robot was a glossy magazine and had a circulation of 38,000 per issue, distributed in the United States, Canada, Japan, Singapore, and Hong Kong, according to Smith. The enterprise grew to become a platform for Asian American art and culture. Giant Robot opened stores with art spaces in L.A., San Francisco, and New York and a restaurant in L.A.’s Sawtelle neighborhood. It became a touchstone for young people who looked to Giant Robot for information about superflat, Hong Kong films, ramen rankings and even Eric’s visit to Manzanar with a skateboard.

The magazine stopped publishing in 2011, after producing 68 issues, and moved online. The retail store in Los Angeles has a gallery space that continues to curate up to 20 art exhibitions and events per year.

Many of Giant Robot’s featured artists went on to gain prominence later, such as David Choe, a native of L.A.‘s Koreatown, who famously spray-painted murals in the headquarters of Facebook in 2005 and took stock in lieu of a $60,000 payment. HIs first show in Los Angeles was at GR2. James Jean, who did a Giant Robot cover in 2008, does his own work as well as commissions for firms such as Prada, which turned Jean’s paintings into wall coverings for its Soho and Beverly Hills stores. Jean, a self-described ABC who arrived in the United States at age three from Taiwan, is inspired by woodblock prints, scroll paintings, calligraphy, and Chinese and Japanese erotic books.

L.A.-based designer Kyle Ng said: “When you’re a kid, you’re trying to grow up and you think, ‘who is speaking for you?’ and there wasn’t really anyone. Giant Robot pulled it all together, like ‘this is our taste.’ Seeing Asians and subcultures like that was really inspiring.”