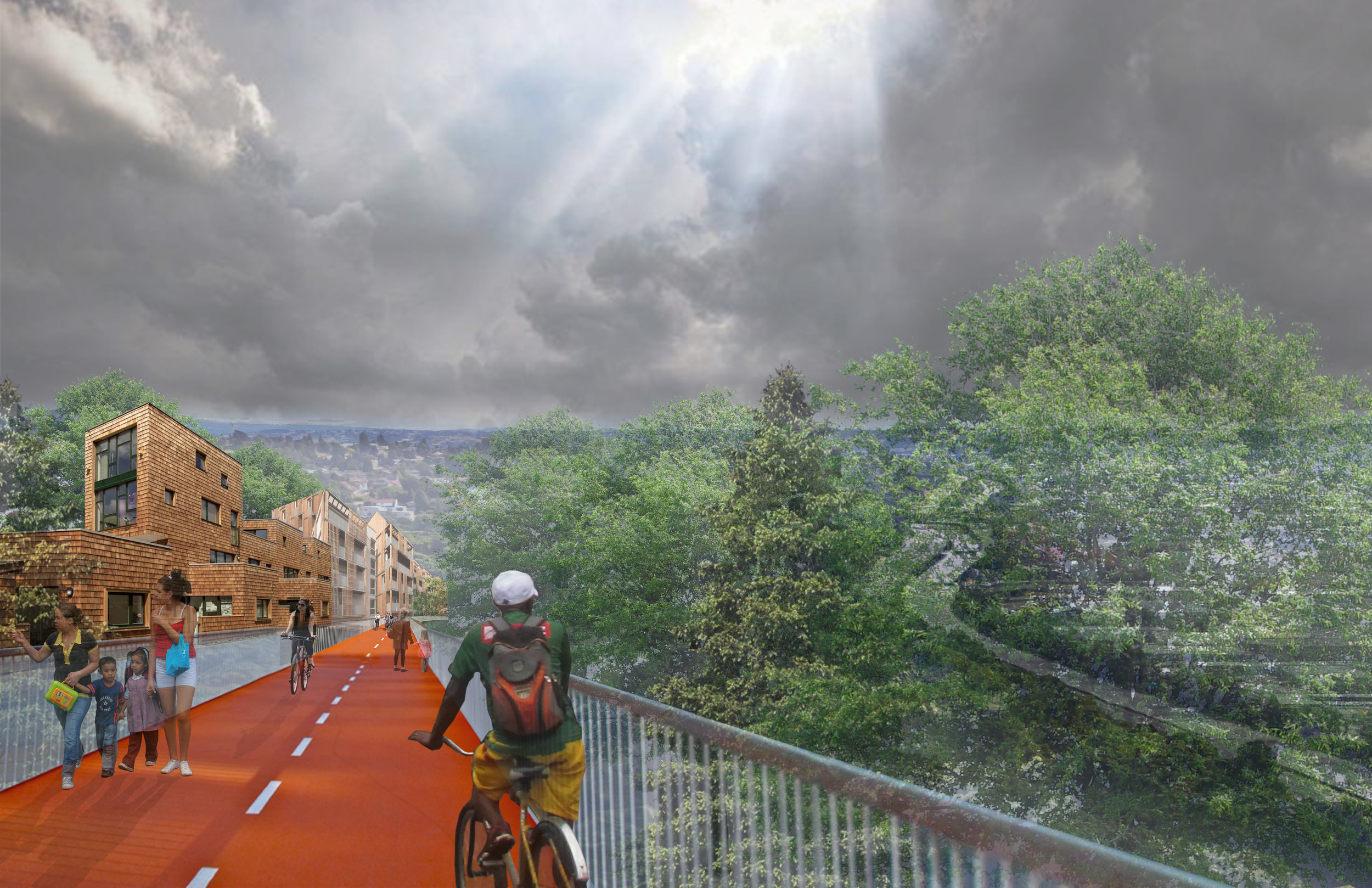 By Taj Hanson and George Lee

A day ago, someone driving south along Interstate 5 looked in their rear view mirror, and said goodbye to Seattle because they got priced out. And as they drove past, a person below the highway experiencing homelessness looked up at the Jungle and searched for a safe place to sleep.

Taj Hanson and George Lee, a landscape architect and artist, got together to appropriate the tools of their trades to propose an idea for helping address homelessness and housing affordability in Seattle: build The Equity Line – a linear series of housing developments and urban trail as a lid over parts of Interstate 5 in downtown and as new construction in parts of the Jungle. The proposal is illustrated below and provides the 28,000 units Seattle needs today for people experiencing homelessness and making 80 percent AMI or less.

The Equity Line developments would be approximately 80% subsidized and affordable units for homeless, low-income, and middle class residents, and 20% market rate for higher earners. While the integration of these different housing types is important from a social perspective, the profits generated from the market rate housing developments would help provide funding for the construction of the low income and subsidized housing. The Equity Line would avoid eminent domain, efficiently use existing public lands, and strategically spread the development through central Seattle. It would also reduce air and noise pollution from I-5, provide maintenance staff to restore parts of the Jungle to a healthy native forest, finish a missing link of north/south ped/bike trail infrastructure, and enhance livable, walkable communities. It would be an immediate, permanent stopgap for affordable and subsidized housing shortages that would bring Seattle up to speed for incremental housing policies to then function as needed.

Designers of the built environment are often missing the opportunity to evolve the conversation and help determine viable solutions to affordable housing needs and homelessness. Urban design and development ideas gaining media traction largely ignore the current socioeconomic crisis in Seattle. Recent proposals include lidding the I-5 corridor through downtown Seattle with an unnecessarily large and expensive park and connecting a series of privately owned downtown roof tops with elevated skyways for “public” use. While these proposals are not completely without merit, they are focused on providing amenities for mostly wealthy neighborhoods in a part of downtown that is already well-served with public spaces, thereby further supporting displacement and overall inequity. The Equity Line is a proposal that seeks to break this disturbing trend.

The Jungle development portion of The Equity Line would be in existing, flatter portions of the Jungle’s hillside forest at Jose Rizal Park and the corners of Beacon Ave S and 10th Ave S. While Seattle’s policies are currently directed at keeping people out of the Jungle, this proposal recognizes the immense value the Jungle has, along with other bluffs in the city, as a natural resource and publically accessible greenbelt.

Jose Rizal Park, at the northern tip of the Jungle, is an excellent park of 9.6 acres but is characterized by low use, poor visibility, and perceived lack of safety. A linear strip of 3-7 story buildings, lined along the existing Mountains to Sound Greenway Trail, would bring activity and eyes on the park, increasing safety and park utilization.

About a half-mile south, the area west of the sparsely developed blocks of 12 Ave S and Beacon Ave S are some of the flattest in the Jungle and are public lands. The same type of linear housing developments proposed for Jose Rizal Park would be sited here using cut and fill terracing techniques. In addition, a new elevated ped/bike trail, completing the missing link from the Chief Sealth Trail further south to the existing Mountains to Sound Greenway Trail, would be constructed adjacent to the new housing.

A mile north of Jose Rizal Park, the Interstate 5 lid development portion of The Equity Line would cap much of Interstate 5 between E Madison St and Mercer St in South Lake Union. The entire development would preserve existing transportation connections while creating a new ped/bike trail connection and linear park adjacent to a series of 20 story residential towers of mixed income units. 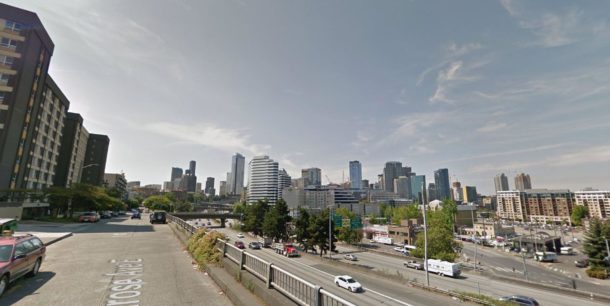 Vehicle emissions generated from Interstate 5 traffic are poisoning people that live close to the freeway. Interstate 5 is a polluted, noisy, ecologically dead zone. The Equity Line makes the case to cap Interstate 5, clean the air with containment and increased tree canopy, house the homeless and middle income people being pushed out of central Seattle, and give everyone a new linear park and ped/bike trail.

The linear park and trail will be constantly used, be visible from the adjacent housing, and have less chance of experiencing potential dangers we see with large urban parks such as Freeway Park, where there is less activation and visibility. The Equity Line’s linear park would offer the public a promenade experience and provide fantastic views of the city to the west. The ped/bike trail would link south to the Mountains to Sound Greenway and new elevated ped/bike trail in the Jungle and continue north off-street all the way to the Melrose Trail and beyond.

This proposal has been intentionally distilled and simplified with the goal of generating conversation between multiple cultures, professional disciplines, and policy makers. The socioeconomic crisis that Seattle, and many American cities for that matter, are experiencing needs the attention of everyone. This is a complex problem that will only be solved by a solution with many layers. However, we need to act now, act boldly, and actively manage progress along the way. We are simply bringing ideas to the table to catalyze discussion, push the creativity of big design moves in our city, and embrace the social and environmental responsibility that designers and artists should exhibit.