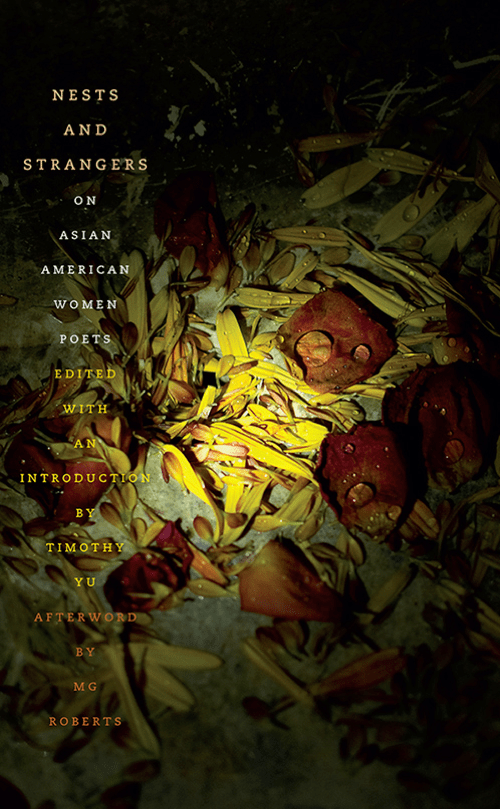 For an Asian American poet like me, “Nests and Strangers: On Asian American Women Poets” is a bit like having all of my favorite people in one room, talking animatedly to one another. Even for mainstream readers, an anthology of critical essays, edited by Timothy Yu and with an afterword by Mg Roberts, proves a worthwhile read, offering lively insight into a community of thinkers and writers traditionally overlooked—or at least, misconstrued—by poetry audiences in America.

The book is comprised of essays by literary scholars Sarah Dowling, Merle Woo, Sueyeun Juliette Lee, and Dorothy Wang, each of whom addresses the work of a different Asian American woman poet. The essays are as diverse in tone and approach as the oeuvres of poetry themselves, which I found refreshing, given the “all y’all look alike” attitude sometimes held toward Asian American poets. In a recent interview with The Conversant, editor Timothy Yu emphasized that he “did not want to have it be a strictly academic collection, because the critical community around Asian American poetry is one that include[s] both poets and scholars.”

What results is an anthology about Asian American women poets that espouses not a specific style or subject matter, as one might expect, but a loose, yet inclusive network of associated concerns.
The poets—Myung Mi Kim, Nellie Wong, Mei-Mei Berssenbrugge, and Bhanu Kapil—draw from diverse cultural reference points and communities of political activists, academic scholars, and visual artists. What each of them has in common, however, is the desire to make ways of inhabiting language that account for their experience; as Myung Mi Kim puts it, “to rework the entire continuum of language, form, prosody. … Hand by hand, finger by finger, foot by foot” in such a way that reflects “how you are coming to your own condition.” As a female Asian American poet, I understand the exigency of this work. One must necessarily refashion the English language when one’s subjectivity originates from the dilemmas described here, in Dorothy Wang’s essay on Bhanu Kapil:

“How does one begin writing when the ‘I’ who speaks emanates from a body that is viewed a priori as a not-citizen, a not-person, a not-human? How to write when the ‘I’ cannot contain the psychic fragments shattered by dislocation, emigration, immigration, and assimilation?”

According to Sueyeun Juliette Lee, Mei-Mei Berssenbrugge’s answer is the lengthy, seamless line, which “reflect[s] her desire to ‘dissolv[e] borders,’ thereby allowing one’s perceptions to traverse multiple territories.” For Nellie Wong, scholar and friend Merle Woo argues, it is to use “radical realism” to express revolutionary solidarity with “family, community, co-workers, union brothers and sisters, and comrades … the glue [that] binds us together.”

In her afterword, Mg Roberts asks, “What does it mean to be an Asian American woman? What is an avant-garde Asian American Poetic?” It is precisely these questions that drive the conversations in “Nests and Strangers”—not to mention, the Asian American poetry community in general.

The genius of Roberts’ afterword, however, is in her reframing of the room in which this conversation takes place. By conceptualizing “Nests and Strangers” as “an errata of gestures … branching mycelium fibers reaching to actualize itself in/though the animal/human body,” she transforms the voices represented by the anthology into embodied forms. Echoing the poets themselves, her own voice becomes multitudinous, speaking in a manner that is radically inclusive, yet irreconcilably fragmented, as well. Echo chamber? Pastiche? Or something more? In her essay on Myung Mi Kim, Sarah Dowling talks about the “intrusive loudness” of the texts that invade and subsequently interpolate Kim’s subjectivity. Roberts’ afterword, similarly composed of outside texts, is filled, not with an intrusive loudness, but an inclusive loudness, each of the poets’ voices combining to form, as she puts it, an endocrine of subjectivity. A room full of voices, yes, but even more importantly, of bodies.