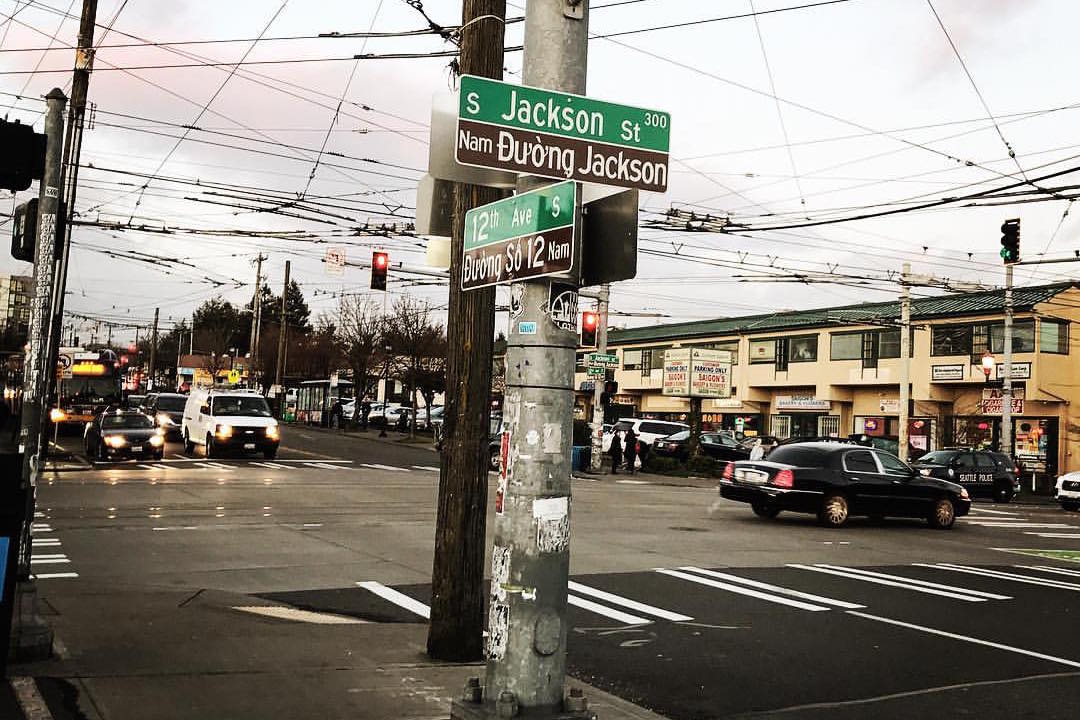 With the Seattle Navigation Center shelter scheduled to open in Little Saigon this year, city officials hope to transition homeless people off the streets and into permanent housing. However, community members are calling for a clearer plan, transparent community engagement, and city-allocated resources to address impacts on the neighborhood.

More than 30 people gathered at a public safety meeting hosted by Seattle Chinatown International District Preservation and Development Authority (SCIDpda) on February 21. Many voiced frustrations about the City’s lack of prior communication and concerns about the potential effects of the shelter on the CID community.

City of Seattle representatives, Ben Han with the Department of Neighborhoods and Jess Chow with the Human Services Department, heard questions and concerns.

“We hope you can pause it until you can address all of our community needs as well as only open when you are actually sure that everything is secure,” said Quynh Pham, Friends of Little Saigon board chair. “I want the center to be very planned out and the community is engaged and knows what’s happening before it opens.”

“We want to understand the whole logistics and plan so we can be part of the solution,” Nguyen said. “We need the City to talk to us from the very beginning. How do we work as partners, instead of being put on the sidelines?”

The organizations called the decision to locate the center in Little Saigon without prior engagement “disrespectful, short-sighted, and antithetical to the values of racial equity that we expect from a ‘Sanctuary City.’” The letter requested a hiatus on the project until city officials create an inclusive community engagement plan with the Little Saigon community, hear from the community regarding their concerns and needs, and allocate the required resources to mitigate safety, health and financial impacts from the Navigation Center.

On February 8, the Office of Mayor Ed Murray announced the center would be located at the Pearl Warren building at 606 12th Ave. S. and would open to a limited number of people this spring. While the facility is being completed, the City plans to provide similar services at temporary sites.

The center fills a gap in the city’s shelter types, as it would be a 24-hour, low- barrier shelter that connects homeless individuals to services and helps them move to stable housing, said Chow, a planning and development specialist. The center is modeled after the San Francisco Navigation Center that opened in 2015. Low-barrier means the center will have minimal requirements.

“The goal is that it’s a one-stop shelter,” Chow said. “People don’t just come in and get a bed and continually have to go out to get support. The support is largely onsite for them.”

The shelter, to be operated by the Downtown Emergency Services Center, will serve 75 adult clients who are referred by a navigation team. The dormitory-style living facility will have showers, restrooms, laundry, lockers and meals. On-site staff will include police, service providers, case management, janitors and behavioral and mental health specialists.

“The City is interested in bringing people indoors that have been outdoors for a very long time,” Chow said. “People will have mental health and substance abuse disorders.”

During their 30-day stay, individuals will store belongings at the center and can move in with a partner or pet.

“This is a big opportunity for the city to continue to communicate the barriers that people are facing, and get creative and innovative about what shelter looks like for people in this situation,” Chow said.

The Pearl Warren building is currently used by Compass Housing Alliance for 75- bed men’s shelter Operation Nightwatch, which the City would relocate. Before choosing the Pearl Warren building, the City considered locations in industrial areas like SODO. Reasons for the decision included the building’s available space, lack of environmental pollution and Murray’s plan to address homelessness in the I-5 East Duwamish Greenbelt and surrounding area, Chow said.

After months of lease negotiations, the City came to an agreement to begin using the building on February 1. The City is renting the building and plans to make basic enhancements to it, such as re safety updates and expanded shower facilities. Construction could happen in sections.

Community members criticized the City’s lack of engagement with the neighborhood prior to the announcement and asked why the City only came to them after the decision had been made. Many spoke up about the community feeling shut out from past decisions, such as the First Hill Streetcar and the Nickelsville encampment on South Dearborn Street.

Tam Nguyen questioned whether the City has considered the perspectives of Little Saigon businesses, employees, and customers.

“This is a commercial area,” Nguyen said after the meeting. “There are a ton of small shops. The consumers, the people who come to work in this area, have [City officials] thought about those points of view?”

Pham said the engagement issue goes beyond the Navigation Center.

“Outreach has never been inclusive,” Pham said. “Things don’t get translated. Things just tend to happen without conscious thought about who is actually here and who is impacted.”

“You need to take an extra step to reach out and get people to understand and know what’s happening,” Pham said. “It’s not as simple as sending out a flier.”

Attendees at the public safety meeting asked whether the City has explored other sites, has available permanent housing for the center’s clients, and how it plans to address unintended effects, such as increased public safety issues. Some asked how rules would be enforced at the center and whether weapons could be accessed.

Minh Duc Nguyen, executive director of Helping Link, said she was worried about the center’s impact on the community.

Nguyen said current public safety issues in the area—such as car break-ins, robberies, and prostitution—affect the nonprofit, which offers English Language, computer, and citizenship classes for the Vietnamese community.

“We have people from all over Seattle and King County coming for social service, language and technology needs,” Nguyen said. “Now we can’t guarantee their safety. I have clients that sit in ESL class that ask, ‘What’s happening?’ We have people shouting outside, screaming and yelling. [Clients] can’t focus on learning English.”

Nguyen spoke about her frustration with getting more public safety in the area.

“This is like the last straw that breaks the camel’s back,” she said.

Pham is concerned about the center’s indirect community impacts, particularly after an uptick in safety issues when Nickelsville was established.

“We didn’t get as much police response with the increase of sanitation and general safety issues,” Pham said. “I think the City will have to do a lot of work in talking about how [the center] will bene t the community.”

According to Chow, the City is working to ensure that there is no additional impact on the area.

Han, city liaison with the Chinatown International District Public Safety Task Force, said he hopes to start conversations about the City’s outreach and engagement with the neighborhood.

“There have been a lot of systemic issues that the City still hasn’t addressed yet,” Han said. “We have funds for capacity- building and improving communication.”

Chow said the City hopes to engage the Little Saigon community in two areas being planned: the process of referring people to the center and evaluating the center’s success and community impact.

“We don’t have all the answers right away, but all those questions—there’s so much history with this neighborhood, they are so deep, the questions and the hurt and the people being dismissed and the power imbalances,” Chow said after the meeting. “It’s our duty to take in all of these questions and also stand in the gap and ll the space with our presence.”

More public meetings with further information will occur in the spring.

Tam Nguyen said it was necessary for the City and Little Saigon to work together to come to the best solution. “If we want to move the Little Saigon district forward to be comparative with the mainstream, to make everything feel safe and the district vibrant, we want to work with the City,” Nguyen said.

“I think they do hear us loud and clear and will be more proactive in reaching out to different groups,” Pham said. “We’ll continue to work closely with [the City] in terms of impacts on the neighborhood with the Navigation Center, but also broader conversations on engagement.”