This spring, the Office of the Superintendent of Public Instruction (OSPI) awarded the International Examiner $30,000 as part of the Kip Tokuda Memorial Washington Civil Liberties Public Education Program.

The program was founded to educate youth and the broader public about “the history and the lessons of the World War II exclusion, removal, and detention of person of Japanese ancestry” through the development of resources and events that encourage critical thinking. This is the first year the program has received funding since the 2008 recession.

The Civil Liberties Public Education Program was renamed in 2014 in memory of Kip Tokuda, who passed away the year prior. Tokuda, a former state legislator and activist, introduced the bill that created the program. He was adamant that students learn about the incarceration of Japanese and Japanese Americans during WWII so that civil rights violations would not happen to other communities.

Before and during the war, Japanese people were racialized and dehumanized. Representations framed Japanese as dangerous foreigners, bucktoothed caricatures with bulging eyes. Propaganda showed Japanese men as savage and animal-like, threatening white women and the American way of life.

The media and the general public began calling for the removal of all Japanese people, including Japanese Americans. In response, President Roosevelt signed Executive Order 9066 on February 19, 1942. The order authorized the forced removal and incarceration of all people of Japanese ancestry living on the West Coast for fear of spies and saboteurs. Roughly 120,000 people, including children, were forced to leave their homes under the pretense that they needed to be “evacuated” for their own protection. More than 60% of the people removed were American citizens; of those who were not, most had lived in the U.S. for decades.

In the end, not one person of Japanese ancestry living in the United States was convicted of espionage or sabotage. But thousands of families lost their homes, businesses, life savings, and freedom.

The International Examiner aims to raise awareness about the injustices that the U.S. government inflicted on the Japanese American community during WWII. We have partnered with the Seattle Channel and 21 Progress to develop resources and host events that promote critical learning over the next two months. By sharing the continuing impacts that the incarceration had on Japanese Americans, we hope to shed light on injustices perpetuated by the media and politicians against Muslim Americans and immigrants in the post-9/11 world.

“The IE is grateful for OSPI’s support of this project,” said Ron Chew, IE board president and project director. “The Civil Liberties Public Education fund was created to share the stories of Japanese Americans, so that we never again allow something like the incarceration to happen.”

Chew suggested that anti-Muslim and anti-immigrant rhetoric “taps into fear, creating a very dangerous ‘us versus them’ way of thinking. When an entire group is seen as ‘the enemy,’ respecting civil liberties becomes less important to people. But that’s exactly what happened to the Japanese community, and look how it turned out. Understanding the climate of fear and the failure of leadership that led to the incarceration is important because it gives us a different way of thinking about what is happening now.” 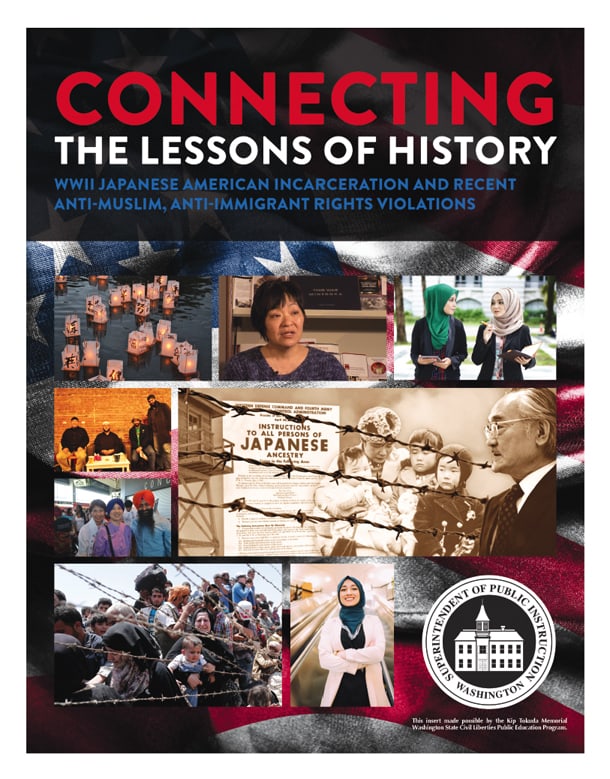 The project will deliver the following resources and events:

The first panel discussion, moderated by Frank Abe, will be held at the Nisei Veterans Committee Memorial Hall at 1212 South King Street on Monday, May 30 at 10:00am.